Since his election to the position of general secretary of Unite – Britain’s largest union, with 1.5 million members – two years ago, Len McCluskey has moved to the left in response to the pressures from below. This was shown at a meeting on Tuesday 15th January at the London School of Economics, where McCluskey delivered a militant speech on the crisis and the need for a response from the labour movement. 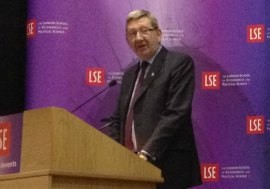 Len McCluskeyMcCluskey opened his talk by criticising the “One Nation” slogan of Ed Miliband, correctly pointing out that society is composed of antagonistic interests between the capitalists – who are interested only in profits – and workers, who are currently being asked to pay for the crisis of capitalism. The Unite General Secretary then went on to point out that all the measures introduced to provide equality in Britain over the past 150 years – universal suffrage, the welfare state, decent wages and conditions, etc. – had been won through the struggles of organised labour, not due to the philanthropy and benevolence of the capitalists and their political representatives. In this respect, McCluskey remarked, there was no point in simply pleading for equality in the current crisis. Such pleading is utopian, and real equality – including the defence of the progressive reforms of the past – can only be obtained through the organised working class once again finding its voice and struggling for real, lasting change.

Len McCluskey continued his historical overview of the labour movement by pointing out that trade unions are, in and of themselves, not a solution to the problems facing the working class. Citing the case of Taff Vale, where the trade unions found themselves blocked by anti-union legislation, McCluskey described how the class struggle was in essence a political struggle, and how the link between the trade unions and their political representation in the form of the Labour Party is, therefore, an important and necessary one. In this respect, McCluskey also later emphasised that his main demand on a Labour government would be re-establish freedoms for trade unions to organise, decide, and take action.

A whole section of McCluskey’s speech was devoted to an analysis of the working day, describing how now, as ever, the ruling class seeks to demonise the working class and the poor, creating a caricature of the “feckless” and “lazy” who survive of the charity and benefits provided by the “strivers”. In opposition to this vilification of the working class, McCluskey described the working class as it really is – the ordinary men and women in society who have nothing to sell but their ability to work; the hard-working people of Britain and the rest of the world who get by through struggle.

In the past, Len explained, the working class in Britain was mainly industrial and based in manufacturing. Today, however, things have changed. There is still a working class, but this now includes those who would previously have considered themselves “middle class”: teachers and lecturers; doctors and nurses; civil servants and many other office workers – all of these sections of society are now unionised and taking collective action in defence of their wages, jobs, and pensions. This is a powerful echo of what Marx and Engels described in the Communist Manifesto:

“The bourgeoisie has stripped of its halo every occupation hitherto honoured and looked up to with reverent awe. It has converted the physician, the lawyer, the priest, the poet, the man of science, into its paid wage labourers.”

The Unite General Secretary – who is currently campaigning to be re-elected for a further five-year term in an upcoming general secretary election – went on to describe the measures that Unite is taking in order to organise the unemployed and to help rebuild the strength of the labour movement for the challenges and struggles ahead. In particular, McCluskey highlighted the attempts by Unite to organise the unemployed, young people, and those in temporary or insecure employment through the new “community membership”, where local non-workplace branches of Unite are formed of community activists, who are given resources and support through Unite to make a change.

The Unite leader emphasised that more needed to be done to co-ordinate action across the public sector and to support the increasing industrial action in the private sector. In addition, Len McCluskey stated that he was willing to support illegal strike action and had no problem with the idea of breaking the law when it comes to workers taking action – especially given the current state of trade union laws in Britain, which are some of the most restrictive in the world, and which are simply a tool by the ruling class for use in preventing the working class from organising and defending themselves against the vicious austerity programme being implemented by the Coalition. In addition, the union leader later discussed – in response to a question about the role of movements such as Occupy and UKUncut – how it was important for the trade unions to link up with those organising direct action protests, and how it is only through the organised labour movement that these movements can gain the strength needed to be truly effective. Without such a link to the mass organisations of the working class, such movements will inevitably fizzle out, as has been seen over the last period.

When later questioned from the floor by Socialist Appeal supporters about his position regarding the calling of a general strike, McCluskey agreed that such an action was on the cards – as highlighted by the decision at the TUC conference in the autumn of 2012 to look into the “practicalities” of a general strike; however, the Unite General Secretary stated that the Unite leadership did not want to leap prematurely into a general strike, and that work was currently underway to discuss the question of a general strike with members in the branches and throughout the organisation to prepare the groundwork for such mass action.

We agree with McCluskey that the question of general strike is not one that should be approached in a light-minded and flippant manner. However, the rank-and-file of the labour movement have shown on many occasions over the past two years that they are willing to take and ready for mass strike action: the one-million strong TUC demonstration in March 2011; the co-ordinated public sector action over pensions on 30th November 2011; and the wave of militant strike action across the private sector, including the BESNA “sparks” dispute of construction workers and the action of the London bus drivers last year – all of these demonstrate the fighting stance of workers. What is lacking is an equally militant resolve from the leadership of the labour movement. In this respect, McCluskey is far ahead of his peers, and has – de facto – become the leader of the Left in the recent period; but with a union of 1.5 million members spanning almost every sector of the working class, McCluskey is in a powerful position to take an even greater lead in the calling and organising of a 24-hour general strike. Such a strike would raise the labour movement to its feet, allow workers to flex their muscles and gain a sense of their own power, and help to galvanise the movement at this vital time.

Finally, McCluskey sent a clear message to Ed Miliband and the Labour Party leadership, stating, categorically, that Unite would not tolerate a return to Blairism. However, the Unite leader later clarified, in response to questions about the trade union-Labour link, that the Labour Party is the “only game in town”, and that the unions should be strengthening the link, rather than seeking to weaken it, pointing out that a weakening of the union-Labour link was exactly what Blair and the right-wing within the Labour Party have sought over the past two decades. Socialist Appeal supporters questioned McCluskey on what concrete steps Unite were taking to reclaim the Labour Party for the working class, and the response was positive: the Unite leadership are looking for 5,000 members to get involved in the Labour Party at every level; political education schools are being set up to train members in this work; and the political campaign of Unite is being co-ordinated and led at a regional and national level.

Len McCluskey also responded to another question from the audience about the pernicious role of Progress – the Blairite, right-wing tendency in the Labour Party – who are actively organising to get their own candidates into the Party as MPs and councillors. McCluskey emphasised that Unite is working with other Labour-affiliated unions to get more working class, trade union MPs and councillors into the Labour Party. In addition, McCluskey stressed the need for the current crop of Labour councillors to reject making cuts in their councils on behalf of the Coalition, rhetorically asking the audience, “just imagine what would happen if all of these councillors decide to reject the cuts.”

These developments regarding Unite and the Labour Party are a very positive step forward. However, Len McCluskey and the Unite leadership need to go further by clarifying what policies the trade unions should be demanding from the Labour Party leaders. There was plenty of talk from the Unite General Secretary on this evening about the need for a “radical” programme that made the Labour Party and trade unions relevant to workers and youth; in addition, the word “socialism” was not avoided by McCluskey. However, when asked by Socialist Appeal supporters about what “socialism” meant to him, McCluskey dodged the question. Similarly, there were many times during his opening speech when McCluskey lambasted “neo-liberalism”, implying the possibility of “responsible” capitalism – a demand that is, as McCluskey himself had noted earlier in his speech, completely utopian at a time of crisis when there is only one question: who pays for the crisis?

Len McCluskey’s speech presented a militant stance against austerity and the Coalition government. Such militancy is to be applauded, especially from the leader of Britain’s biggest trade union. However, we must be clear that militancy is only one side of the solution. The working class must also be armed with a clear socialist programme – including the nationalisation of the banks and the other commanding heights of the economy in order to provide full employment under a democratic plan of production – which must be taken into the Labour Party, in order to put an end to the anarchy of capitalism.