Greece
Share
Tweet
Held shortly after the Greek trade union leaders have signed a disappointing agreement with the bosses, this year’s rallies were small but the workers and youth present expressed a militant mood.

In Greece on May Day there were two rallies in Athens and two in Thessalonica, organised by the Greek Confederation of Workers (GSΕΕ) and PAME (the Communist Party union front). 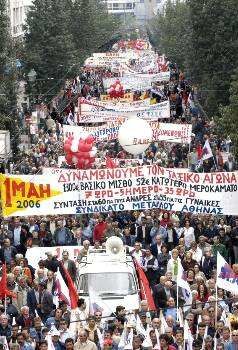 This agreement was signed just after the biggest general strike of the last few years had taken place. According to this agreement a worker’s daily wage will increase by a mere 0.77 euros, while for the past ten weeks the price of petrol has been constantly going up. And Greece already is at the top of the European league when it comes to imposing low wages on the workers!

At the GSΕΕ rally there where about 2.000 people present, most of them being supporters of the “Synaspismos” and of the Greek Social Forum. The unions controlled by PASKE (the PASOK union front) attracted very few people to this rally, and without any enthusiasm.

The PAME rally, however, was bigger and expressed a much more militant mood. There where about 6-7,000 people present who heard the daughter of Che Guevara, Aleida Gevara, speak from the platform calling on the youth to follow the example of her father.

The comrades of the Greek Marxist Tendency intervened at both rallies in Athens, selling their journal, Marxistiki Foni. Also the Hands Off Venezuela (HOV) campaign was present at both rallies with tables and stalls. Many of the workers that took part in the two rallies bought copies of Marxistiki Foni and also showed big interest in the material of the HOV campaign. The comrades sold in total 122 papers, 15 DVDs on Venezuela, gave out 800 leaflets, met several people interested in finding out more about Marxism and also collected many signatures for HOV campaign.