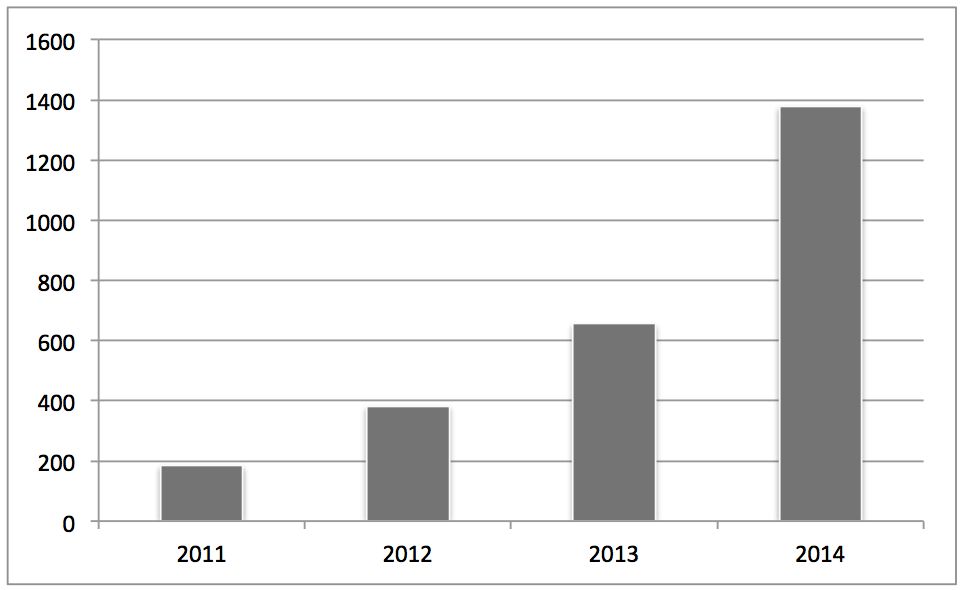 Despite all the Keynesian experiments and the monetary stimulus, China has failed to escape the global economic crisis. In 2014 its economic growth dropped to 7.4%, the weakest in 24 years. For the first time in 16 years growth missed the government’s annual target (7.5%).

The Chinese government has tried to paper over the slowdown in the economy by referring to it as a "new normality of economic growth" in which China’s "structural adjustment is progressing steadily".

However, given the reduced rate of growth, referring to it with a different name does not change the essence of the situation for the Chinese workers, who are experiencing the slowdown in the closures of factories, wage arrears, slower growth of minimum wages, and unpaid social security. Thus, in the year of weakest growth, China has seen the largest number of workers’ strikes and protests.

Figure 2 Number of strikes and protests in China by quarter 2011-2014According to the data collected by China Labour Bulletin, there were at least 1378 workers’ strikes and protests in 2014, more than double the 2013 figure (656) and and three times that of 2012 (382). There was a dramatic upturn in the last quarter of 2014, with 569 strikes recorded, an acceleration on previous quarters and almost four times the number in the same period of 2013. 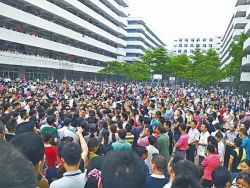 Yue Yuen workers on strikeAlthough these figures partly reflect a rise in the reporting of actions by the workers themselves, - who increasingly use cheap smartphones and social media in order to draw a wider audience - there is clearly an increase in working class struggles and a sharpening of class contradictions. This is reflected not only in the continual growth of strikes, but also in the outbreak of the largest strike in recent Chinese history in Yue Yuen shoe factories with more than 40,000 workers participating last April. 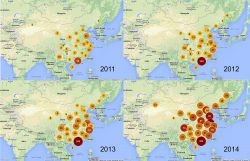 Figure 3 Number of incidents by province 2011-2014Although the Guangdong province in the south continues to be the centre of the workers' movement in China, it only accounts for 22% of the total, largely decreased from the 37% it represented in 2013. This is not due to the emergence of several sub-centres - although Heilongjiang, Shandong, Jiangsu and Henan do see a leap in the number of strikes - rather, it is because of the upsurge of strikes all over China. 22 out of 31 provinces have increased their share of strikes in 2014. Factories moving to more inland areas seeking cheaper labour, the far-reaching impact of the economic slowdown and the increasing class-consciousness of Chinese workers, are the reasons why industrial actions are becoming more and more evenly spread across the country.

Since 2009, the housing market has continued to prosper, and large scale construction driven by the Keynesian policies has become one of the driving forces of China’s economy. But this came to an end at the beginning of last year. The housing market is now facing a deepening slump. Saddled with reduced sales and weaker credit availability, many developers are in a precarious financial situation, which in turn explains the growing wage disputes.

More than 90% of the strikes in the construction sector in 2014 were related to wage arrears. And they were more concentrated in less developed provinces in the northeast and inland areas, where the housing bubble burst more quickly .

Also, there were 251 strikes in the transport sector, rising from 185 in the previous year. Among these, there were the truck drivers’ strikes in Yantian Port, in Shenzhen, just across the strait to Hong Kong, and in Beilun Port in Ningbo, Zhejian, as well as the taxi drivers’ strikes which culminated in a cross-city strike in early January 2015. Whilst the oil price is falling the high charges by taxi companies and competition from unlicensed drivers have become the focus of taxi and truck drivers.

Another important development was the rapid growth of strikes and protests by teachers, up from 43 in 2013 to 82 last year. More than half of these took place in the last quarter. The most famous were the protests in Heilongjiang province in northeast China, where around 20,000 teachers from middle and primary schools came out on strike in cities and districts around the capital Harbin, protesting low pay and pension irregularities. Protests of teachers in state-run schools, mainly broke out in less advanced areas including Xiaogan and Enshi in the Hubei province, Yulin in the Shaanxi province, Baoto in Inner Mongolia and were mainly over low wages, lack of formal employment status, pension and housing funding contributions and over performance-based wage systems. Because of the relatively weak finances, the local governments failed to increase the wages or pay the pension and housing funding contributions for the teachers.

In addition, there were also strikes over low wages, wage arrears and abusive management in privately-run schools and nurseries. Whereas the teachers in the past were relatively reluctant to take strike action, they have become radicalised by the pressures on living standards as well as due to inspiration from the actions of other teachers. 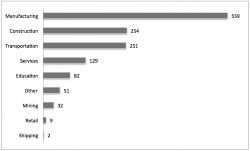 Figure 4 Number of incidents by industry in 2014There was also an increase in miners’ strikes and protests, after a nearly two-year-long slump in China’s coal industry. According to Wang Xianzheng,chairman of the China Coal Industry Association, more than half of China’s coal-mining enterprises are now struggling to pay the wages of their workers, and more than 70% of China’s coal mining companies are making losses. The main focus of the miners is on wage arrears and pit closures. 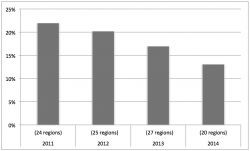 Figure 5 Increases in the minimum wage in China 2011-2014cross all industries, the main demands are for the payment of unpaid wages, wage increases and compensation, which account for 73% of the strikes recorded. Together with the slowdown in economic growth, there is also a decline in minimum wage growth. Only 20 regions (the fewest since 2011) increased their minimum wage by an average of only 13.1% (the lowest since 2011) in 2014. Apart from wage issues, more and more workers are also demanding that the employers pay for social security and housing fund contributions, as was seen in the case of the Yue Yuen strike. 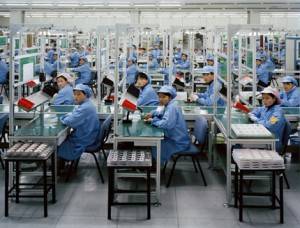 he rapid increase in industrial unrest is clearly a threat to the Chinese ruling class. Whereas in previous booming years the government had tried to play the role of negotiator, it is also increasingly responding with repressive measures. There has been a clear increase in police interventions and arrests during the strikes and protests. For instance, in the Yue Yuen strike, the police not only beat some of the striking workers severely, but also went into the factory with police dogs to force the workers back to work.

At the same time the government is trying to control the movement by putting pressure on labour activists and NGOs who are arrested more frequently, detained for longer and in general harrassed more. The main aim of this is to "guide" the workers towards the official trade union federation, the All-China Federation of Trade Unions (ACFTU),  which is the only legal union in China.

As a counter-weight to the independent movement of the workers the state is trying to create a "safety valve" for the pressure that is building up below the surface.  For instance, in 2012 in Shenzhen, in the Guangdong Province, the workers managed to win the right to direct elections of the union negotiators in 163 enterprises. The state countered this with the new Regulation on Enterprise Collective Consultation and Collective Contracts implemented on 1 January 2015, according to which the official trade unions will be the only officially sanctioned negotiators on behalf of the workers.

The further slowdown of the Chinese economy will result in a further worsening of wages and working conditions, which are already the main factors causing the present rise in strike levels. More importantly, it will lead to growing unemployment and bring more uncertainty in the lives of the workers. As Premier Li Keqiang recently stated, according to official estimations, the Chinese economy needs to grow by 7.2% a year to ensure jobs for the 10 million new workers that enter the labour market each year. This year the growth rate is likely to fall below this threshold, and there are already signs that point to rising unemployment.

All of these elements will lead to more strikes and protests and bitter struggles, in which the workers will start to organise and unite on a higher level. China is now entering an era of the "new normality", not only of economic growth, but also of internal contradictions and class struggle. The working class in China is awakening!