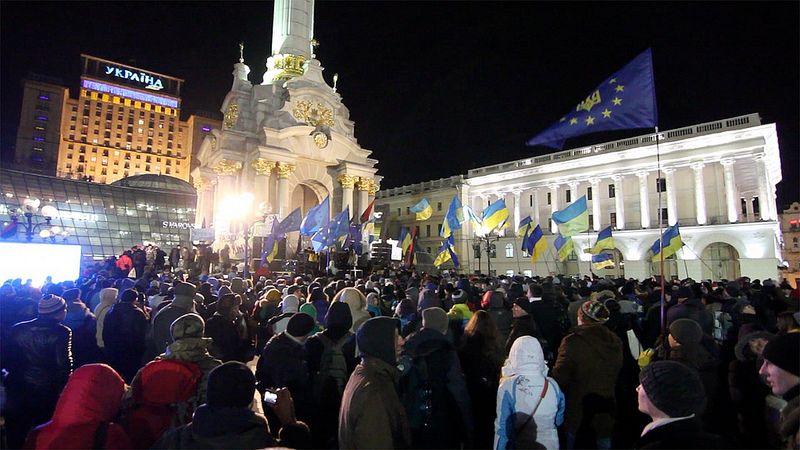 In the mass media, the demonstrations in the Ukraine are presented as the desire of the Ukrainian people for the country to join the European Union. However, anyone who has followed Ukraine in the last two decades can understand that the grievances are not limited to the question of joining the EU.

The massive demonstrations in the capital city of Kiev started after the Ukrainian administration rejected a European Union proposal for integration. On November 21st, spontaneous demonstrations began around Kiev, leading to a larger rally of 100,000-200,000 on Sunday, November 24. While the ruling Party of Regions initially dismissed the protesters as provocateurs, they kept coming back in thousands throughout the following week.

On the night of November 30, the Berkut (riot police), called in from the regions outside the capital, were given orders to disperse all protesters in central Kiev. What followed was the most violent police crackdown in Ukraine’s history with 79 reportedly injured, mostly students and 9 arrested. Not only protesters, but some bystanders present in the centre of the city were caught up in the police reaction. The administration proceeded to ban all demonstrations in the central square Maidan Nezalezhnosti.

The next day, an estimated 400,000-800,000 came out on the streets in Kiev to protest against the police repression. The ruling authorities had tried to strike fear into the protest movement by making it illegal and using riot police. However, as we have seen many times before, this brought a new energy into the movement; further galvanizing it against the regime.

The movement has continued up to today, with nightly meetings and the blocking and occupation of public buildings including the Kiev City Council. The movement had also been seen on some level all over Ukraine. On December 8 a reported 500,000 people came out in Kiev, most notably to protest against the police repression, according to polls.

However, it is true that many aspects of this movement have been controlled by right-wing forces such as the opposition oligarch parties Batkivishina, UDAR, and especially the far-right Svoboda. Should we therefore classify this movement as reactionary, that is to say, contrary to the interests of the Ukrainian people? In order to understand this, we need to understand the material and political conditions at work.

The collapse of the USSR and the restoration of capitalism led to rampant privatization of Ukrainian industry in the 1990s, which was encouraged by the IMF, the United States and the European Union. This bred a class of super-wealthy owners (known as oligarchs), who took over state assets for next to nothing and left the country in a very precarious condition economically. The Ukraine lost more than 60% of its GDP from 1991 to 1999. With this came massive unemployment and falling living standards. By 1997, life expectancy declined by four years from the level it was in the 1980s, and has only recently returned to those levels. Looking at only the numbers, one could hypothesize that Ukraine had gone through a bloody civil war.

The situation of the Ukrainian people has only been getting worse since the start of the recent economic crisis. The official unemployment figure stands at 8.6%. Millions of Ukrainians have gone to Russia and the European Union in search of better paid jobs, this trend having already started in the 1990s. However, with the economic downturns in these countries, it is becoming more and more difficult for Ukrainians to find decent work over the border.

The demand of the Ukraine to join the EU is an expression of the people's frustration at the continual destruction of their lives by the oligarchic capitalist system since independence. For them, Ukraine joining the EU represents a chance to escape from the miserable status quo. Integration in the EU represents a mirage of raising the living standards to the levels in Western Europe. The supporters of EU integration often hold out the prospects of EU investment creating jobs, the ability to move to other EU countries for better paying jobs and an end to government corruption.

These hopes are contradicted by the fact that the EU is in the midst of a colossal economic crisis. This is not just limited to the extreme examples of Spain, Greece or Italy; even the people in the more wealthy countries of Scandinavia and Germany are facing a fall in their living standards as a result of unemployment and austerity cuts. When Europe is losing its productive capacity every day to outsourcing and downsizing as a result of the crisis of overproduction, it is hard to imagine that more industry will come to Ukraine unless Ukrainian workers are forced to accept working conditions similar to those of the competitive markets. The most competitive (that is, the one with the highest profit margin) markets are those in the Third World where the working conditions are the harshest.

New EU members from Eastern Europe including the Czech Republic, Slovakia, Hungary, Bulgaria, Romania, Poland and the Baltic states are all facing massive austerity measures backed by the EU leaders and the bankers. The austerity imposed on those countries is what is on the table today for Ukraine.

However, the living conditions in Ukraine have deteriorated so much, and prospects are so bleak, that maintaining the status quo is no longer an option for many Ukrainians. So in the end, they are pushing for integration in the EU; for them, Ukraine joining the EU represents a chance for real change.

These events were unexpected to the ruling oligarchs of the Party of the Regions. This is a bourgeois party financed by a group of oligarchs based in the coal-rich Donbass area who make up a majority of the party lists. In their election platform, the Party of the Regions actually put EU integration on the agenda. However, pressure from the stronger Russian government to join their customs union, as well as unfavourable aspects in the EU deal, have compelled them to reject the proposals. Russia’s market accounts for a quarter of Ukrainian exports and the Russian government has shut off the gas supply to Ukraine several times, including under a Party of the Regions government.

By resorting to violence in order to try to crush the protesters, the authorities only gave the movement a new impetus and caused a crisis in their ranks. The violence of November 30 caused some PoR MPs and party aids to resign, a handful denouncing the party publicly in the process. Perhaps most surprisingly, the pro-government TV channels owned by PoR oligarchs Victor Pinchuk and Rinat Akhmetov covered the repression almost fully, even broadcasting the most shocking incidents.

President Yanukovich continues to call for public calm and for an investigation of the riot police responsible, but Ukrainians are by now all too familiar with the results of these government “investigations”. 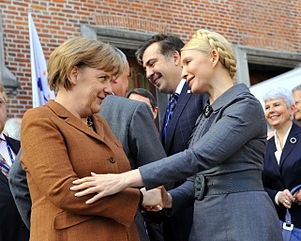 Yulia Tymoshenko and Angela MerkelBecause the Left and the trade unions are very weak in the Ukraine, the pro-West oligarch parties (UDAR and Batkivshyna) as well as the far-right (Svoboda) have used this opportunity to occupy a vocal lead in the movement. Opposition figures such as Klitschko (UDAR), Tymoshenko, Yatsenyuk (both Batkivshyna) and the far-right Tahnybok will gain support from some of the masses. They are able to do so for the same reasons that they get seats in elections: they are the most organized and have the most financing. However, neither these people nor the European capitalists, have anything to offer Ukraine other than further austerity and exploitation.

The Weakness of the Left, the Communist Party and the Far Right

Perhaps the greatest reason for the weakness of the Left in the Ukraine has been the role played by the Communist Party of the Ukraine since independence. While the party enjoyed major success in the hyper-inflation years of the 1990s, their Stalinist leadership adopted a program of serving the interests of the ruling oligarchs. And while they saw a resurgence in the parliamentary elections last year, in parliament they continued to follow the lead of the PoR, on which they depend for funding. In short, any serious follower of Lenin would say that he would rather have his statue fall than have it defended by these people.

In some pockets of Ukraine, there are honest CPU militants; although anyone who poses a threat to the bureaucracy is expelled as soon as they can get to the podium. In typical Stalinist style, Petro Symonenko while initially completely siding with the PoR, has now called for a referendum on the EU question. Just recently during a parliamentary session, a CPU MP denounced European values as those of “gay marriage” and “African criminals”.

This was literally the discourse of the far-right Svoboda Party until they decided opportunistically to join forces with the pro-western oligarchs in occupying the main square in Kiev. This is clearly their bid to gain legitimacy with western capitalists who might normally be turned off by some of their racist, xenophobic, homophobic and anti-Semitic rhetoric.

The Svoboda party, originally quite marginal, has grown in the recent years under the rule of the pro-Russian PoR. They achieved a notable success in the last year’s parliamentary elections gaining around 10%. Their base is in Western Ukraine from where they get their funding from local businessmen as well as the Ukrainian diaspora. In their militant ranks are various neo-Nazi gangs who have be responsible for many violent assaults on Left activists, and even a few cases of murder.

Their taking down of Lenin’s statue or even their desecration of the graves of the massacred Arsenal factory workers by these thugs is not surprising. Their claim to represent “real Ukrainian morals” is an insult to the millions of Ukrainians who died or were forced into slavery during the Nazi invasion of World War Two. Unfortunately, the Left movement is not strong enough to openly confront them, so they will continue to be a significant obstacle for the time being.

The people protesting in late November saw the EU as a change from the status quo; a change from the oligarchs running their country since independence. But the violent police repression has given the movement another dimension. Alongside the call for new elections and the resignation of the President one can hear calls for a general strike. Students have put forward educational demands as well. In fact, at the student demonstrations in Bessarabsky Rinok, they initially rejected the participation of any of the parties.

The pro-western oligarchs may come to power on the backs of this movement, but they have very few solutions to the crisis. What they are fighting for is to kick out the Donetsk based oligarchs, to take their place and to enrich themselves. This could be seen clearly when they were in power after the “Orange Revolution” in 2004. Was the government really less corrupt? Did the lives of the Ukrainian masses improve? The fact remains that the social gains made by the people in EU countries were not given to them by some enlightened ruling class. They were won by years of organized workers’ struggles.

For the Left, it is important to distinguish between the masses who are demonstrating against the government and the right-wing politicians who are trying to take advantage of the mass movement for their own ends. The weakness of the Left and the trade unions, the sell-out of the Communist Party to the Donetsk oligarchs and the influence of both Russian and Western imperialism has immensely complicated the situation.

However, when things are set in motion, things tend to change: the situation acquires a motion of its own and the ruling class are less effective in planning their responses. The masses will draw their conclusions. In the end, in order to go forward, the Ukrainian masses, like the masses in all other countries, will have to learn through struggle that what is required is not to seek solutions either in EU integration or in closer links with the Russia of Putin, but to unite with workers across Europe in a struggle against capitalism and for a Socialist Europe.