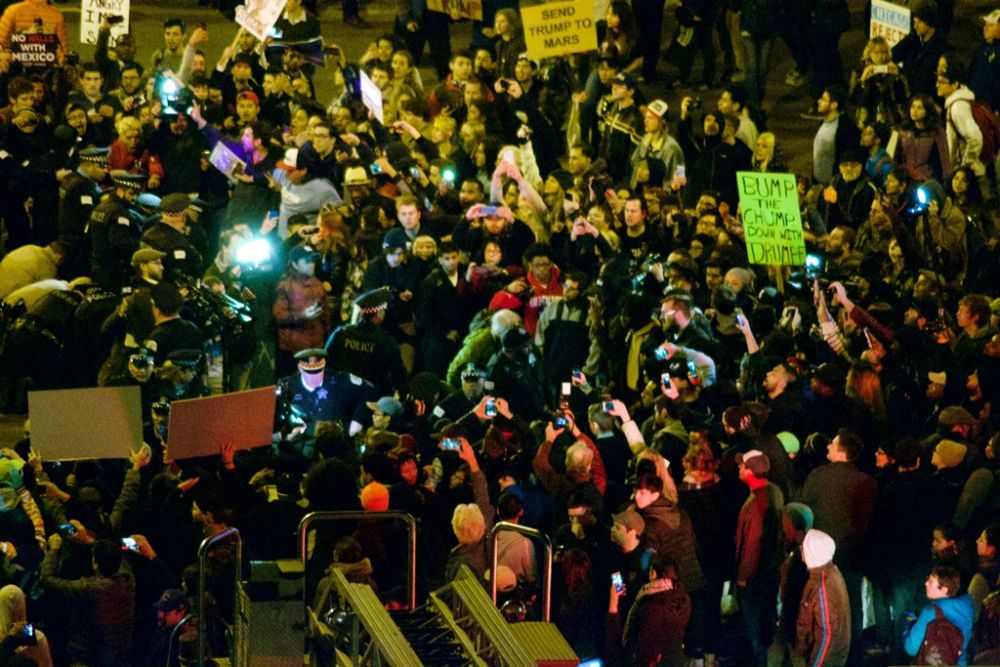 On March 11, the workers of Chicago, with the youth leading the charge, gave Donald Trump a very rude awakening, which was celebrated by activists and revolutionaries around the world. Trump, who had spoken earlier that day at a rally in St. Louis which featured physical violence and death threats against protesters, must have expected his visit to Chicago to proceed similarly. After hearing about St. Louis, however, it quickly became apparent that ordinary Chicagoans had different plans for Trump and his rally.

Thousands of protesters converged on the venue and overran the floor and stands, with thousands more on the streets outside, Trump hastily cancelled the event shortly after his arrival, citing “safety concerns.” Given the level of violence and invective that has characterized Trump’s campaign events to this point, it is clear that Trump’s worries about safety were entirely self-motivated. The Chicago Police later confirmed that it was Trump, not they nor any other public agency, who made the decision to cancel. The very people who Trump so disdains intimidated him to such a degree by their presence that they forced him to flee the city in panic and disgrace.

The crowds of demonstrators inside and around the venue met the announcement with jubilation, and the news spread like wildfire across social media. Several of Trump’s upcoming campaign stops—including events in Cincinnati and Jacksonville—were subsequently cancelled as well, in fear of a repetition of his experience in Chicago.

In the aftermath of this defeat, Trump’s campaign has resorted to various forms of subterfuge and misdirection to safeguard against a repetition of the events in Chicago. A recent appearance in Youngstown, Ohio was actually a surprise event, in which security vetted ticketholders and bused them to a secret location to attend the rally.

But if Trump can learn from this experience, so can the workers. Relatively small and isolated groups of protesters have been a common sight at Trump events throughout the campaign, enduring beatings, arrests, intimidation, and all other manner of abuse in order to take a stand against the hate-inciting speeches of this right-populist demagogue. What made Chicago such a success was the mass character of the demonstrations. This itself would have been impossible were it not for the initiative of high school and college students, many of them veterans of the recent Black Lives Matter demonstrations in Chicago, who pulled the anti-Trump action together on their campuses and over social media. With few resources at their disposal, the organizers succeeded in obtaining and analyzing the floor plans of the meeting hall, identified choke points, and coordinated street demonstrations which sent Trump fleeing the city with his tail between his legs. 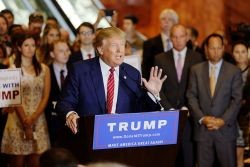 Nearly eight months remain until the general election, and the lessons of this success need to be translated into action for the duration—and beyond—if Trump were to actually win the presidency. Our sisters and brothers in Chicago have set a powerful example that we must build upon. Trump may not be a fascist, but his campaign, which has gained the support of the KKK and various neo-Nazi outfits poses a clear threat to all working people in the United States. His racist, anti-immigrant, anti-Muslim, anti-women rhetoric serves little purpose other than to divide the working class against itself in the face of the exploitation, oppression, and attacks of the capitalist class as a whole, while stoking enough fear and vitriol to propel his electoral success. In the wake of right-wing terror punctuated by the Charlestown and Chapel Hill murders early in 2015, and the shootings of five Black Lives Matter protesters in Minneapolis late last year, we cannot ignore this menace.

The leadership of the labor movement, with all of the money, membership, infrastructure, and professional organizers at their disposal, must absorb the lessons of Chicago’s battle against Trump. If youth armed with nothing but social media posts and their own bodies can silence Trump in a single city, then surely the might of the entire labor movement can shut him out across the country. Union workers should refuse to do work for Trump’s campaign—no printing of his literature, recording or transmitting of his speeches, no setting up stages, no transporting his campaign’s members and infrastructure!

The unions must take the lead in coordinating demonstrations against his campaign events across the entire country, and allot the substantial resources at their disposal accordingly. It is crucial that they take the lead in combating Trump’s poisonous rhetoric by loudly and clearly emphasizing the need for solidarity throughout all groups within the working class against the capitalists and those who would divide us in order to more effectively rule us. The unfortunate truth is that Trump’s nativist and protectionist message is getting an echo in large part due to the fact that it mimics the reactionary “buy American” message put forward by many labor leaders over the decades. This must be corrected! As for the unions’ responsibility on the political side of the struggle, we must explain the need to break with the parties of big business and to build a mass socialist party of the working class. (read more on this here)

Trump’s presidential campaign is the American expression of the polarization that has come to characterize capitalist politics around the world. The protracted and deepening economic crisis and resultant cuts to public services, layoffs, and attacks against working people has destabilized the capitalist political order. In the absence of an effective political lead by the workers’ own organizations, many people—pushed to desperation by the crisis and, in part, motivated by disgust with the status quo—are giving right populism a chance.

There is no doubt that among these elements there is a layer of backwards and ignorant people—itself a condemnation of capitalism’s inability to raise the cultural level of humanity any further. However, the problem cannot be explained away merely as the result of the allegedly “inherent racism” of those who support the right wing. This kind of xenophobia is ultimately a symptom of competition over artificially scarce resources and the hopelessness that capitalism engenders.

In order to defeat the reactionary movement around Trump, working class solidarity and mobilization are of paramount importance. In order to prevent Trump and those like him from making things even worse for the majority, we must use this solidarity to put an end to the capitalist system once and for all. A socialist society, built on prosperity and security for everyone, will eliminate the material basis for all forms of exploitation, discrimination, and oppression, which we currently suffer under capitalism.