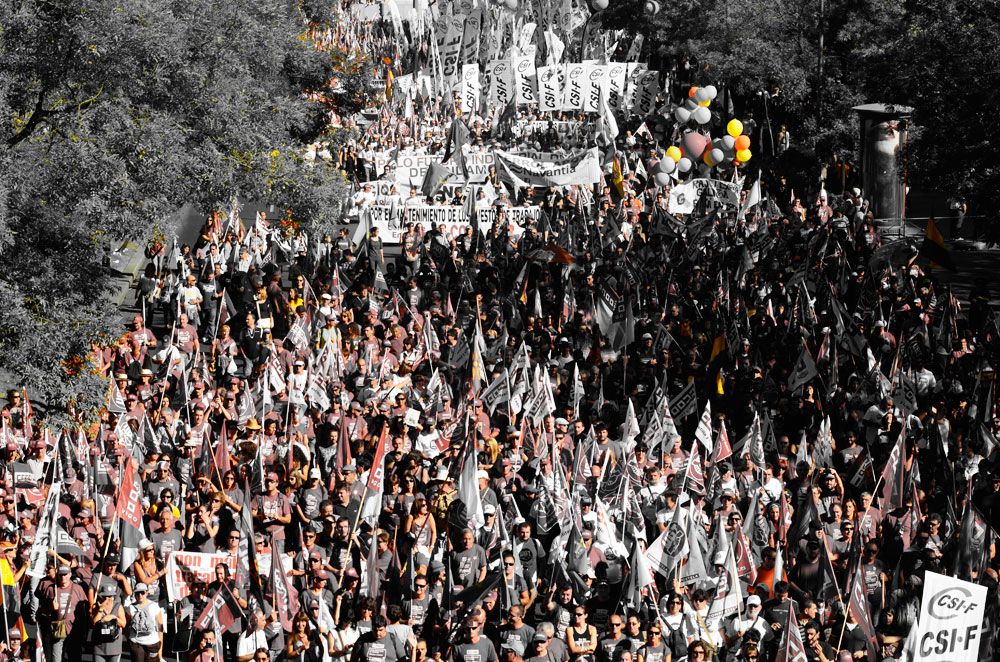 Hundreds of thousands took to the streets of Madrid on Saturday, September 15, to protest against the austerity cuts of the right-wing Spanish government of Mariano Rajoy in what is likely to be the beginning of a hot autumn of class struggle.

The demonstration, called by the main trade unions CCOO and UGT together with a whole range of sector unions and other organisations and movements, included tens of thousands who had travelled five or eight hours by bus to be there. The march had been divided into six separate "tides" representing the struggle against cuts in education (green tide), healthcare (white), public services (black), trade union rights (red), orange (social services) and abortion rights (violet).

Some of these movements have been active for over a year, fighting different aspects of the government’s austerity plans. It is impossible to calculate how many were present, and the trade union leaders did not give a specific estimate, though some talked of over half a million and others mentioned the figure of a million demonstrators.

There were also separate demonstrations in the Canary Islands and Mallorca. In any case this was a huge demonstration of anger at the accumulation of attacks against public services and acquired rights and it was seen as the direct continuation of the mobilisation of the miners and civil servants in July but also the preparation of harsh struggles to come.

Spain is usually completely dead from the point of view of politics and the class struggle during the month of August when temperatures reach above 40 degrees in many regions. However, this year was different as the economic crisis dominated conversations everywhere, even amongst those lucky enough to be able to afford a summer holiday of some sort. The threat of a full bail out of the Spanish economy by the European Union and the additional austerity cuts which will be imposed in exchange was hanging over people's heads.

On August 7, a group of a few hundred activists of the Andalucía Workers' Union (SAT), led by regional United Left MP Sanchez Gordillo, entered two big supermarkets in Cadiz and Seville and left with dozens of shopping trolleys full of basic foodstuffs. Their aim was to highlight the extreme conditions imposed on many of the unemployed who don't even have enough to eat. In defending their action, Gordillo explained how they wanted to highlight the fact that "the crisis affects people with names and surnames and national ID cards," adding that "in Andalucía, "35% of all families in the big cities live below the poverty line, there are 1.2 million unemployed, 3 million poor and over 200,000 families where they are all unemployed and do not receive any subsidy."

While the bourgeois media launched a hysterical campaign against the actions of the SAT and Gordillo, the majority of people expressed their sympathy. This was just a symbolic action, but one which drew attention to the real human impact of the economic crisis and highlighted the bankruptcy of the system. "In this time of crisis, when they are expropriating the people, we want to expropriate the expropriators, that is, the landowners, banks and big supermarket chains, who are making a mint in the middle of the crisis," argued Gordillo. In the same way as with the struggle of the miners, the radical actions of the SAT, which were followed by a march on foot throughout the Andalucian provinces, gained widespread public support as they were seen as offering a concrete way of struggling.

August ended with the government announcing an end to a 400 euro subsidy to the long term unemployed who had lost all other benefits, to then be forced to partially retreat in the face a massive outcry of public opinion. This was followed by the news that the government had decided to withdraw free healthcare from undocumented migrants, starting on September 1, a measure which could affect about 150,000 people, once again hitting the most vulnerable. Thousands of doctors and other healthcare professionals signed a public pledge to resist this measure and continue offering healthcare to this group, even if it meant breaking the law. The school year started this month with protests by teachers, students and parents at all levels, from primary to university education and strikes are already planned. Monday, September 17 saw a national strike of railway and underground workers against privatisation which paralysed the country’s trains. 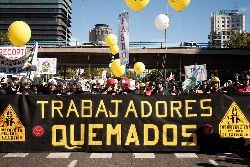 Fire fighters, 15 September. Photo: Alejandro Garcia MontoroIn fact, the trade union leaders had decided to call the 15S [15 September] march on Madrid in July, when the pressure for a general strike was mounting. The arrival of the miners' march in Madrid (Striking miners get heroes' welcome in Madrid) had opened the way for a semi-spontaneous movement of the civil servants and then the huge demonstrations on July 19 (Spain: Unprecedented protests against austerity cuts). That mood has not dissipated and the demonstration on September 15 was yet another show of strength of the movement. The key question now is: what next? The trade union leaders are still resisting the pressure to call for a general strike but it is difficult to see how much longer they can hold the line. Instead of offering a clear plan of mobilisation and setting as a goal the removal of this government, they are insisting on demanding a referendum on the austerity measures, which Rajoy has no intention of calling.

Already a demonstration has been called for September 25 under the slogan of “Occupy Congress”, later changed to “Surround Congress.” That the ruling class is worried is shown by the fact that a group of activists were arrested during the demonstration on Saturday in Madrid just for unfurling a banner with this slogan.

The situation of the Spanish economy is still dire and getting worse every day. Gross Domestic Product contracted another 1.3% in the second quarter. Capital outflows from Spain reached a record 75 billion euro in July (beating records of 56 billion in June and 43 billion in May). On an annualised rate this would represent a total capital outflow equal to 50% the country's GDP (in comparison to 23% of GDP in Indonesia at the peak of the 1997/98 crisis). It has already been agreed that Europe will make up to 100 billion euro available to Spain for the bailing out of its banks, but the details of this partial bail out have only now been agreed and no money has actually been transferred. The Rajoy government wants to delay the inevitable, a full bail out, as long as possible, partly out of political calculation (early regional elections have been called in the Basque Country and Galicia), but this might just make the whole situation worse as investors are voting with their feet.

The housing crisis and its impact on Spanish banks has not yet reached its lowest point, while the crisis of the autonomous regions is now exploding. Catalonia has asked for a bail out from Madrid of 5 billion euro, while Valencia needs another 4.5 billion. This means that just two regions would eat up half of the regional bailout fund set up by the national government. This, in turn, is fuelling centrifugal tensions which the reactionary Spanish ruling class has never been able to solve in a progressive way, as shown by the 1.5 million strong demonstration in Barcelona in favour of independence.

When finally the government is forced to ask for a full bailout, this will come with strict conditionalities, meaning more austerity cuts. In the current context that could lead to an unprecedented social explosion which could even, at a certain point, bring down the government.

The most recent opinion poll by the Cadena SER shows a further collapse in the voting intention for the ruling Popular Party to 31% (down from 44% in the November 2011 general election), but continues to reveal that there is no support for the main opposition Socialist Party (PSOE) which has pursued a policy of calling for national unity, and which only gets 24.8% (down from the disastrous 28.7% in November 2011). The same poll gives United Left 11.3% (up from 6.9%), but others have put the left wing coalition at 12 and even 13%.

These figures do not give the full picture of the enormous crisis of the regime which Spain is undergoing. It is not only that the majority of the people are questioning the economic system (89.1% say they are dissatisfied with the functioning of the economy), but also all of the institutions of bourgeois democracy are extremely discredited. A massive 71% are dissatisfied with the functioning of democracy in general, and an even bigger 82% have no confidence in the Spanish government. A separate opinion poll by the official Centre for Sociological Studies in July, showed how 88% disapproved of the way political parties are working, 88% the banks, 81% parliament and 69% thought the justice system was working badly or very badly.

In these conditions a clear and bold anti-capitalist programme would allow United Left to capitalise even more on the growing discontent with capitalism and bourgeois democracy. This will be the main challenge at its forthcoming federal assembly in December, where the Marxists of Lucha de Clases will participate defending the need for a programme which represents a clear break with the capitalist system and prepares the organisation for the revolutionary events which are going to unfold.