Pakistan
Share
Tweet
Comrade Manzoor was arrested on a demonstration this morning, after leading many demonstrations throughout the Punjab. We have just received this message from Pakistan. Comrade Manzoor Ahmed, the Marxist MP is also president of the Pakistan Trade Union Defence Campaign. 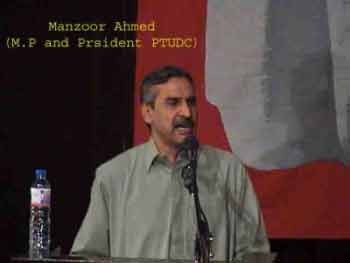 Comrade Manzoor was arrested today in Gujranwala, a city 60 km north of Lahore. He was leading the Long March from Lahore to Islamabad which started on November 13 from Lahore to Kasur and Okara.

In the second leg of the long march they reached Faislabad and then Sheikhupura. Yesterday they moved from Sheikhupura to Gujranwala.

Today they were gathering at the old railway station in Gujranwala to move on towards Gujrat leading thousands of people including PPP workers, youth and masses.

This time the police attacked heavily on the workers and used brutal measures to disperse the rally. The workers valiantly fought back against the police but the police was able to get hold of Comrade Manzoor along with other local leaders in Gujranwala.

Now Comrade Manzoor is in police custody at the Model Town Police Station in Gujranwala along with hundreds of other workers and party activists.

We appeal to all workers and labour organisations to send messages of protest to their local embassies. Telephone calls should be made to embassies and consulates in order to put the necessary urgent pressure on the regime to secure Manzoor's release. You can find information on the Pakistani embassies and consulates in your country here. Send messages of support and solidarity to info [at] ptudc.org.