Malaysia
Share
Tweet
We have received a request for solidarity from activists in Malaysia involved in a protest bike ride and who have faced constant police harassment. We call on our readers to express support and take part in the protest aimed at the Malaysian authorities. 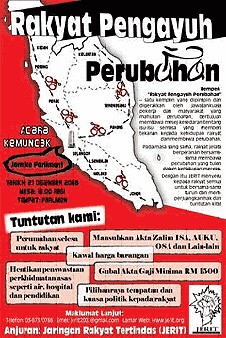 Oppressed People's Network (JERIT) has initiated a nationwide cycling campaign that carries the theme of ‘Rakyat Pengayuh Perubahan' which explains the rakyat drives the change. The participants in this campaign come from various backgrounds such as from plantation workers support committee, industrial workers' coalition, farmers, urban pioneers, students and youth groups.

Other NGOs, trade unions, human right groups and political parties also will be a part in this campaign. Grassroots coalition Jaringan Rakyat Tertindas (Jerit) is riding the unique route to advocating change - by cycling across the country. The ‘People the force of change' campaign is one of the Jerit's ways of raising awareness about issues like food shortages, global food shortage, environmental problems, draconian laws and the financial crisis etc - in an eco-friendly way to boot.

The cycling campaign was inspired by class struggles of the Bukit Asahan estate workers in Malacca in the 1970s, who then marched to Kuala Lumpur to meet the prime minister to resolve their problems.

Participants would simultaneously start off from 2 spots - Kedah (Alor Setar), and Johor (Skudai) - with an average of 50 riders for each convoy.

The campaign was launched by the Selangor state Chief Minister Dato Tan Sri Khalid Ibrahim on November 29 at Melawati Stadium in Shah Alam to promote the campaign.

Some 100 participants, mostly school students and the youth are pedalling away from December 3 from two points, traversing the country in a ride of goodwill and promoting awareness of issues. The riders kicked off their first leg of the tour in Alor Star on 3rd December (Monday). Entrants are from northern and southern parts of the country, and they will reach Kuala Lumpur on December 18, and end at Parliament. The group will then hand over their memorandum of six demands to Prime Minister Abdullah Ahmad Badawi and Opposition Leader Anwar Ibrahim.

The six demands are:

The cyclists would be going through small towns and major cities in every state and they would be handing out leaflets as well as spreading awareness about issues that are affecting the public. A memorandum would be handed to the leaders of the states.

Incidents took place after eight days of the campaign

Despite constant police harassment, the cyclists are determined to reach Parliament House as scheduled next Thursday, where both teams will converge to deliver a six-point memorandum to Prime Minister Abdullah Ahmad Badawi and Opposition Leader Anwar Ibrahim.

We would like to urge the Internationally concern citizens to continuously send protest letter to the Inspector General of Police to stop the intimidation against the cyclists and the activists in Malaysia.

[Letterhead of your organization]

Re: Stop Intimidation by the police against the JERIT Cyclist and the activists

We are writing to you, once again, to express our outrage and our strongest condemnation over your government's ongoing crackdown on freedom of expression, a fundamental right which is guaranteed under the Universal Declaration of Human Rights and the Federal Constitution of Malaysia. We demand the Malaysian government to allow the cyclists to continue cycling and practice their freedom of expression as stated in Federal Constitution.

We are appalled by your government's and the police's latest actions and view this as yet another attempt by your government to intimidate Malaysian citizens from participating in any form of public assembly and exercising their freedom to express their views.

We further demand that your government stops the assault on freedom of expression.

We strongly urge you, once again, to stop bringing shame to Malaysia, a member of the United Nations Human Rights Council. We would like to remind you that freedom of expression is guaranteed in the Universal Declaration of Human Rights as well as the Federal Constitution of Malaysia.