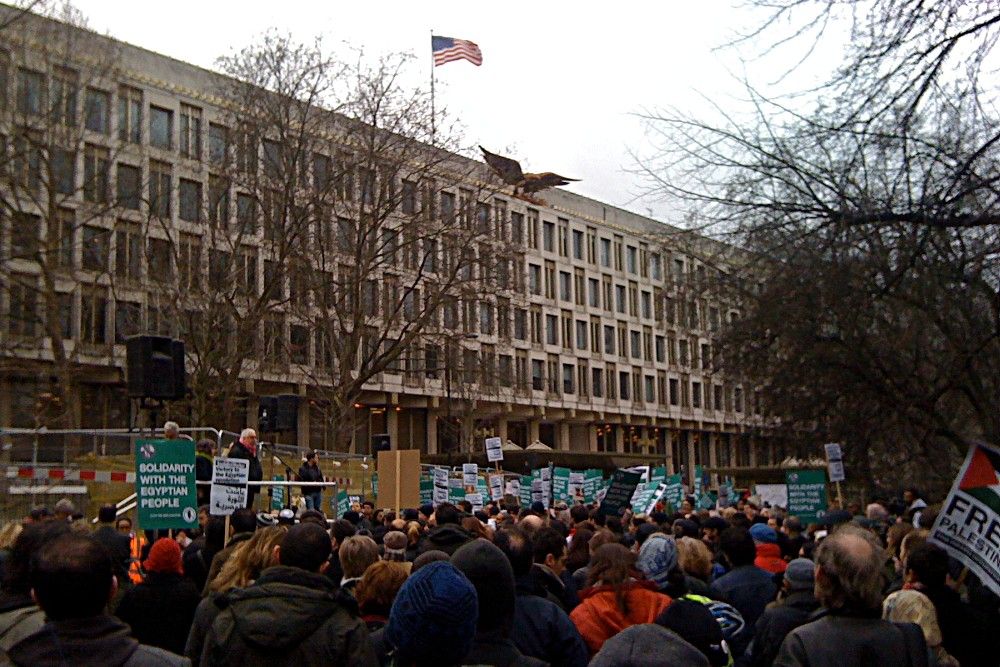 On Saturday (5th February) around one thousand people – Egyptians, Londoners and others ‑ gathered outside the United States embassy and later marched through central London to the Egyptian embassy. The protest was called to show solidarity with the revolutionary struggle of the people of Egypt.

Outside the US embassy the crowd heard speeches from various activists including some who had spent time in Tahrir Square and witnessed the revolution unfolding first hand. These especially highlighted the immense courage and resilience of the people of Egypt. Labour’s candidate for London Mayor and former holder of that post, Ken Livingstone, also sent his message of solidarity.

The gathering then marched through London’s shopping district and its multi-million pound residential area towards the Egyptian embassy. The march was very vocal with chants like “down, down Hosni Mubarak” and “from the Nile to the sea, Egypt, Egypt will be free”. Young Arabs were especially energetic and loud, leading the march carrying the Egyptian flag. Young men and women walked side by side, united by their desire to change society for the better. 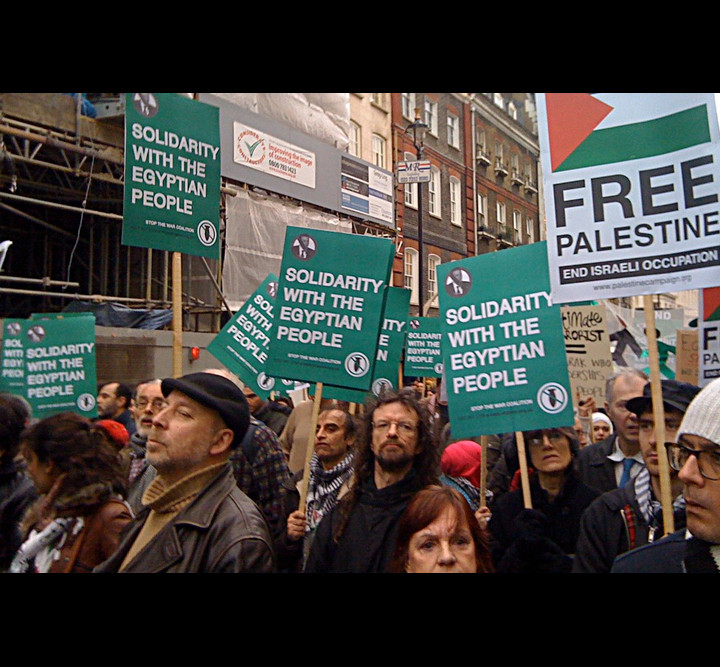 As the procession approached the Egyptian embassy, the slogans become even louder as people shouted at the top of their voices. Their burning passion forced their vocal cords to the limits. The protest filled the street that houses the embassy as their voices echoed off the walls of the narrow street. Men, women and young children demonstrated their support for the revolution unfolding across the Arab world and sent a clear message to the dictatorial regime of Mubarak and its representatives in London sitting in the embassy – “we want rid of you and your despotic rule”.

However, although passionate, the speeches were lacking in a clear perspective. People knew exactly what they did not want. They certainly did not want Mubarak and his cronies in power any longer. What was lacking were clear demands and what to do next. The people want democracy, but how is that to be achieved? But more importantly, how are we to remove this stubborn dictator who clings to power like chewing gum to one’s hair? This task falls to the working class itself. An indefinite general strike will shake the ruling class and Mubarak’s government out of the canopy of power like the monkeys they are. Once the people have taken power they must establish a constituent assembly for the immediate task of drawing up a new constitution to give all the democratic rights including the right to organise free trade unions and workers’ parties. This will give the people the tools at least to start transforming their society.

As the political crisis in the Middle East precipitated it brought to the fore the fundamental divide in society. The youth, workers and all the oppressed peoples in general have united in struggle against the despots and the exploiting class they represent. The fires of revolt that began in Tunisia have set aflame the whole Middle East. A tiny ember of that fire landed in London on Saturday with this demonstration. The crisis of capitalism has turned the whole world into a tinder box ready to explode. It has only become a question of when a where. 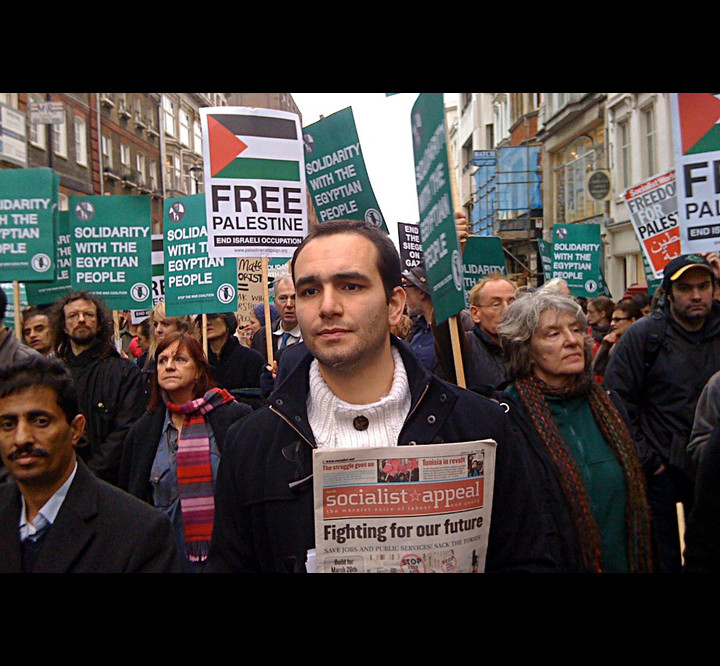 We would like to relay the support and solidarity of Londoners who participated in the demonstration on Saturday to the Egyptian people. We, the Marxists in Britain, would also like to add our fraternal greetings to the revolutionary peoples of the Middle East. But we must also warn that the ruling elite along with the imperialists are plotting behind the backs of the people. You must be vigilant but most of all you must not hesitate! Take decisive action before the opportunity is lost – take power!