Once again there has been a remarkably well coordinated campaign of disinformation regarding the Venezuelan presidential elections being held on Sunday October 7. 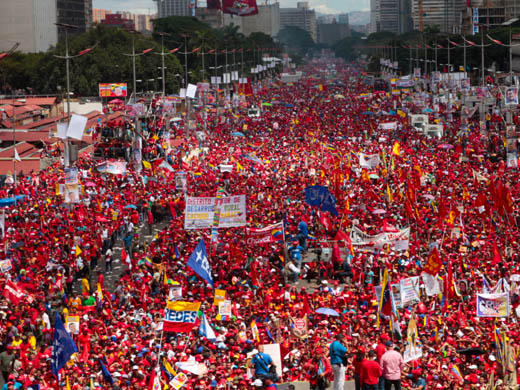 The whole of the world’s media, with more or less emphasis, has followed the same script: A tired, sick autocratic caudillo, Chavez, is facing the young, dynamic, democratic, centre-left candidate of the united opposition. While Chavez is squandering the country’s oil money, Capriles would maintain the social programmes but bring efficiency to them. While there is no scope for fraud, the campaign has not been free and fair. Chavez commands hysterical support from the mobs in a few big rallies, while Capriles has criss-crossed the country getting his message across to a population thirsty for change. The opinion polls are allegedly showing a technical draw, while some in the last week have shown Capriles to be ahead. Capriles supporters have faced violence from the chavista mob, but the opposition candidate has kept his cool. Chavez has threatened civil war if he loses, while Capriles is the candidate of peace.

Every single one of these sentences, which are taken literally from the appalling media coverage of the Venezuelan elections, is either completely false (a straight lie), extremely one-sided or a biased comment passing as information. 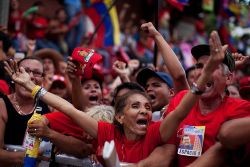 The “autocratic caudillo” (The Economist headlined “The Autocrat and the Ballot Box”) has been elected and ratified in over a dozen electoral contests in the last 14 years. The “young centre-left democratic and dynamic” candidate of the opposition participated in the April 2002 coup against democracy (as did all of the parties in his MUD coalition), fainted twice at the beginning of the campaign, and when elected governor of Miranda launched an assault on the very social programmes he now know claims to support. He is not even really that young at 40 years of age.

Several journalists from state-owned and community media have been assaulted at meetings of the democratic and peaceful opposition, though you will not hear about that in the world’s leading newspapers.

Of the 18 opinion polls carried out in September, 14 give Chavez as a victor and his average lead is 12 percentage points over Capriles (http://venezuelanalysis.com/analysis/7311). How this can be presented as a “technical draw” is anybody’s guess.

When Chavez said that the real plan of the opposition (as revealed by a number of high profile opposition figures) was a neoliberal austerity package and that its implementation would lead to a civil war he was just going on the country’s historical precedent of the Caracazo uprising in 1989. The media decided to present the comment as “Chavez threatens civil war if he loses election”.

El Pais in Spain has been particularly vicious in its attacks on Chavez whom they describe as a “Messiah”, a “TV preacher” and a “rock star”. It even offered an open editorial space to Capriles to explain his programme (http://elpais.com/elpais/2012/09/26/opinion/1348661136_431785.html). We wonder whether the same space was offered to the other candidate, in the interest of fairness and balance. Somehow I fear that that was not the case. We should not be surprised though, as this is the paper which on April 13, 2002 showed its true colours with an editorial comment in favour of the coup of the oligarchy which briefly removed President Chavez from office. (http://elpais.com/diario/2002/04/13/opinion/1018648802_850215.html).

A special prize must go to the Independent in Britain who on the day after the huge final election rally of Chavez (which filled 7 enormous avenues in Caracas) had the headline “Chavez finally meets his match“ illustrated with pictures of Henrique Capriles and not a single reference to Chavez’s rally. (http://www.independent.co.uk/news/world/americas/hugo-chavez-finally-meets-his-match-8198404.html). This is the same paper that on August 16, 2004 announced Chavez was “losing his grip on power” as “mid-morning polls” showed him losing the recall referendum (http://www.indymedia.org.uk/en/2004/08/296434.html), when in fact Chavez won by 59% to 41%.

Of course, it is perhaps The Guardian / Observer Rory Carroll who wins the overall prize for the most biased article with his “Chavez: people’s hero in final showdown” (http://www.guardian.co.uk/theobserver/2012/sep/29/hugo-chavez?newsfeed=true). Just to quote the opening paragraph: “The ailing Venezuelan leader still commands hysterical devotion from his supporters, but Henrique Capriles, his younger, healthier opponent in next Sunday's election, is snapping hard at his heels.” He continues in the same vein: “Huge crowds mob the presidential candidate... They surround his bus, chanting his name … they scream and surge forward, desperate to embrace him.” Carroll, of course, has a long track record of distorting the news about Venezuela (http://www.handsoffvenezuela.org/carroll_in_wonderland.htm).

The only impression one can get from reading Carroll’s article is that those who support Chavez are mad and ignorant. There is a subtle arrogant dismissal of the ability of the poor and working class people to have informed political views combined with a very British upper class dismissal of the genuine enthusiasm people feel for the political process in Venezuela.

The reason why a majority of the Venezuelans, and particularly amongst those from the working class and the poor, support Chavez enthusiastically (not hysterically) is easy to understand: he has challenged the powerful ruling class and imperialism and has delivered tangible, concrete improvement in their living conditions. It is not because they are crazy, as one would think from the choice of words in Carroll’s description of them, but because unemployment has halved, GDP per capita doubled, infant mortality halved, poverty has decreased by two thirds, illiteracy has been eradicated and hundreds of thousands have gained access to the education system, amongst other things (as even the Guardian is forced to reluctantly admit: http://www.guardian.co.uk/news/datablog/2012/oct/04/venezuela-hugo-chavez-election-data?intcmp=239).

This is why they are enthusiastic. For the first time in their lives they can see that direct participation in politics does change something; that the future is in their own hands not in the hands of professional politicians, lawyers, judges and learned journalists.

All of this has been achieved despite the repeated attempts of the ruling class and the so-called “democratic” opposition to overthrow the democratically elected government by all means at their disposal (military coups, oil lock out, sabotage of the economy, hoarding of basic products, rioting in the streets, bringing Colombian paramilitaries, etc).

True, there are many shortcomings of the Bolivarian revolution. Yes, there is a bureaucracy at all levels which acts as a brake on the revolutionary enthusiasm of the masses and this constitutes a real threat to the revolution itself. However, particularly in the second part of the election campaign, the Bolivarian masses have been mobilized on the clear understanding that a victory for the opposition would mean the destruction of all the gains of the revolution.

A victory for Chavez will necessarily have to be followed by a very critical appraisal of what remains to be done and how to accomplish it. The activists of the Bolivarian movement, particularly amongst the working class, will be at the forefront of trying to complete the revolution, brushing aside all the obstacles which stand in their way, including the “Bolivarian” bureaucracy itself.

The campaign of the media ignores all these facts, or brushes them aside as irrelevant. It conveniently ignores the track record of the opposition, uncritically accepting and fostering its claim to be democratic and even centre-left.

The aim of this concerted media campaign is clear: to mould world public opinion. It wants to create the impression that Chavez will not and cannot win the election thereby implying that if he wins, then it must have been through foul means. The idea is to delegitimize the October 7 elections as a true expression of the will of the Venezuelan people. This is not just a question of manipulating public opinion though. There have been many indications, open and veiled, that the real plan of the opposition on October 7, knowing they will not win the election, is to cry fraud and create chaos in the streets. The world’s biggest media outlets are clearly part of this campaign.

None of this should really surprise us though. What we are witnessing in Venezuela is, at bottom, the struggle between irreconcilable class interests. On the one hand are the rich and powerful, the oligarchy, the owners of the means of production, banks, the land, the food production and distribution chain and the mass media. On the other, the workers, the urban poor, the peasants.

Capriles’ article in El Pais was very revealing in this respect. It reads like a sales brochure for Venezuela. He is in fact selling the country to potential EU investors and particularly Spanish companies which have powerful interests in Latin America. “No more expropriations, no more confiscations,” he says in bold and he promises to “guarantee an environment of confidence for national and international investors”. If he wins the election, he promises, he will “deepen economic relations with the EU” and “guarantee the safety of investors”. This is his real program, as opposed to the “centre-left” promises which the mass media are highlighting. He is the candidate of Venezuelan and foreign capitalists and in this article he was talking to his real target audience, the people whose interests he would serve if elected.

The Financial Times, while repeating the same script of the rest of the media (to the point of calling Chavez garrulous), is also more frank in the interests it defends. Its target audience is not the mass of the population, but those who count: managers and directors of big companies, investors and speculators. They describe Capriles as a “business friendly law graduate,” and crucially analyse how a victory for the opposition would bring lower oil prices (http://www.ft.com/cms/s/0/3eba56e2-0c83-11e2-a776-00144feabdc0.html). One of the achievements of Chavez’s policies has been to strengthen OPEC and thus bring higher oil prices which benefit producing countries with higher revenues. In the case of Venezuela, this has been used to fund social programmes which even the FT is forced to admit have benefited the poor majority. Imperialism would like to break up or weaken the cartel of oil producing countries. This in itself is a powerful reason why imperialism would like to see Chavez gone.

The mass media internationally are owned and controlled by a few monopoly groups, which are in turned linked to major business conglomerates. They have chosen their side in this battle. We have chosen ours. The scandalous way in which they abandon any pretence at fair and balanced reporting shows that they understand a lot is at stake in this election. We should actively denounce them and uncover their lies, because in that way we are also advancing our own interests.

Hands off Venezuela! Forward with the Bolivarian Socialist Revolution!