Details
In Defence of Marxism
23 January 2012

Weeks of protests against the National Transitional Council in Libya culminated on Saturday, January 21, with a crowd of thousands storming the offices of the NTC in Benghazi and forcing the resignation of its deputy Abdul Hafiz Ghoga.

The protests started on December 12, when the crowds started gathering in Tree Square in Benghazi (see our earlier report “Libyans protest against NTC stealing the revolution”). There have also been smaller protests against the NTC in Misurata, Tripoli and Zawiya.

Ghoga had become the most visible target of the protesters rage at the lack of accountability of the NTC, slow pace of progress in delivering genuine democracy and social justice, lack of payment of wages, etc. On Thursday January 19, he was booed and attacked by a large number of students when he attended a public meeting for the martyrs of the revolution at Ghar Yunis University in Benghazi (see VIDEO). His arrogant and dismissive response, calling those who had protested against him “ignorant” and “stupid”, concentrated the anger of the masses who demanded his resignation. 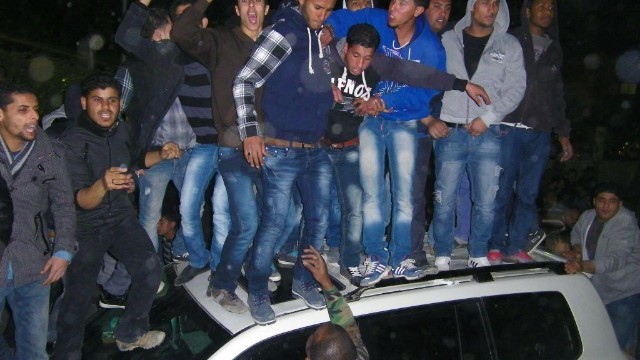 On Saturday night, thousands of protesters went to the NTC building in Benghazi and stormed through the gates throwing hand grenades and firing in the air. Amongst those present at the protest were many who had been involved in the armed campaign against the Gaddafi regime. Many were armed with machineguns and bayonets. The head of the NTC Mustafa Abdel Jalil, in effect the country’s president, was trapped in the building for a few hours. He attempted to calm down the crowd, but bottles of water were thrown at him and had to retreat (see Euronews VIDEO). Protesters proceeded to destroy his Land Cruiser vehicle parked outside.

After angry exchanges finally it was announced that Ghoga was going to resign. He told Al Jazeera: “My resignation is for the benefit of the nation and is required at this stage.” NTC head Abdel Jalil praised him saying he had “put the country first”, but this was no grand gesture on his part, rather he resigned because he feared for his safety and in order to attempt to save the rest of the NTC. Mustapha Abdel Jalil quickly added that the NTC had no intention of resigning as that would mean “a descent into civil war.”

Naima B., a participant in the protests explained how they had lost faith in the NTC as a whole: “We were patient while the country was at war but today we no longer have any reason to remain silent. We have taken a more radical position: we are now demanding the dissolution of the NTC and the creation of a new Council that is capable of responding to our demands.”

Another protester, 24-year-old Mohammed Mahmoud, quoted in a Reuters story, who had fought against Gaddafi during the revolt and had been wounded explained the source of their frustration: “We fought on the front line and received injuries but we did not see the NTC with us. I have one single question: Why has the NTC failed at everything except selling oil? We want to correct the path of the revolution.”

There is strong suspicion that the NTC has been receiving money from oil contracts and from the unfreezing of the regime’s assets, but that none of this money has been used to improve the situation of public sector workers, unemployed youth or those who fought in the revolution.

Ms. Bugaighis, a prominent Benghazi activist who resigned from her position in the original NTC, stressed that the protesters were particularly enraged about allegations that millions of dollars in government money was unaccounted for. “They want transparency. They want people from the Qaddafi regime to go,”

"You can see around you that there is no change. There has been no money spent on infrastructure and salaries are not being paid," said Ali al-Rabia, another of those who stormed the NTC building. "We know they are getting money from the over one million barrels of oil they sell a day, but where is it being spent? But the worst of it is that people who worked with Gaddafi are being appointed into the interim government."

The protesters are also opposed to the new electoral law which is being drafted and which is widely seen as being undemocratic. Demonstrators at Tree Square also issued a statement protesting the visit of Egypt's military ruler Tantawi and in solidarity with Egyptian revolutionaries.

Clearly, the resignation of Abdul Hafiz Ghoga, did nothing to calm the mood. On Sunday, January 22, about 4,000 students from Benghazi University and their supporters gathered again to demand the immediate release of 11 of their colleagues who had been jailed and roughed up by NTC police in connection with the protests at the University.

Students and youth are at the forefront of this movement, but workers are also starting to use their industrial muscle. We have already reported about the strike of the oil workers at one of the state owned companies (Libyan oil workers strike for the removal of managers linked to Gaddafi). In early January it was the turn of workers at Tripoli’s harbour, who went out on strike demanding better working conditions and the removal of Gaddafi loyalist managers.

Clearly the same people who rose up against corruption, nepotism, lack of democracy and for freedom and dignity are not prepared to allow their revolution to be stolen by a handful of self-appointed careerists, many of whom were Gaddafi regime officials until the very last minute.