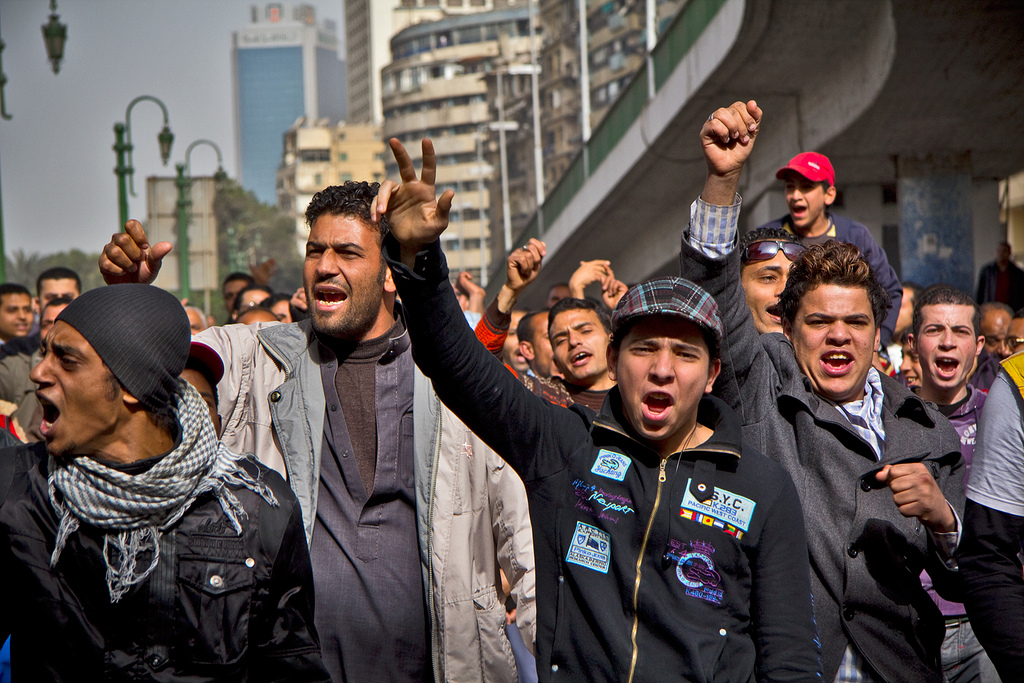 After a much criticized silence, Hosni Mubarak has finally made a statement regarding the protests. The initial reaction to the speech was one of anger. Mubarak’s speech was quite predictable, basically praising the poor, promising reform and what not. Even though these blatant lies that reek of condescension are enough reason to ignite the streets of Egypt with fury, it was Mubarak’s last statement that angered the people the most.

Mubarak stated that he would be calling for the resignation of the government (i.e. the ministers). Of course the streets of Cairo have asked for Ahmed Nazif’s (the Prime Minister) resignation before but these protests did not concern themselves with ministers. The Egyptian streets are calling for Mubarak’s resignation, not just Nazif’s or Habib’s! Workers of the steel and mining industry have called a strike in solidarity with the people. As the infamous NDP businessman (who monopolises the steel industry), Ahmed Ezz, tried to escape the country he was arrested at the airport.

Omar Suleiman is a strong and very politically ambitious military man. He has held key positions in the army. During the Bush era, he was favoured as Mubarak’s successor. Omar Suleiman has been the chief of “Egyptian Intelligence” for almost 18 years. This means that he has been a key figure in the rampant political repression, torture and crimes against humanity committed by the Mubarak regime in the past 18 years. He controls the secret police and runs the political prisons and military apparatus. There is no question about the fact that he has been on the CIA payroll for a very long time. Besides his domestic human rights abuses, Omar Suleiman is also the active voice of Israel in the Middle East. Officially, Omar Suleiman is the mediator in the Israel-Palestine conflict, but of course there is much more to it than that. In reality Omar Suleiman has been deeply involved, along with the leader of the Palestinian authorities Mahmoud Abbas, in deals that cause the people of Palestine great suffering. Omar Suleiman is without doubt an unpopular figure in Egypt.

Why did Mubarak appoint him as vice-president? Mubarak is not a conscious dictator, in the sense that he does not take the power of the people seriously; rather he is quite threatened by Washington’s condemnations. Mubarak still doesn’t get it. He believes that if he places the CIA’s top man in the position that translates to succession, they will take more actions to support him. This is a very tricky game. The US has already declared “understanding” for the protest so it would be harder for them to take any direct action. Mubarak does not need finance at the moment or weapons; he needs people to agree to direct these weapons at the people. The army and the police force are not trusted by the regime. The appointment of Omar Suleiman is Mubarak’s cry for help to the CIA and Israel.

Now, there is a chance that if Mubarak is toppled Omar Suleiman will be the new president (according to the constitution). If he in fact he does succeed in that, then that would mean plans for a massive clampdown on dissenters and ordinary people; very strict military rule and this would not translate well at all for the Palestinian people or anyone at all. If he fails, then this would be good news for the Egyptian people because the CIA will not be able to prop him up in the later democratic stages of the revolution.

[This letter was sent on January 29, just after Mubarak had made his TV statement]