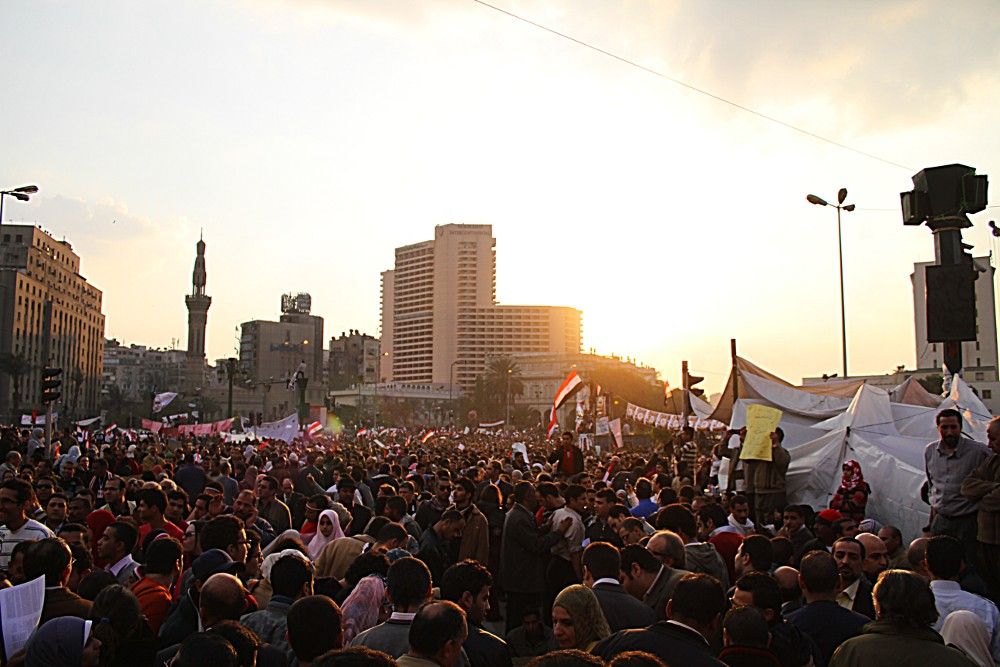 We republish here an article by Gerry Ruddy, originally published in the The Red Plough (March 2011), which draws some important lessons from the mass movements in North Africa and the Middle East and their relevance to the struggle for a united Ireland.

For over forty years in the North of Ireland, Republicans of various hues have used armed force to change the status of the Northern state and create a united and/or socialist Ireland. Indeed the provisional IRA procured arms from Gaddafi’ Libya when Gaddafi was going through a so called “anti-imperialist” phase. Those arms allowed that organisation to maintain its armed campaign for many years before its final defeat.

Recently off-shoots of the Provos have, despite all evidence to the contrary, maintained that armed struggle is the only way forward. However, whether they are the real, the really real or the really, really real IRA’s, none of the groups is capable of maintaining a consistent armed struggle.

Occasionally shots are fired in Lurgan, Derry or somewhere else, bombs and hoax devices are planted, and yet the vast majority of people ignore it and get on with their lives. While there is little enthusiasm for the Stormont Assembly or the power sharing administration among many nationalists, there is not yet enough opposition that could possibly justify armed struggle. Of course there maybe the occasional “success” such as the killing of a uniformed soldier or policeman, the assassination of a prominent politician, the burning down of a furniture store , the bombing of a “prestige” target and the knee-capping of a “local hood”.

But will that change the fundamental relationships between Britain and Ireland? Will it improve the position of northern nationalists? Will it win over the protestant working class to socialism? Will it bring about a United Ireland? Or will it stop crime in working class communities? Will it hell! All it will do will be to see another generation of young people languish in British and Irish jails. And for what? Yet another glorious defeat.

Compare and contrast that with what is now happening in the Middle East. Note how weeks, sometimes days, of mass action by the people succeeded in changing autocratic dictatorships that had been in power for decades. In Libya the mass struggle there is now combined with mass armed actions as the people attempt to overthrow the regime of Muammar al-Gaddafi. In Tunisia, Egypt, Lebanon, Jordan, Qatar, etc., there have been tremendous explosions of popular discontent. Change is certainly in the air and Imperialism, caught unawares, tries to adjust to the new situation and stop the mass movements from radically changing the status quo. Oil has been the dominant factor in the running of these countries for years. So the Western powers supported, armed, financed and trained the police and armies of corrupt leaders in these countries, all in the interests of Western imperialism.

Suddenly the whole deck of cards started to tumble down when the Tunisian masses responded to the tragic suicide of a young market trader denied a license by corrupt police. Corruption was rife in both Tunisia and Egypt; massive wealth for the thousand or so elite families and dire poverty for the millions. That was the reality. Hence the massive explosion of anger that fanned the flames of revolt throughout the Middle East. The mass explosions have at their core democratic demands. Of course within the struggles there are religious fundamentalists, monarchists, and enthusiastic followers of Imperialism, but there are also vast masses wanting fundamental changes in the political, social and economic conditions under which they live. And they are the driving forces for change.

While it is too early to predict the outcome of those mass struggles there are certainly valuable lessons for us here in Ireland. Change comes, not as Mao says from the barrel of a gun, but when the masses move. Individual acts of violence, unrelated to the needs and aspirations of the masses, are elitist militarism and do nothing to advance the cause of either the militarists or the masses. That is also the lesson to learn from other successful revolutions such as the Cuban and Chinese revolutions. Armed struggle in both was linked to the social emancipation of the masses and without that support both revolutions would have failed. (the development of China’s revolution from 1949 is another separate question).

The other key lesson from the mass uprisings in the Middle East is the breaking down of national and religious barriers. There is an internationalism occurring in what is happening that transcends the state barriers imposed by imperialism. The masses in Egypt, Libya, etc., saw what their brothers and sisters had achieved in Tunisia and started to emulate them creating a bond among the Arab masses. Of course just as in Ireland, Imperialism will try to fan the flames of tribalism, sectarianism and fundamentalism in order to maintain a foothold in the Middle East. It is for the progressive elements in the struggle to ensure that does not happen. Otherwise like Ireland the struggles will be diverted down the blind alleys of bigotry and sectarianism. When that happens there is only one winner, Imperialism.

[Originally published in The Red Plough, Vol. 2-No 1, March 2011 http://theredplough.blogspot.com/]