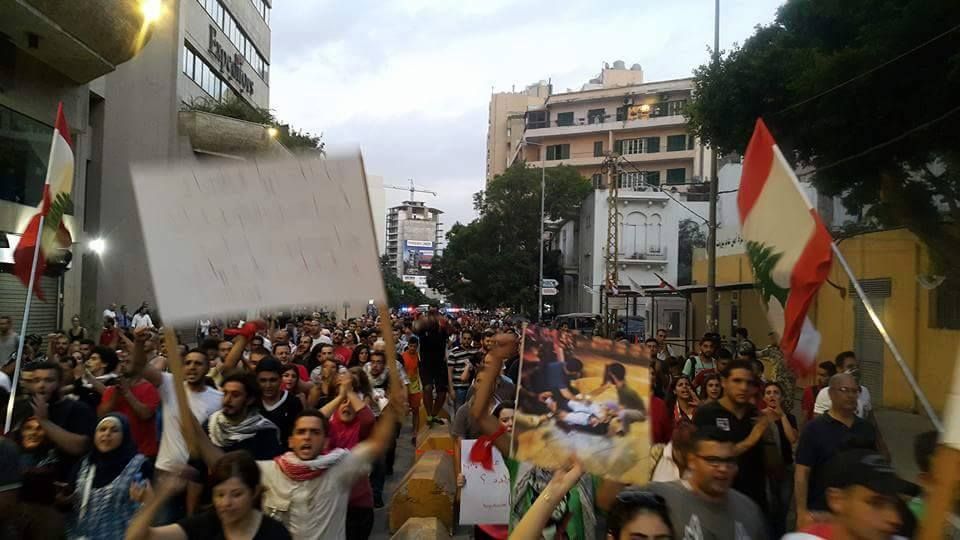 Demonstrators in downtown Beirut are under severe police repression. Dozens have been injured and at least 90 of the protesters have been arrested so far, but the count is likely to grow in the next hours. The sweeping protest of Lebanese youth, which took the name of the “You Stink” movement, started on August 22.

It was triggered by the crisis of waste collection in the capital. Tens of thousands of youth gathered in downtown Beirut to protest against the unbearable conditions faced by ordinary Lebanese people and against the government and to end a corrupt system. The main slogan was “The people want the fall of the Regime”.

The Lebanese capital has been buried under piles of uncollected trash and filth for weeks. Power cuts and water shortage are the norm in poorer neighbourhoods. Protesters soon demanded the government’s resignation and that all corrupt officials to be prosecuted. It has become a pole of attraction for the growing anger and alienation against the system which is cutting across the sectarian and religious divisions in the country. This is the reason behind the current attempt to repress the movement.

For many Lebanese people the piles of rubbish symbolised everything rotten in the Lebanese state. Failed institutions incapable of providing the most basic services and a corrupt elite seeking the best way of enriching themselves and ways of milking the state finances in their favour. The crisis is indeed a symbol of the rottenness of the regime. Conflicts among different business cliques in order to have the lucrative contracts for waste management and disposal are one of the reasons why the crisis has exacerbated to such a degree and seems still far away to be solved.

“Some trash should not be recycled,” read one of the You Stink banners, showing pictures of political party bosses, reported yesterday Roula Khalaf on the Financial Times.

The movement has attracted youth coming from a Shia, Sunni, as well as Druze and Christian background in a country where sectarian and religious divisions have even been enshrined in the constitution ever since after the Civil War. The unstable balance between the former warlords has been kept at the expense of real democratic control on part of the Lebanese people and a corrupt elite has emerged by abusing of public offices. The current deadlock is demonstrated clearly by the inability to replace the country’s president for 18 months.

The ruling elite has tried to stop protesters to march onto the government and Parliament by erecting a wall, but their pathetic attempt was overcome in less than 24 hours by the protesters.

This movement is demanding an end to the sectarian set-up of the political system and that politics should be taken back in the hands of the people, regardless of religious and sectarian divisions. We firmly oppose police repression and denounce it as a desperate measure of the corrupt political regime to protect their own privileges.