Ukraine
Share
Tweet
The struggle at the Kherson Machine Plant in the Ukraine continues as it gathers support from the local population. The workers have decided to rename the factory after an old Bolshevik leader, revealing that in spite of the disaster of the past 20 years the old traditions are beginning to make a comeback as the Ukrainian economy enters a serious slump.

The lawyer that represent the interests of the Kherson Machine Building Plant bosses and the technical director, Sergei Shlahover, have applied to the Public Prosecutor's office and described the workers’ action as an "illegal occupation by competitors" and have also declared that it is was carried out "by people in masks". This is a blatant lie. But it seems that the Public Prosecutor officials have not taken these statements seriously. 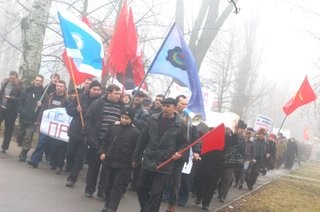 The workers of Kherson Machine Building Plant have decided to rename the factory after G. I. Petrovsky, the Bolshevik leader.

The factory’s bank account has been frozen, and the Public Prosecutor official has declared that they intend to investigate to the very end the case of Mrs. Pugacheva, the factory owner, who is responsible for the non-payment of months of back wages.

One of the factory workers visited the Prosecutor’s office and refuted the false statements made by the capitalists. The local district governor met with representatives of the Workers’ Council and did not criticise the workers’ actions and declared that the workers can stay in the factory premises until its owner accepts to take part in negotiations. In general he supported the call for nationalization issued by the workers, but added that this must be "according to the law".

The workers have also decided to rename the factory after G. I. Petrovsky. The old signboard "Kherson Machine Factory" had been removed before the occupation by the owners themselves who had a plan to destroy production, sack all the workers and sell off all the production lines as scrap metal. Now the workers have put up a new signboard, " G. Petrovsky Kherson State Machine Factory." Thus the factory has been given back the name of a Bolshevik and workers’ leader of pre-revolutionary Russia, Georgii Ivanivich Petrovsky. 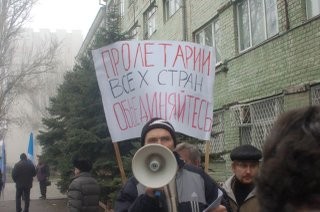 The Head of the Workers’ Council, Leonid Nemchonok.

The struggle now continues. The workers have plans to go forward and get workers from other Kherson factories to join them. Together with the students. The Head of the Workers’ Council, Leonid Nemchonok, also recently took part in the Shuster live TV show, which is the most popular Ukrainian TV-programme. In this moment about 100 workers are inside the factory. The head of the Workers’ Council, comrade Nemchonok, speaking to the local TV station explained that the workers will fight until the end. "We are fighting for a just cause, we will win" he said.

V. Shapinov KCF declaration to the people of Kherson:

Comrades! Today the situation in the combine factory is critical. Production has been stopped, wages have not been paid, all payment for budget and pension funds have been stopped. But the owners and local authorities are doing nothing to save the factory.

In this situation the workers decided not to give up, but to unite for a struggle for workers’ interests. It has not been easy but we have taken up a tough struggle. We have picketed the local authority building, we have occupied and taken over control of the factory to prevent the stealing of production and machinery, and we are fighting to get across correct information about our struggle. 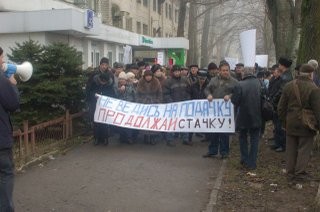 The workers have decided not to give up, but to unite for a struggle for workers’ interests.

Comrades, We appeal for your support! The combine factory is the pride of our town. It has been of support for the town budget and has also created jobs in other local factories, and other industries. Let us fight together!

Our demands to the government are:

We call on all workers in Kherson to join a common struggle in defence of the interests of workers, pensioners and student youth! Take part in all solidarity actions!

For solidarity letters write to: solydarity.ksmz@gmail.com

All letters are received directly by the factory workers’ council.