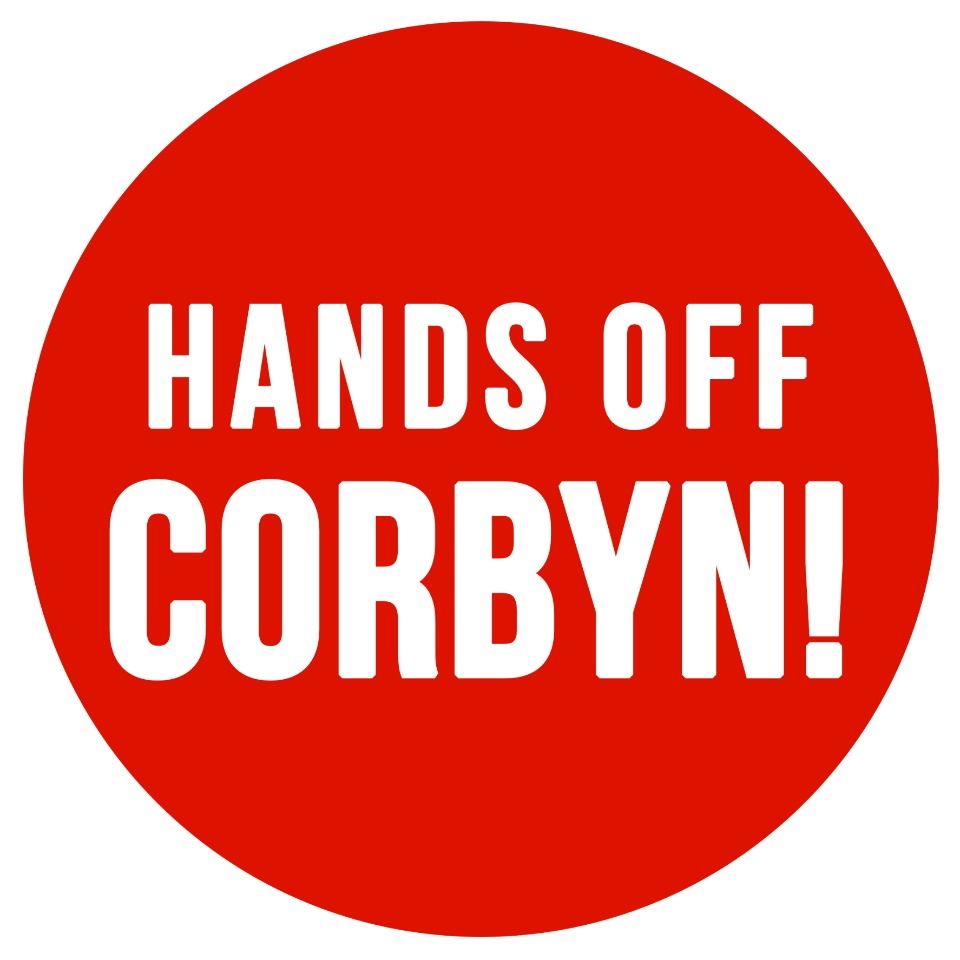 The Rubicon has been crossed. The die is cast. With their vote of no confidence against Jeremy Corbyn (by 172 votes to 40), the den of thieves that is the Parliamentary Labour Party have declared all-out war against the democratically elected leader and the vast majority of grassroots members. Tensions have reached breaking point. As the Financial Times, the reliable mouthpiece of the ruling class, correctly asserts, “having unsheathed the dagger, Labour MPs cannot now draw back.”

The lines in this battle have now been very clearly drawn. On the one side is Jeremy Corbyn, the trade unions, a core of loyal left-wing Labour MPs, and hundreds of thousands of Labour members and Corbyn supporters. On the other side is the majority of the Parliamentary Labour Party (PLP) – dozens of careerists and Blairites whose motto now is “rule or ruin”.

All talk now of “unity” between these two camps is now a laughable joke. The only “unity” that these right-wing MPs are willing to accept is for Corbyn’s head to be paraded around on a stick. They have demonstrated that they have an utter contempt towards rank-and-file Labour members and for the basic principles of Labour Party democracy. They believe that the Labour Party is their personal property, and that the membership is merely a passive mob that must accept their condescending diktats. They would clearly rather split the party than see it dominated by Corbyn and those who support him.

This is now a battle to death in which only one side can win. Corbyn has stood firm. With the backing of the trade unions and rank-and-file activists, he has resisted the calls from the PLP and the whole of the Establishment for him to go.

But the Blairites are not backing down either. They have the whole of the ruling class behind them, pushing them on to carry out a coup against Corbyn. With the vote of no confidence won, they will now feel emboldened to rally around a new leadership candidate.

Over 40 Labour MPs have resigned from the shadow cabinet and other more junior roles. Backbenchers even heckled the Labour leader during a session in the House of Commons. Reports from the PLP’s meeting yesterday describe scenes of shouting and mud-slinging as the careerists tried to pressure Corbyn into resigning.

The situation is untenable and is now heading for an open split. Whoever the Blairites put forward in a leadership election, it is highly likely they would lose against the combined might of Corbyn’s supporters amongst the membership, trade unions, and wider working class. And what then? On the other hand, if they try to keep Corbyn off the ballot paper, that will most certainly be seen as a provocation that will not be accepted by the grassroots or the trade unions, who have reaffirmed their backing for the current Labour leader. 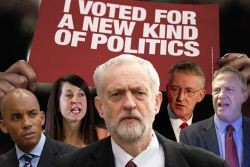 Photo: Socialist AppealThe question of deselection has therefore been thrust to the forefront. It is openly being raised in the mainstream media. The hashtag #DeselectThem is trending on Twitter. Even trade union leaders are raising the issue of deselection; writing in the Guardian, Len McCluskey – the general secretary of Unite the Union, Labour’s biggest funder – gave a sharp warning to the careerists MPs in the PLP in response to their manoeuvres, writing that:

“Unite has hitherto opposed any plans to change the party rules governing mandatory re-selection of Labour MPs…But those MPs who have missed no opportunity to tweet and brief against the party’s elected leader over the last 10 months will find that their disloyalty finds no favour with party members and will make this an increasingly difficult line to hold.”

One recent study showed a burning desire amongst the Labour rank-and-file for greater democratic control of Labour’s elected representatives. According to a report on the LabourList website, “A majority (55 per cent) of new members believe that MPs who ‘persistently and publicly criticise the leadership in the media should be deselected’, with the proportion rising to two-thirds (68 per cent) of those who joined after Corbyn took the top job.”

Petitions are already circulating against right-wingers such as Ben Bradshaw and Hilary Benn. Angela Eagle, meanwhile, has faced opposition from Labour members in her constituency of Wallasey, who have demanded that she back Corbyn.

It is only matter of time, therefore, before Blairite MPs push the patience of Labour members beyond its limits. Eventually deselection will be openly demanded in the Constituency Labour Parties (CLPs) of right-wing Labour MPs, and a wave of deselection will hit these self-serving careerists in the face.

Indeed, ordinary Labour members are fuming at the scandalous behaviour and sabotage of the Labour right-wing. They can see clearly who is to blame for the turmoil inside the Labour Party. Comments on social media highlight the enormous anger amongst the grassroots towards these back-stabbing MPs:

“Traitorous fools”; “Do us a favour and resign as MPs”; “Disgusting all you MPs stabbing Jeremy in the back”; “You should be fighting the Tories and fighting for working people”; “I have no respect for back stabbing right-wing Labour MPs - go join Liberals”; “Their job is to serve the party. If they don't support democracy they should go”; “The Party chose Corbyn by a huge majority - are you happy to totally ignore the membership?”; “Career politicians the lot of you - go join Gove and Boris”; “Labour Party members need to mobilise to deselect you - you have let the local membership down”. And these are just the tip of the iceberg.

Whilst the careerist creatures lined up to attack Corbyn in the PLP meeting yesterday evening, outside on Parliament Square over 10,000 Corbyn supporters gathered at a Momentum-organised rally – organised at only 24 hours’ notice – to hear trade unions leaders and left-wing Labour MPs talk about how to defend Corbyn and the entire Labour movement against the sabotage and shenanigans of the Blairite gangsters.

Amongst those speaking were Labour MPs Richard Burgon and Diane Abbott, who both gave passionate speeches in support of Corbyn. Matt Wrack, leader of the Labour-affiliated Fire Brigades Union, gave a sharp rebuke of Corbyn’s critics. “What we have here,” the FBU general secretary stated, “is a carefully co-ordinated coup, planned to cause the upmost damage. What an utter disgrace these people are…We are not going to allow them to get away with this coup!” (see video below, from 30m:00s.)

Both Matt Wrack and Paul Mason, the left-wing author and journalist, implicitly raised the question of deselection of the out-of-touch MPs in the PLP, calling for a new generation of elected representatives for the Labour movement. “We need to find 100 new potential Labour candidates from crowds like this,” Mason stressed. “We need young people, women, and those from most disadvantaged and oppressed to stand.”

The rally finished with speeches from Jeremy Corbyn and his close ally and friend, John McDonnell, who were greeted by an enormous wave of enthusiasm from the crowd, with cheers of “Corbyn In, Tories Out”. “Let me make it clear,” McDonnell, the shadow chancellor, affirmed, “If there is another leadership election, Jeremy Corbyn will be standing again and I will be supporting him. This is not about any individual; this is about democracy of the movement.”

The movement behind Corbyn must not put up with these Blairite games any longer. Britain is in turmoil, facing a profound economic and political crisis as a result of the Brexit vote. And it is workers, the poor, and the youth who will be asked to pay for these crises. The working class needs representatives that are willing and able to stand up and fight for the interests of workers, and not merely parrot the words of the Establishment.

The Tories are in a deep crisis of their own. A snap election is on the cards within a few months. A Labour Party that is united around Corbyn and a programme of bold socialist policies could win such an election. This is what terrifies the ruling class and their infiltrators inside Labour. That is why they are seeking to oust Corbyn as soon as possible.

It is time to cure the Party of the Blairite cancer that is killing it. The question of mandatory reselection must be pushed throughout the Labour movement by Momentum and trade union activists, and all those who want to defend Corbyn. Those Corbyn supporters who are not yet active inside the Party should jump into the fray and make their voices heard. Any Labour MP who refuses to back Corbyn must be deselected by Labour members, shown the door, and replaced by a genuine representative of workers and youth. There is no time to waste.