Details
In Defence of Marxism
07 September 2006

Pakistan
Share
Tweet
The Jammu-Kashmir National Students' Federation-Marxist (JKNSF) has called its 16th convention for September 20-21 in Rawalakot. The lead-up to the convention will see a massive mobilisation of students of youth all across Kashmir. 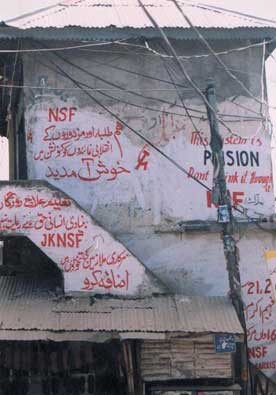 The Jammu-Kashmir National Students' Federation-Marxist (JKNSF) has called its 16th convention for September 20-21 in Rawalakot. The lead-up to the convention will see a massive mobilisation of students of youth all across Kashmir. According to a conservative estimate more than two thousand delegates will participate in the convention to elect a new leadership. A convening committee consisting of 15 members, which was obliged to organise all the groups and branches at the college, town and city level, is busy preparing for the convention. This convening committee is also preparing a new manifesto which will be presented at the convention for debate and approval. Walls in the main cities and along the main roads are filled with red wall chalk. Rawalakot will be a red city on the eve of the convention with the red flags, banners, and wall chalk. A poster has been produced which will be pasted all over Kashmir as well as in major cities across Pakistan.

This convention will be very important. Firstly, the Marxists of the JKNSF are going to celebrate their victory over the reactionary nationalists and the other sects in the JKNSF. This was a long five-year struggle that the Marxists fought against the Stalinists and nationalists for the validity of Marxist internationalism. 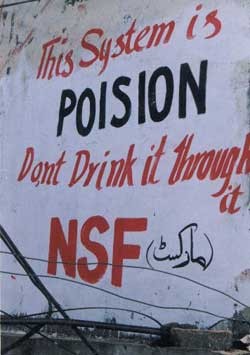 This battle was coming to a head last year. The Marxists were preparing the final blow against the other factions when the disastrous earthquake struck last October 8. Now that political life in Kashmir has returned to normal (somewhat), a decision will be reached in this battle.

Secondly, this convention will mark the first time in history that the JKNSF will elect a Marxist leadership. In the context of the question of Kashmir, this convention, with its numerical and ideological strength, will mark a turning point in Kashmir's struggle for freedom.

On the eve of this convention the JKNSF is politically polarised. The nationalists and Stalinist sects are weak and desperate. The fundamentalists have been completely wiped out from the scene. They do not have the courage to say a single word against communism, which now demonstrates its validity and power not in the pages of The Communist Manifesto but on the walls of Rawalakot and in the material force of Marxist youth. 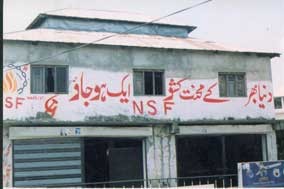 However, the new Muslim Conference government, which came to power after the recent rigged elections in Kashmir, has filled the gap created by the failure of the nationalists and fundamentalists. The state propaganda machine continuously spews rubbish against the Marxists and is now attempting to erect barriers to sabotage the convention. A dirty campaign has been launched by the newspapers. There is an unannounced coalition between the state, the nationalists, the Stalinists and the other sects against the convention and the Marxists. The state and the ruling party are at the forefront of this fight because there is no other force with enough strength or courage to lead this dirty war of sabotage and manoeuvring. 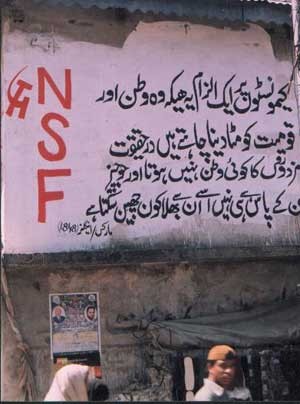 Despite these problems the morale of comrades remains high. The ideas of Marxism are attracting vast layers of youth and students. This convention has the power to turn Kashmir from a nuclear flashpoint into a revolutionary point of reference for the youth and workers of the sub-continent and of the world. The echo of the slogans of socialist revolution will tear up all boundaries and walls erected by the ruling classes.

We appeal to all the comrades, especially those in youth organisations, to send us messages of solidarity for the convention.