Pakistan
Share
Tweet
Around 100 JKNSF delegates met recently in Rawalpindi to discuss preparations for what promises to be the biggest ever youth convention in the history of Pakistan in November.

On 16th September a JKNSF delegate conference was held at the Rawalpindi Press Club. A total of 93 delegates participated in the conference from the following cities of Kashmir and Pakistan: Rawlakot 13, Bagh 4, Muzaferabad 8, Kotli 9, Sudhnoti 5, Khaigala 11, Thorar 6, Datot 6, Gerri Dupatta 4, Baloch 5, Neelam Valley 3, and delegates were also present from Rawalpindi, Lahore, Karachi, AJK University, Kotli University and other colleges. 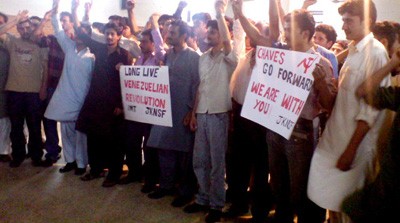 Before the conference a protest was held against the counter-revolutionary intervention of the United States in Venezuela and Bolivia and in solidarity with the revolutionary struggle of the Venezuelan workers, peasants and youth.

The conference started at 8pm, and was chaired by comrade Abid Husain, the General Secretary of the JKNSF and was presided over by comrade Adil Khan, the President of the JKNSF. A lead off on “World Perspectives” was given by comrade Sajid Kashir. He explained the present financial crisis and the inability of the capitalists and the rulers around the globe to solve this crisis. But on other hand there is an emerging movement throughout the whole world. The only solution is the world socialist revolution around the globe and that is our duty as Marxists. We are clearly aware of our responsibilities and will change the destiny of mankind.  After the lead off, 13 comrades enriched the discussion.

The second session was on the “JKNSF National Convention”, where comrade Adil Khan spoke on the importance and preparation of the national convention which will be held in November. This convention will be organized in one of the biggest grounds of the area, Liaqat Bagh, in Rawalpindi. He said that we should make efforts to make it the biggest ever youth convention in the history of Pakistan

A central organizing committee of ten comrades has been formed for the preparation of the convention along with five other committees, one for the publication of a manifesto and programme of the convention and other documents, a second for fund-raising and collection, a third for the arrangements of the hall and accommodation, a fourth for the media publicity and a fifth for national and international correspondence.

This pattern of organizing committees should be adopted at all levels.  It was decided that an ambitious and organized campaign will be launched to mobilize the youth and students at all levels. Two main activities will be held, the first on 26th September on the anniversary of the death of the martyr Fahim Akram Shaheed and the second on 8th October, the third anniversary of the 2005 earthquake in all cities of Pakistani-held Kashmir.

At the end of the conference two resolutions were also passed unanimously:

After a very hectic discussion on all the aspects concerning the preparation of the convention, comrade Adil summed up the conference. He said that we are going to hold this convention at a critical juncture of history. And therefore this convention will mark a turning point in the struggle for the socialist revolution in this region, both subjectively and objectively. He also said that we are in contact with student leaders from Indian-held Kashmir and delegates from the other side of the Line of Control will also participate.

The last words of Leon Trotsky are even truer for us today: “Go forward, the future is yours!”

We shall fight, we shall win!