Details
In Defence of Marxism
20 September 2006

Pakistan
Share
Tweet
In the build up to the convention of the JKNSF the comrades held a motorcycle rally in Rawalakot. 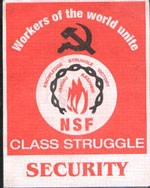 A motorcycle rally was held in Rawalakot on September 19. The rally began at the Post-graduate College grounds and finished some 8 kilometres away in Khaigala. Routine life in the city was disrupted when dozens of motorcycles flying red flags entered.

This rally was part of the preparations along with the wall chalking and hanging of banners throughout the city in the build up to the convention. More than ten vehicles are continuously moving in and around the city announcing the convention.

The city of Rawalakot and surrounding towns and villages are as red as the red flags with the hammer and sickle flying on every roof. A squad of 200 young comrades has been formed and equipped with arms for security. 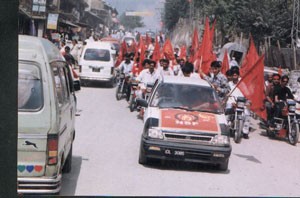 the convention of the Marxists but their tactic backfired. They completely failed to mobilize their demoralized forces. Less than 100 turned up to their meeting. All the opinion polls and political analysts declared this activity a huge mistake and called it “the death ceremony of the nationalist faction”.

The convention of the Marxists has been highly publicized through the use of each and every available means. We are positive that the convention will be a great success. For the first time in the history of Kashmir a student organization will hold its convention in the Sabir Shaheed Stadium, which is the biggest venue available for political events.

The only great uncertainty is Kashmir’s weather, which can create disturbances. However, despite these things this is clearly the beginning of a new stage in the class struggle. More reports of the convention will follow.