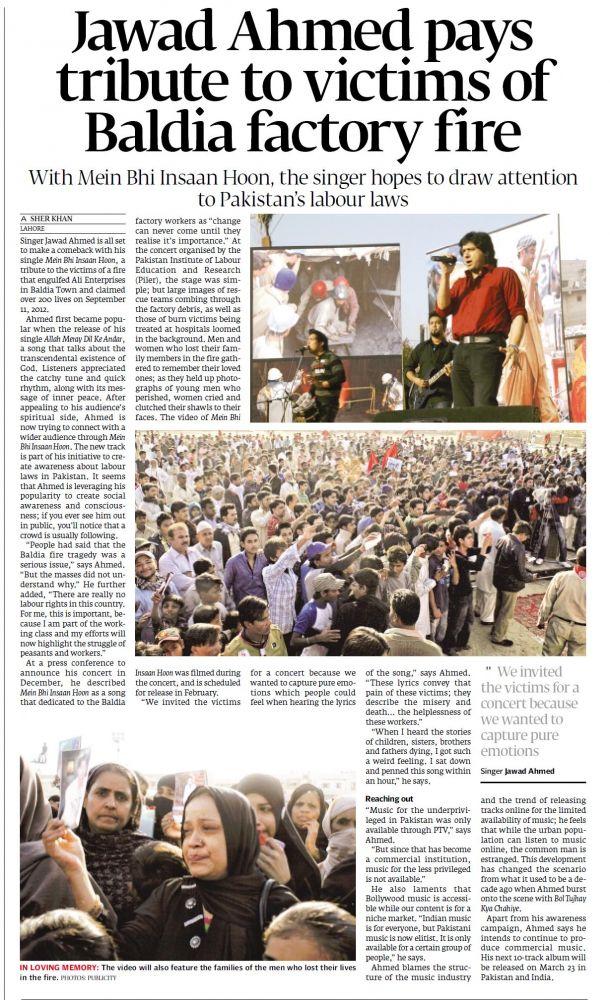 The Express Tribune on 23 January published a long interview with IMT sympathiser and musician Jawad Ahmed who recently released a song in honour of the victims of the Karachi fire in September last year. You can read the article in the epaper edition or on the website of the Tribune.

Lahore: Singer Jawad Ahmed is all set to make a comeback with his single Mein Bhi Insaan Hoon, a tribute to the victims of a fire that engulfed Ali Enterprises in Baldia Town and claimed over 200 lives on September 11, 2012.

Ahmed first became popular when the release of his single Allah Meray Dil Ke Andar, a song that talks about the transcendental existence of God. Listeners appreciated the catchy tune and quick rhythm, along with its message of inner peace. After appealing to his audience’s spiritual side, Ahmed is now trying to connect with a wider audience through Mein Bhi Insaan Hoon. The new track is part of his initiative to create awareness about labour laws in Pakistan. It seems that Ahmed is leveraging his popularity to create social awareness and consciousness; if you ever see him out in public, you’ll notice that a crowd is usually following.

“People had said that the Baldia fire tragedy was a serious issue,” says Ahmed. “But the masses did not understand why.” He further added, “There are really no labour rights in this country. For me, this is important, because I am part of the working class and my efforts will now highlight the struggle of peasants and workers.”

At a press conference to announce his concert in December, he described Mein Bhi Insaan Hoon as a song that dedicated to the Baldia factory workers as “change can never come until they realise it’s importance.” At the concert organised by the Pakistan Institute of Labour Education and Research (Piler), the stage was simple; but large images of rescue teams combing through the factory debris, as well as those of burn victims being treated at hospitals loomed in the background. Men and women who lost their family members in the fire gathered to remember their loved ones; as they held up photographs of young men who perished, women cried and clutched their shawls to their faces. The video of Mein Bhi Insaan Hoon was filmed during the concert, and is scheduled for release in February.

“We invited the victims for a concert because we wanted to capture pure emotions which people could feel when hearing the lyrics of the song,” says Ahmed. “These lyrics convey that pain of these victims; they describe the misery and death… the helplessness of these workers.”

“When I heard the stories of children, sisters, brothers and fathers dying, I got such a weird feeling. I sat down and penned this song within an hour,” he says.

“Music for the underprivileged in Pakistan was only available through PTV,” says Ahmed.

“But since that has become a commercial institution, music for the less privileged is not available.”

He also laments that Bollywood music is accessible while our content is for a niche market. “Indian music is for everyone, but Pakistani music is now elitist. It is only available for a certain group of people,” he says.

Ahmed blames the structure of the music industry and the trend of releasing tracks online for the limited availability of music; he feels that while the urban population can listen to music online, the common man is estranged. This development has changed the scenario from what it used to be a decade ago when Ahmed burst onto the scene with Bol Tujhay Kya Chahiye.

Apart from his awareness campaign, Ahmed says he intends to continue to produce commercial music. His next 10-track album will be released on March 23 in Pakistan and India.