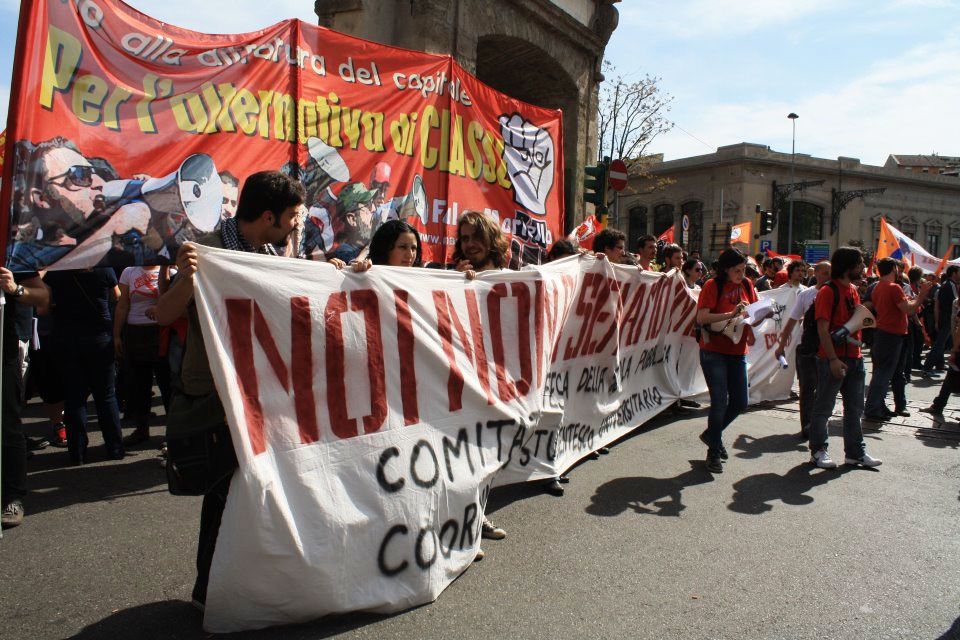 On Saturday, March 31, about 15,000 people marched through the streets of Milan on the "Occupy Piazza Affari" demo. Piazza Affari is the Italian stock exchange and the demo was the first national protest against the national unity government headed by Mario Monti.

The level of participation was significant because no major union officially backed the event. Only the grassroots “sindacati di base” mobilised for it, and even Rifondazione Comunista did not really put all its forces behind it.

The organisers are gathered around the "Comitato No debito" (No Debt Committee), an umbrella body bringing together several organisations. Falcemartello [The Hammer and Sickle], has been involved since the very beginning in this process and was able to organise a sizeable section of the "Occupy Piazza Affari" demo, around 500 strong.

The March 31 demo is a signal that something is changing in the Italian political scene. This comes after the March 9 national strike of the Fiom (the main metal workers' union) that saw a demonstration of more than 50,000 workers in Rome and especially after the last attack carried out by Monti on workers' rights, particularly on article 18 of the Workers' Statute Law [Statuto dei Lavoratori, which was a major conquest of the working class back in the 1970s]. Article 18 has made it illegal (up until now) for the bosses to sack workers on an individual level. The Cgil, the biggest of the three major trade union confederations [and historically linked to the old Communist Party, which has now become the Democratic Party] has opposed the government's proposal, giving the green light to a wave of protests all over Italy.

You can view a photo gallery of the demo here:

In the evening we organised a party in a working class neighbourhood where the local branch of the PRC is led by the Marxists h. 150-200 people turned out.

On Sunday, April 1, the national meeting of Document Number 2 [the document of the left opposition] at the last congress of Rifondazione Comunista, was held. The leadership of this opposition are the supporters of Falcemartello, the Italian section of the International Marxist Tendency. The meeting was a huge success, with more than 200 people attending, amongst them, leading trade unionists, ordinary workers, youth and the party secretary, Paolo Ferrero, who gave a greeting speech.

All the photos can be viewed here:

All this is a clear indication that the Italian Marxists are placed in a very good position on the Italian political map, and are ready to intervene in the stormy period that lies ahead.