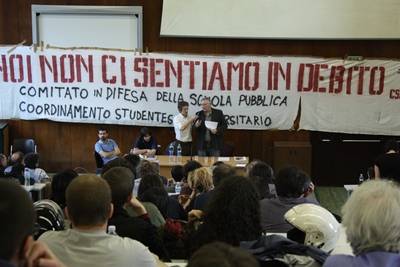 On Friday 18th May Alan Woods began his Italian speaking tour with an excellent meeting at the “Universita' Statale” in Milan, attended by over 120 students and workers. The tour is to launch the booklet Il marxismo e #occupy – ribellione o rivoluzione? (Marxism and occupy - rebellion or revolution?) recently published by the Marxist tendency of the PRC, Falcemartello.

Alan began his talk by giving an overview of the stormy international events starting last year, in particular the revolutionary process that broke out in the Arab world that has shaken the consciousness of the broad masses internationally. There could be no better rebuttal of all the sceptics in the ranks of the labour movement, bureaucrats nostalgic for a long distant past, and a ruling class that tries in every way to dismiss the idea that we have entered into an era of revolution all around the globe.

Alan spoke about the myopia of international capitalism. The bourgeoisie is unable to find a way out of a crisis which is now considered by many to be even worse than that of 1929. After plundering the public finances to save their banking system, the capitalists have demanded massive cuts to state budgets, aggravating further the position of the state debts, because of a spiral of lower tax revenues made worse by the depressive effect on the economy of state budget cuts.

He very effectively explained how, whichever route the European bourgeois choose to take, the position of the weakest links of capitalism on our continent are likely to get worse, leading to a general crisis of the European banking system. Alan continued:

"The bourgeoisie is tobogganing toward disaster with its eyes wide open. Precisely for this reason they have no other option than to unleash a real class war against the achievements that the labour movement has gained in two centuries of class struggle."

And for the same reason whoever places themselves in the way of this conflict will eventually be crushed, starting with the trade union apparatus and the leadership of the traditional parties of the left which reflect the past state of the working class and not the present or the future.

This opens a convulsive epoch where theories, methods and programmes will be put to a forcible test, as we saw with the movement of the Indignados in Spain and #occupy in the United States. These movements are able to raise a genuine youthful rebellion against the system but are stranded for a lack of revolutionary leadership and lack of a democratic method able to broaden the struggle. This requires strengthening the forces of Marxism struggling to win the labour movement to the programme and methods for which they were born: that of Marxism, the distilled experience of the organized working class. Only then will it be possible to build the subjective factor necessary, not only for the conquest of political power by the organized working class, but also the maintenance of that power. 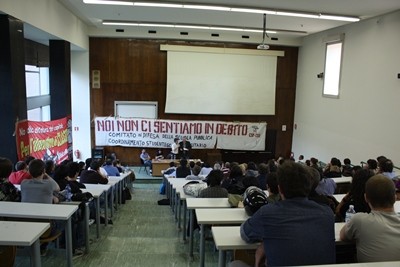 After Alan Woods' lead off there was a brief debate with contributions and questions. The main theme touched upon was what lessons we can draw from the international situation, especially Greece, for the Italian workers, and what role the communists should play? Specifically it was asked how we can explain the delay in the development of the class struggle in Italy, compared to other European countries and questions about the development of mass support for SYRIZA – the left organisation which is likely to become Greece's biggest party at the upcoming June elections.

Alessio Marconi, national coordinator of the Committees in Defence of Public Education (CSP), explained how a new awareness has developed amongst the youth in the recent mobilisations and how the crisis of capitalism itself has swept away most of the traditional abstract approach of the student movement, raising the question of the role of the working class.

Alessandro Giardiello, supporter of the Marxist tendency within the national leadership of the Communist Re-foundation Party (PRC), focused on the impact of the collapse of Stalinism in delaying the crisis over the past decades by opening new markets for capitalism. He also spoke about the relationship between party and consciousness within the labour movement, analysing the difficulties faced by the PRC, mainly due to the mistaken policies of the leadership in the past and the progressive erosion of the trade union roots of the party.

A special appeal was made in solidarity with the Marxist within SYRIZA, organized around the paper Epanastasi (Revolution) that are carrying out a revolutionary struggle among the workers and youth of Greece in a very difficult economic situation for the working masses and their families. This appeal will be repeated at all future meetings organised around Alan's speaking tour in the next few days.

The conclusions by Alan stressed the need not to be impatient. The consciousness that has accumulated for 20 years can have a qualitative change in 20 days. It's just what we are seeing in Greece: SYRIZA will probably become the first party and will be tested by the workers that are supporting them because they want a profound change.

The working class does not understand small organizations: before abandoning their traditional organisations the workers will first try to change them, again and again. This also applies to the PRC, which will most likely rebuild part of its traditional support on the basis of the Monti government's crisis, provided the party does not compromise with the government against the workers.

The Italian bourgeoisie has a programme of blood and tears ready for the next ten years. The Italian workers will react like the Greeks. "Italy will be like Greece, as day follows night," said Alan in his final remarks, "we must build the forces of Marxism, and in Italy this means building Falcemartello. We must be ready for the future that awaits us.”

Alan's speaking tour continued on Saturday, May 19 in Genoa, and will be followed by visits in the next few days to Bologna, Rome and Naples.