Share
Tweet
In spite of having promised no more NATO or US bases in Italy, the Prodi government has gone ahead and agreed to a big expansion of the Vicenza base. This has provoked anger among the left electorate which was clearly seen on last Saturdayâ€™s massive demonstration of at least 150,000. 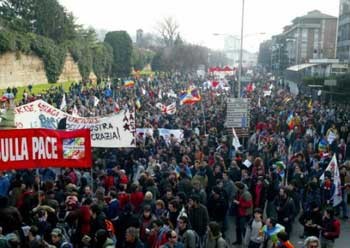 On Saturday, February 17 more than 100,000 people flooded the little town of Vicenza, in the North East of Italy. A national demonstration was called against the expansion of the Ederle US base, on the outskirts of the town. (For background information about this question, read our interview on the US Socialist Appeal website.)

Over recent months, tens of thousands of workers, youth, housewives and pensioners had joined the struggle against the expansion of the base, in a town which had always been considered one of the most politically backward and conservative in the country. At the beginning of December, 30,000 people had already marched against the base, and a permanent picket has been organised in front of the base where hundreds of people have been meeting regularly every day. But last Saturday's demonstration marked a qualitative step forward in the struggle.

Just one month ago the Centre-left government, after months of a "wait and see" attitude, pressed by the US government, came out in favour of the base. "On Vicenza the decision has been taken," announced Prime Minister Prodi in an arrogant tone, without consulting the population whatsoever.

Thus in Vicenza, and throughout the whole of the Veneto region, a revolt erupted within the rank and file of the left parties of the "Unione" coalition [the name by which the Centre-left coalition is known]. All the Veneto MPs of the Centre-left coalition came out against the decision of the government, and some of them even resigned from their parties. On the same night that Prodi uttered 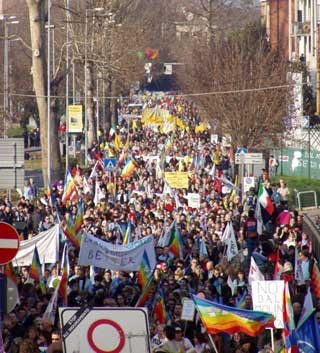 his unfortunate statement, hundreds of DS cards were burned in a 7000 strong demo organised spontaneously through the streets of Vicenza. [The DS were formerly known as the PDS, the new social democratic party that emerged from the split in the old Communist Party in 1991]. The Cgil, the main trade union confederation, has also opposed the expansion of the base and mobilised for the Saturday 17 demo.

The expansion of the Vicenza base is one of several questions that reveal the big disagreements that exist within the Unione coalition. In the period leading up to February 17, a big campaign was waged by the media and the right wing of the Unione, in an attempt to criminalise everybody who was against the base.

At the beginning of last week, a police operation against some elements linked to the old "Red Brigades" terrorist group, was used as an excuse to launch a new hate campaign against anyone was planning to participate in last Saturday's demo.

Not only the bourgeois media, but also members of the cabinet were warning about the likelihood of clashes and of terrorist infiltration in the Vicenza demo. Their aim was to create a mood of extreme tension around Saturday's demo and to scare people away. 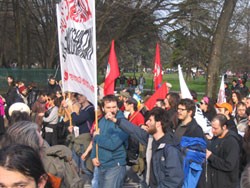 Prodi made it very clear that no member of the cabinet was allowed to go on the demo. The PRC ministers and undersecretaries obeyed the order, as did all the members of the cabinet who oppose the base (Greens, PDCI, the Party of the Italian Communists, and the left wing of the DS, Left Democrats).

Once again the leaders of the left wing succumbed to the pressures of the bourgeois wing of the coalition. Of course, the PRC leaders issued statements explaining that they are against the building of the base. But they are facing a dilemma they have created with their own hands. If they were to vote against the decision in parliament, they would be placing the Prodi government in a minority. So while they make statements against the expansion of the base, in practice they support it!

Since last April, when the Unione won the election by a narrow majority, the PRC leadership has fallen into this trap several times: on the budget, on privatisation, on Afghanistan, etc. The PRC and the other left parties are like a boxer who has allowed himself to be punched into the corner with no way out, waiting for the bell to end the round. 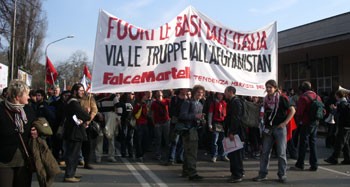 One of the main factors that explain the defeat of Berlusconi was the Iraq war together with the slavish support given by the right-wing government to every US mission around the world. The Centre-left national government had clearly stated in its electoral platform that they opposed any new NATO or US bases in Italy. Now they have changed their mind, due to the pressures of US imperialism.

The problem is that no one (not even the PRC leadership) wants to break with NATO. There is a logic to this. For if you do not question the alliance, then you are forced to respect the commitments you have with NATO, and one of these is to host NATO bases on your country's soil. NATO and US bases are in fact spread throughout the whole Italian territory, and the real solution therefore is to remove all the NATO installation from Italy.

The demo had a big impact on Italian society. A growing dissatisfaction is mounting, but it is totally unorganised. There is a layer of the Italian working class that is looking for an alternative, although it is still a minority layer. Some of the banners carried by the demonstrators were a reflection of this process, such as "From Val Susa to Vicenza, patience has a limit". Val Susa, a valley near Turin, was the place where the Berlusconi government would have liked to build a new high-speed railway line. The heroic struggle of tens of thousand of workers and youth stopped the project at the end of 2005. Now the Prodi government wishes to put the issue back on the agenda.

After one year in power not even one of the contradictions of this government has been solved. On the contrary, every new issue is a source of conflict between the parties that make up the coalition. On the one side, the right wing parties are deeply divided and cannot provide an alternative. On the other, the workers' parties and the trade unions have swallowed everything proposed by Prodi, but which is still not enough for the bourgeoisie. They need the support of the PRC and the trade unions in order to introduce new counter-reforms in the pension system and more privatisations. It will only be when these objectives have been reached that Prodi can even consider dismissing the left parties

FalceMartello supporters were present on the demo with their own more than 200-strong section. We carried a huge banner with the slogan, "Bases out of Italy, troops out of Afghanistan." More than 400 papers were sold, a big success, which reflects the fact that our ideas and slogans are connecting more and more with the active layers of the working class.

The struggle in Vicenza will continue. Prodi has made it very clear: "we are not going to change our plans". That is why another qualitative step forward is needed. The organised working class must enter the arena of struggle in an organised manner. The calling of a general strike to stop the expansion of the base must be put on the agenda. The trade unions supported Saturday's demo but they did not really make a big effort to bring people onto the streets. From words they must pass to deeds. Their attitude must change, and the Marxist tendency will play its role in this process.