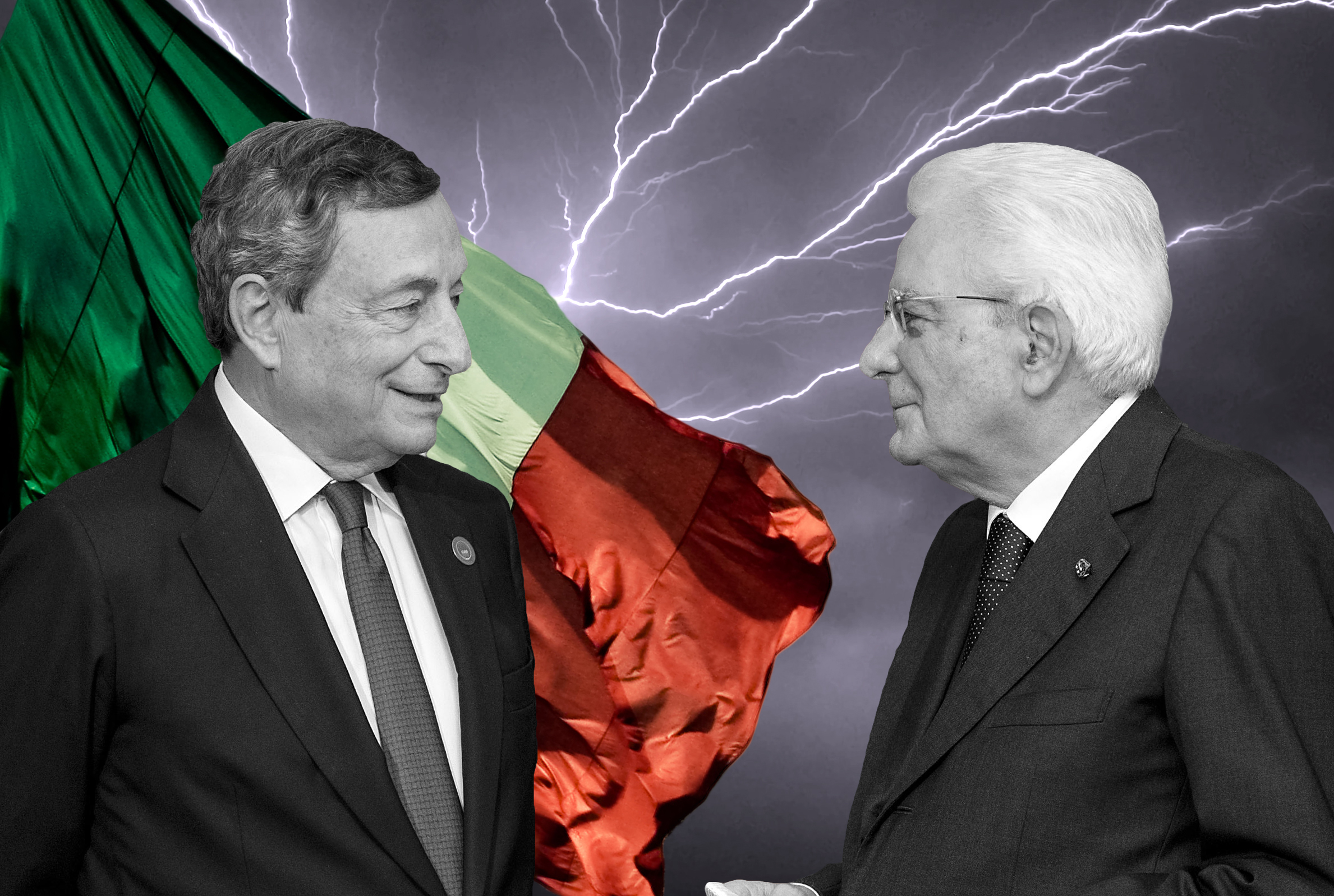 This article was written on 23 July, just a few days after the collapse of the Draghi government. Italy is heading towards a parliamentary election, scheduled for 25 September. For the latest analysis by our Italian comrades on the attitude of the Marxists towards the election, click here.

The Senate debate on 20 July marked the end of the Draghi government. The ‘government of the best’, much yearned after and supported by the capitalist class, enjoyed a very large parliamentary majority of 554 out of 630 deputies and 265 out of 321 senators, until a fortnight ago. In four hours of debate, it crumbled, leaving behind an insoluble situation of fragmentation.

Mattarella [the Italian President] was forced to dissolve parliament and to call new elections for 25 September. This is the first time in the history of the Italian Republic that parliamentary elections have been held in the autumn, i.e. just as the new government budget is about to be drafted.

This abrupt reversal may seem incredible to those who reason only in terms of parliamentary arithmetic (Draghi having had an overwhelming majority), but what this really exposes is a structural feature of the present era: the inability of the ruling class in the context of a protracted crisis of capitalism to secure for itself reliable and stable instruments for its political rule. We need only look at the British government, which has also disastrously collapsed just a few weeks ago [Johnson resigned as Prime Minister on 7 July], in the country that was once the home of stable institutions.

On closer inspection, the Draghi government was precisely a product of this instability; of a parliament elected in 2018 in the name of rejecting all establishment parties, but in which the most unscrupulous alliances succeeded each other. Finally, when the same parliament fell into political deadlock, the capitalist class imposed its own man through a palace coup staged by President Mattarella. 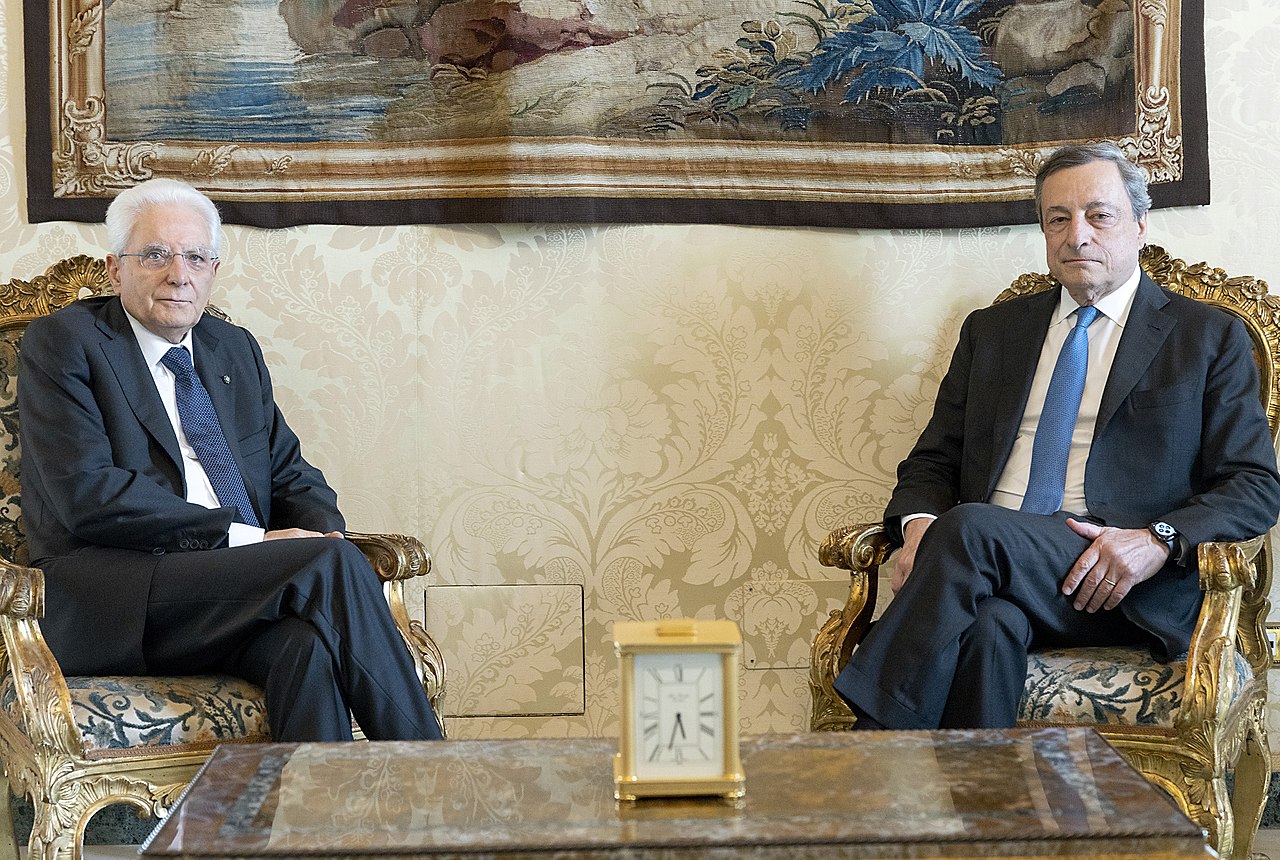 The election in 2018 gave a result based on the rejection of all the parties and the establishment. When this parliament fell into deadlock, President Mattarella carried out a 'palace coup' to effectively impose Draghi, with the full support of the capitalist class / Image: Quirinale

Draghi took office as the saviour of the fatherland, and imposed a new rule: ‘I decide’. But securing the iron stability to the government inevitably meant destabilising parties that were forced to realign themselves, especially the Lega [‘the League’, a right-wing party led by Matteo Salvini] and M5S [the Five Star Movement]. It was enough for Fratelli d'Italia [‘Brothers of Italy’, a far-right party] to stand out as the only visible opposition, taking a monopoly of reactionary propaganda, for Salvini’s party to haemorrhage support in their direction and for them to become the first party in the polls. Meanwhile, the M5S broke into pieces in parliament and collapsed in the polls, amidst babbling and internal clashes.

With the elections drawing ever closer, it was necessary for these parties to try to distinguish themselves from the government on any pretext, as M5S did on the ‘Decreto aiuti’ [State aid decree], but at that point Draghi reiterated that he was not going to tolerate vetoes or blackmail and so the clash opened up.

We must say, the mobilisation of the bourgeoisie in support of Draghi was impressive. A partial list of appeals in his support included: Bonomi’s [the head of the bosses confederation] statement and an appeal by Sole24Ore [the daily paper of the bosses confederation] with CEOs, former ministers, and assorted high-ranking figures; public support from the bishops and the Vatican; an appeal by 2,000 mayors; an appeal by university rectors; an appeal by healthcare professionals (the opinion of healthcare workers would have been more interesting...); an appeal by several associations (Arci, Acli, Catholic Action, etc.). In addition to these, there were countless international statements, from the Financial Times to the Spanish Prime Minister Sanchez via Zelensky. Even the president of CONI (National Olympic Board) felt compelled to say that without Draghi, Italian sport could not survive!

But precisely the extent of this mobilisation demonstrates how thunderously it failed. Draghi wielded these appeals and gave an ultimatum to the dissident parties, who would have to answer ‘to the Italians’ for their decisions; but, despite all the pressure, Forza Italia and the Lega definitively broke the house.

You don’t have to be a Marxist to see how rotten the institutions that govern us are. It is obvious to anyone that these people will say one thing and the exact opposite, depending on the convenience of the situation. The crisis erupted just a few days after the parliamentary term was over, in order to guarantee MPs’ pensions: this is just the last piece in their mosaic of squalor. In a recent poll, 65.3 percent of Italians said they had ‘little or no trust’ in the political elite, and only 6.3 percent said they had ‘a lot of trust’. This distrust of institutions is well deserved and is now rooted in mass consciousness.

The fairy tale of the upright Draghi defending the country despite the manoeuvres of the  politicians may apply to Confindustria, the PD [the Democratic Party], Calenda [the leader of Azione, a centrist party] and a few others. The ‘Italians’ who are in love with Draghi are the big business owners, the senior officials, the professionals who signed those appeals. Certainly not the workers who see their purchasing power plummeting in the face of inflation, or the unemployed whose ‘Reddito di cittadinanza’ [citizenship income, a sort of unemplyment benefit] is also under threat. The Draghi government’s crisis manifested itself on the parliamentary field, but developed day by day in the increasingly difficult lives of tens of millions of workers, young people and pensioners.

In fact, the street mobilisations in support of Draghi were squalid gatherings of a few dozen friends of Renzi and Calenda in suits and ties, with a few offspring of well-off families joining them.

Outside the world of the regime’s propaganda, support for Draghi and his government had fallen firmly below 50 percent. After months of a suffocating pro-war campaign, only 16 percent of Italians are in favour of sending arms to Kiev, and the rhetoric of “sacrifices in the name of peace” is rejected by the masses.

When we look back on this government, we will remember the billions given to big business, the end of the ban on layoffs, the cuts to healthcare, and the selling off of public education to corporations. This government, which was an enemy of the workers, has now fallen.

Those who now talk about a centrist coalition ‘in the name of Draghi’, ranging from the PD to the Forza Italia splinters, as well as having to demonstrate its feasibility, claim this legacy and no other.

The ruling class now looks to the horizon with concern, and they have every reason to. Italy is heading for a new recession, with inflation at an all-time high and stagnating wages. It is a finished recipe for an explosion of the industrial struggle and struggles on other fronts, a process we already see unfolding in several countries: the railway workers’ strike that paralysed Britain is just one of many such examples.

The ECB’s decision to raise interest rates for the first time in ten years and the fact that any support for Italian debt (at 152 percent of GDP) will be conditional on budget constraints will force the progressive return to austerity measures. Already, Draghi had begun to cut subsidies and so-called ‘unproductive spending’, an expression that nine times out of ten means money allocated for the working class, and now it will be necessary to tighten the screws even further.

In the middle of this minefield, the ruling class has lost its most reliable man.

In all likelihood, the next election will be won by the centre-right, with Meloni’s party [Brothers of Italy] playing a decisive role. Already, in the debate for the vote of confidence, her senators wished to reassure the bourgeoisie: “we have enough with the tale of the barbarians at the gates, we are responsible people who already rule local authorities, and we have also changed our line on foreign policy”.

The ruling class actually has no doubts that the right wing will defend its interests, but it is worried because it will do so by directly provoking the workers’ movement and the youth, in a context where any accidental element can unleash tensions that have reached their limit.

Attacks of a class character; on trade union rights, layoffs, citizenship income, education, healthcare, will go hand in hand with the whole reactionary weaponry of xenophobia, sexism, homophobia and repression. Workers and young people will have to – and will – fight back against these attacks. The turning point of recent days has thrust us, at an ever-accelerating pace, into an explosive phase of class struggle.

The entry of the working class onto the stage will completely change the political and trade union setup. It is intolerable that the leadership of the CGIL [the main trade union], in the midst of the government crisis, has appealed for the stabilisation of the Draghi government, in harmony with the campaign by Confindustria, and it is today paralysed by the idea of losing political backing in the government.

Thirty years of lost gains tell you everything about the outcome of this line. Do we want to oppose the right wing by harking to ‘the good times’ of the Draghi or Conte governments? The force on which the unions ought to rely is that of the working class; a force that can stop any attack and lead a counter-offensive to retake everything they have taken from us! The phase that opens before us will not spare anyone, and we must prepare ourselves accordingly.

With this anti-worker administration collapsing, the main trade union CGIL disgracefully joined appeals to stabilise Draghi's government. In the stormy period opening up, there can be no looking back to the "good old days" of Draghi and Conte. What is needed is a clear revolutionary perspective, which the comrades of Sinistra Classe Rivoluzione (IMT in Italy) are raising / Image: Sinistra Classe Rivoluzione

On the political terrain as well, we therefore need to advance a thorough alternative to this political and economic system. Not a generic repainting of progressivism in the name of the citizenship income, as Conte is preparing to do, in order to save what is left of the M5S, nor short-lived electoral coalitions based on a mixture of reformism and left-wing populism.

In the face of a crisis of this magnitude, it is necessary to put forward a clear revolutionary perspective, and to invest our efforts so that this perspective can win in the real field of the class struggle that inevitably lies ahead. This is the work that Sinistra Classe Rivoluzione (Left Class Revolution) will do, and we invite those who share our sense of urgency to join us and give this work an organised form. On this basis, we must immediately begin preparing for the autumn ahead, with the awareness of the clash that are coming, the clarity that comes from Marxist analysis, and with optimism derived from the unrivalled power of our class.