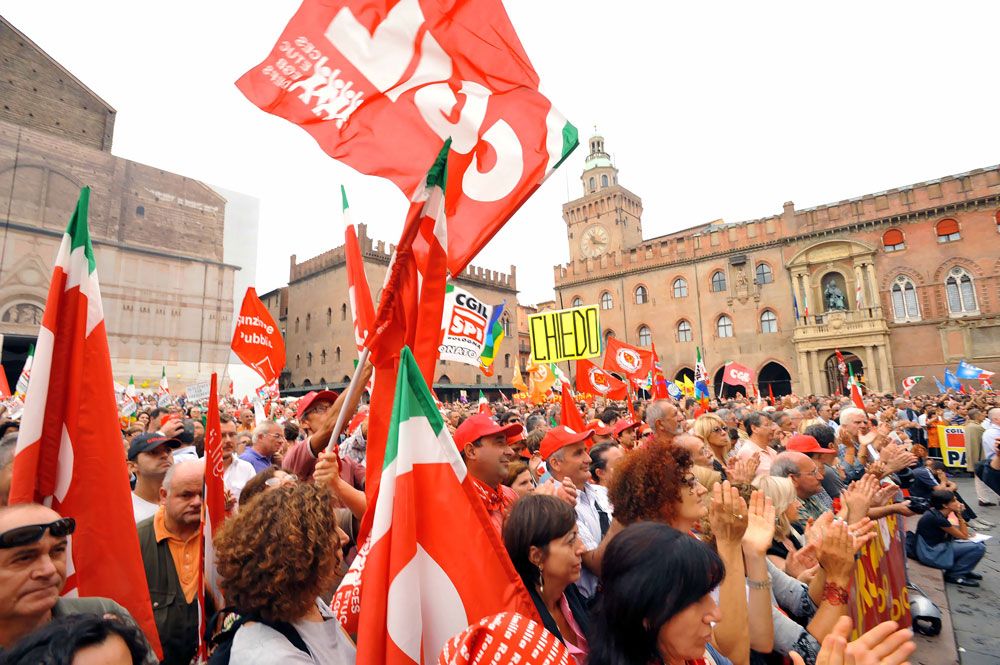 On Tuesday, September 6, hundreds of thousands of workers and youth flooded the streets of more than 100 Italian towns and cities, answering the call for an 8-hour general strike made by the CGIL, the main trade union confederation.

It was the first time in the history of the Italian labour movement, or at least since the Second World War, that a general strike has been called just a few days after the summer holidays. This very fact reflects the extraordinary political and economical situation of Italy, which is following the same path as that of Portugal, Greece and Spain.

The attacks by the markets and the speculators (read: the capitalist class) on Italian state bonds and the stock exchange has resulted in an unprecedented assault on the rights and living standards of the workers and their families. It is no exaggeration to say that since this summer Italian economic policy is no longer decided in Rome or Milan but is dictated by the European Union, the IMF and the European Central Bank.

The Italian parliament is about to vote on a €55bn euro budget, consisting of severe cuts in welfare, attacks on pensions and on the age of retirement for women, a VAT (purchasing tax) hike and a vicious onslaught on labour rights. National collective bargaining is to be abolished by law and individual sackings – forbidden according to the law known as the “Statuto dei lavoratori” (“Workers’ Statutes”), one of the main gains of the workers' struggles in 1970 – are to become legal again.

The budget that is presently being discussed has changed several times in the space of a mere 30 days – this being version 4.0. The Berlusconi government has been pulled in all directions and has dithered and changed its mind practically every day, revealing its inner weakness. The President of the Republic, Napolitano (a former leader of the Communist Party until its dissolution in 1991) stepped in to resolve the impasse, calling for “more effective measures” to be taken and to act quickly. The bosses’ confederation, the Confindustria, which had been very critical of the previous versions, applauded the new measures, but, as could be expected, is crying for more.

However, even this latest version 4.0 may not be the last since every fall in the markets leads to an increasing spread between German and Italian bonds, and therefore more interest to be paid by the Italian state. From a capitalist point of view, it is a real catch-22 situation!

Berlusconi hanging by a thread

The Berlusconi government is hanging by a thread but as the instability will increase even more if it falls, for the time being the bosses, Napolitano and the Troika [IMF, ECB and EU] are forced to keep him in power. The alternative would be some kind of government of national unity. This would in fact be an option, but it would be necessary to first get rid of Berlusconi, which could take some time, time which the Italian bourgeoisie does not have. And in any case, the present parliamentary “opposition” is playing a “responsible” role in not putting up any unnecessary obstacles to the measures being proposed. In fact, if anything, this “opposition” is complaining that Berlusconi is not being serious enough!

Bersani, the leader of the Democratic Party, has indeed made very fiery speeches against Berlusconi. It has also to be said that “anti-Berlusconi-ism” is becoming very fashionable in Italy today, almost like a popular sport here in Italy. The point, however, is that the Democratic Party’s policies do not differ from those of the government. The Democratic Party is in favour of paying the debt, cutting the state budget and privatising all the state assets. One of the main Democratic Party’s criticisms of the present right-wing government is that it is too timid in taking the necessary measures and this weakness invites aggression from the markets!

No real alternative posed by the left and trade union leaders

The opposition parties in Italy, similarly to the Social Democracies all over Europe, are keen to demonstrate that they are the best equipped to do the dirty work required by the capitalists. Even the leaders of the PRC [Party of Communist Refoundation] do not put forward any real alternative. Against the dictatorship of the banks, they propose the “democratisation” of the European Central Bank. Against the big profits made by the capitalists, they suggest a tax on property. And there is no talk of nationalisation of the banking system, because this, according to the PRC leaders, would not be “realistic” and “it would not be understood by the masses”.

The same attitude is shared by the leaders of the CGIL, the biggest union confederation that was once controlled by the Communist Party. The election of Susanna Camusso as general secretary last November was a clear sign of a turn to the right within the CGIL leadership. The CGIL leaders’ main concern has been to break the “isolation” to which they have been relegated by the right-wing government, which has established a preferential relationship with the other two more moderate union confederations, CISL and UIL.

The CGIL leaders’ strategy has been that of establishing an alliance between the trade unions and the bosses against the government. This was formally put in place with the June 28 agreement between Confindustria, CGIL, CISL and UIL. This was followed by a joint letter sent by the trade unions, the bosses and other business organisations to the government. The joint letter, signed by Camusso, committed the union to supporting the “stability pact” to be written into the constitution (the same as the one voted by the Spanish parliament a few days ago) and to a speed-up of the programme of privatisations.

However, unfortunately for the right-wing leaders of the CGIL, all these efforts at building “social compromise” have been interrupted by the impact on workers’ lives of the capitalist crisis and by the harsh response of the European and Italian capitalists. There is no more room for compromise and the pressure from below forced the CGIL leaders to call the September strike. And the mass demonstrations seen on September 6 are another indication of the growing radicalisation of the Italian masses that in the last few months has revealed itself especially on the electoral front.

We have already analysed the defeat of the right wing in the local elections in May, (see Italian local election results show Berlusconi’s twilight) but what was even more significant were the referendums held in June. For more than fifteen years successive referendums had failed to achieve the quorum of voter participation required for a referendum to be valid. This time, however, the turnout was 57% and the voters expressed an overwhelming NO (between 94 and 97%) to the privatisation of water and other social services and also to nuclear power. With this vote, the Italian masses rejected one of the main planks of capitalist dogma of the last thirty years, i.e. that private ownership is good and that state ownership is almost tantamount to a crime.

The June referendums referenda were initially opposed by all the parties represented in parliament, including the Democratic Party, which only joined the bandwagon when it was clear that there was a growing mood among the population in favour of them.

Radicalisation was also expressed in a number of local struggles, but also some which had a nationwide echo, such as in Valsusa (near Turin) where a mass protest has been going on against the building of an High Speed Train route from Turin to France. The building of this railway route will cost more than €20bn while the train network that already exists in Italy is in an appalling state.

In Valsusa what we have seen is a mass revolt taking place with the majority of the population of the valley against this insane project. And although there has been a real militarisation of the area, with thousands of police and carabinieri sent in, the works have not really been able to start yet because of the defiance of the masses in struggle.

This shift to the left in society in general has, however, hardly been reflected in the leadership of the trade unions and of the parties of the opposition. Immediately after the September 6 strike, Camusso has been insisting on the position of social compromise and is again defending the June 28 agreement against the government's budget. Within the CGIL national leadership only the left wing headed by the FIOM, the metalworkers’ union, voted against this. No new strikes are being prepared by Camusso, but it will be very hard for her to stick to this position given the stormy period that is being prepared for the Italian economy.

On the political front, Vendola (the governor of the Apulia region and leader of the Left, Ecology and Freedom party, the SEL, the right-wing split from the PRC in 2009) is challenging for the leadership of the centre-left. To achieve this, he has formed an alliance with a sector of the old anti-globalisation movement (the former “White Overalls”, which still plays a role within the Italian left) and a sector of the leadership of the FIOM. This grouping is pushing the idea that it is possible to influence a future centre-left government with “the strength of the movements” – an idea that proved disastrous in 2006-08 and that is once more being dragged up in an irresponsible manner by these “leaders”.

Role of the Marxists

Rifondazione Comunista is holding its national congress in a couple of months. The idea of the majority of the party leadership is to propose a “democratic alliance” with the Democratic Party, i.e., to offer external support to a future government. This is an idea that the supporters of FalceMartello will fight against in the congress with an opposition document that will stress the need to build a political representation of the working class and its struggles, which is the main factor that is lacking in Italian politics now. The PRC must play a key role in the rebuilding of a political party of the working class. The title of our document will be “Per un partito di classe” (“For a class party”)

What is needed now is not a political position which has its roots in the distant past, in a period when it was possible to win some concessions from the ruling class in a period of upswing – albeit through bitter class struggle. The period we are living in is one in which the bourgeoisie is launching an all-out attack on the gains of the working class, and the social democracy is the instrument that they prefer to use in achieving this, as the Greek and Spanish experiences reveal.

The workers in Italy need a policy based on class independence, both from the so-called centre-left and from the right wing. This is the only way in which they can rebuild their own political expression, their own mass working class party through which they can achieve their own emancipation.

After having gone through a period of disillusionment and defeats on the political and industrial fronts, the Italian working class is preparing to regain its rightful place in the class struggle in Europe and across the Mediterranean, side by side with its brothers and sisters in Greece, Spain, Egypt and Tunisia. The Italian Marxists will be at the forefront of this process.