Share
Tweet
It is simply impossible to estimate the real size of the demonstration which flooded the whole centre of Rome on Saturday March 23, but it is likely that the figure was close to three million people. There were six different sections marching from different points and converging on the centre of Rome, in the Circus Maximus. This day will not be easily forgotten. 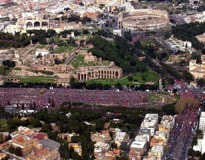 "They say we are alone. Well, this means we will be alone…but together with millions of workers." These were the words of a shop steward during the last congress of the Cgil [the biggest of the three main trade union federations, historically linked to the Communist Party] and they were fully confirmed by last Saturday's massive demonstration in Rome.

It is simply impossible to estimate the real size of the demonstration which flooded the whole centre of Rome. The police figures of 700,000 are clearly a gross underestimation. The Cgil gave the figure of three million, and almost everyone agrees that it was at least 2 million strong. Whatever the exact figures may be, the facts are as follows: six different sections (marching from different points and converging on the centre of Rome) made up the demonstration, covering a total of about 30 kilometres, and 60 trains, 9,000 coaches and two ships from Sardinia brought the marchers to Rome. "Everything that can move is going to Rome," were the words of one trade union official in Milan a few days before the demonstration. "We are going to Switzerland, Austria and Slovenia to find some more coaches to hire." The Circus Maximus was absolutely full, with a tailback of one mile stretching beyond it. There was even a sizable part of the demonstration which never actually got to the end.

This day will not be easily forgotten. The reaction of the government and the bosses is quite telling. After having tried to dismiss the turnout ("just half a million" said a right wing MP), they are attacking the workers and the Cgil as terrorists, trying to portray the assassination of Marco Biagi by the Red Brigades as a consequence of the workers' struggles. Here are some gems:

"It is a bad day when people demonstrate against Marco Biagi's ideas." (Sacconi, deputy prime minister). Antonio Martino, defence minister, said: "This demonstration is an enormous danger for our free democratic institutions."

The scenario which is now opening up is still uncertain. As we reported earlier, the government is trying to divide the trade unions and to come to a separate agreement with the Cisl [historically the "Christian" and more moderate trade union federation]. However, the success of the demonstration clearly puts strong pressure on these unions too. The three union federations (Cgil, Cisl and Uil) have now started talks with a view to calling the forthcoming general strike jointly (whereas before the Cgil was going alone); meanwhile, Cofferati (general secretary of the Cgil) has stated that until an agreement is reached with the others the Cgil is sticking to the date of April 5.

The possibility of overthrowing the government is clearly present. Behind the facade of strength and intransigence, the ruling class is divided on this growing conflict, and so are the parties that make up the right wing coalition government.

The main problem is, as always, a problem of leadership. Cofferati has now conquered a leading role in the opposition. All the other forces who oppose Berlusconi are for the time being compelled to follow the Cgil and support it in words, including those bourgeois parties who are in reality very much closer to the Confindustria [Italian bosses' union] than to the Cgil. But as the conflict widens and become deeper, the sharp political and social polarisation taking place will have its effects on all parties, and divisions and even splits will be on the agenda.

While this movement is developing, the Prc (Partito della rifondazione comunista) is holding its local congresses (the national congress will be held on April 4-7). It is a real paradox that the Party's national secretary, Bertinotti, is stubbornly refusing to call for the overthrow of the government. Just a few day before the demonstration, Bertinotti said that "it would be a gross mistake if we said that this struggle is against the government; it's a trade union struggle, to which we must give support together with the other opposition parties." This position amounts to an obliteration of the role of the communists in the workers' movement. Our party runs a big risk of just becoming a mere number in a list of organisations, supporting a struggle which, despite its enormous size, is still led and controlled by the social-democratic bureaucracy at the head of the Cgil, a force whose aim is mainly to keep the movement in safe channels and certainly not to lead it towards an all-out offensive against the bosses and their government.

This tail-ending of the "movement" is nothing new for the Prc and for Bertinotti in particular. The same attitude was adopted last year regarding the anti-globalisation movement, and if we go back to 1994, when the first Berlusconi government was overthrown by a massive wave of strikes we see that the same mistake was committed then. At that time, Bertinotti said that communists had to restrain themselves and not criticize the trade union leaders insofar as they were calling the strikes. This attitude allowed the trade union leaders to derail the movement and to bring it to a halt, channelling the struggle towards the class collaboration embodied by the centre-left coalition.

The left wing of the Prc, which we are part of, is engaged in a sharp struggle to reaffirm the basic ideas and methods of Marxism, starting with the idea that the first task of a communist party is to struggle for influence and hegemony in every working class movement and struggle, and to defend the communist perspective as the only answer to the ever increasing contradictions of the capitalist system.

At the moment the mood prevailing in the working class is one of trust in the leaders, especially of the Cgil, who they see as fighters who are doing what has to be done. There is also a strong urge for left unity which puts an objective pressure on the Prc. What is needed now is a skilful combination of active participation in the struggle, political explanation and friendly criticism of all the shortcomings of the Cgil leaders. This is necessary if the party is to avoid isolation and mistakes of both a sectarian and opportunist nature.

The upsurge of class struggle will put every party and tendency to a severe test. The events are fully confirming our previous perspectives, and we are confident that the ideas and methods of Marxism will be able to get a wider basis in the new generation which is now coming on to the scene.