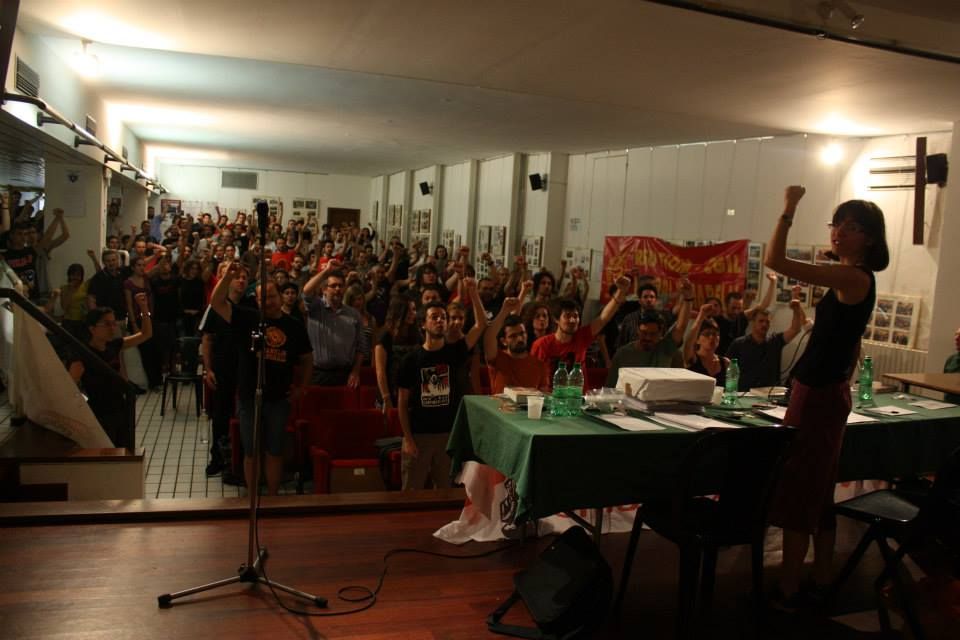 More than 200 hundred people from 28 towns and cities from the very north of Italy to the deep south of Sicily gathered for the national meeting organised by FalceMartello over the weekend of July 6-7. “The Left, the working class and revolution” was the main theme of the gathering, which proved to be a huge success, with a rich and fruitful discussion.

The composition of the audience was very mixed. A good number of trade union activists and long standing revolutionary cadres, and a sizeable number of youth as well, who have recently joined or come closer to the Marxist tendency in Italy through the work of “Sempre in Lotta” (Always in Struggle”) the youth organisation established last September.

There were three main discussions, the first under the title “Against the Keynesian utopia, what alternative to the crisis?” During the debate a draft programme for a revolutionary alternative was presented. (See in Italian: http://www.marxismo.net/prc/un-programma-per-lalternativa-rivoluzionaria-bozza)

Discussion on the programme

In his lead-off, Roberto Sarti stressed the need for a programme which does not bend to the prejudices of the masses or to today’s level of consciousness of the working class, but is based on the needs of the objective situation and on what our class as a whole requires. A Marxist programme is not a collection of “reasonable and possible demands”. Those who stick to these criteria, such as the reformists, have ended with nothing in their hands and have sold off the working class.

“Today, the world has never been so unequal: 8% of the world population possesses 50% of world income”, said Sarti and “the trade union and left-wing leaders have become managers of the capitalist system”. A reformist programme and a reformist outlook were two of the main reasons for the disaster of the left in Italy. A programme that stands for the nationalisation of the banking system and of the commanding heights of the economy under workers’ control cannot gain the majority amongst the working class in “ordinary times”. “But the Bolsheviks in 1915 were also alone and against the stream. A popular joke at the time stated that all the internationalists of the world could fit into two coaches of a train at that time. But within two years Lenin was leading the October revolution. Well, today in this hall we are more than the Marxists in 1915!”

The debate started on this optimistic note. Gabriele D’Angeli explained that there is a whole number of demands that could be right in the abstract. Take the slogan of a heavy progressive income tax, for example. Without workers’ control over the tax system, it simply can’t work. Workers’ control is a key element for every transitional programme.

Serena Capodicasa criticised the propaganda over the European Union. All that rhetoric about the blue flag with the nice yellow stars is in pieces. Europe has revealed itself for what it is: a union of the bankers and the capitalists.

Luigi Piscitelli and Antonio Erpice talkeds about the appalling conditions faced by the youth and working class families in the south. A way out is possible only through a break with the capitalist system. A special chapter on the situation in the south of Italy (the “Mezzogiorno”) will be discussed in a meeting of Falcemartello supporters in the South at the beginning of this coming autumn.

As Marco Sandrin, a worker comrade from Friuli Venezia Giulia [in the North East] said: “If we don’t defend this programme no one else will do. The alternative must be revolutionary, or it is nothing.”

The debate on the programme showed a high level of maturity of everyone who contributed.

On the Saturday afternoon, there was a session on the trade unions and the workers’ struggles.

Paolo Grassi introduced the debate. In the last two years there has been no major movement of the working class in Italy. First under Monti, then now under Letta, trade union leaders were able to successfully hold back the bulk of the working class, under the idea of the need for “national unity”. But, as working conditions and living standards are worsening, this relative social peace cannot last for long. He compared today’s situation with the one just before the Hot Autumn in 1969.

Today, as in the sixties, very militant struggle seem to be coming from nowhere. In reality, they are a reaction aginst the arrogance of the bosses. In the last few weeks we have withessed a number of sharp conflicts, related to mass redundancies and factory closures. From Indesit to Berco, from Whirlpool to the Terni steel plant, thousands of jobs are at risk. Several of these factories have no union or any strike traditions: but after the bosses’ attacks the mood changed suddenly overnight. This is the kind of music that we are going to hear in the future at a general level.

Paolo emphasised our tasks linked to the winning of the majority of the workers to revolutionary ideas: the intervention in the strikes, the CGIL congress, which is scheduled for the beginning of 2014, the planning of the intervention of the entire organisation (workers, students, unemployed and sympathisers) in the workers’struggles and at the factory gates.

A very useful tool was launched last winter, Radio Fabbrica [Radio Factory], a bullettin, originally brought out to coordinate the FIAT workers, but has now become a tool for the intervention of the Marxists in all workplaces. Four issues were printed in the last eight months. Hundres of copies of each issue have been sold. It ha become a point of reference for a sector of the advanced layers. The contributions in this debate were too numerous, 20 in all, to be able to mention all of them here. But one could get a taste of the deep roots that Falcemartello has sunk over the years amongst the best activists of the Italian proletariat.

Among the comrades who intervened were those involved in struggles against redundancies, like Orlando Maviglia of the Motori Minarelli in Bologna, others who have just won a dispute over night shifts, like Edgar Banja of the Danieli plant in Udine, comrades like Diana Terzi who explained the “divide and rule” tactics of the management in the schools, between the temporary casual workers and the so-called “more priviliged” workers with a permanent contract.

The contribution of Mimmo Loffredo, from the FIAT plant in Pomigliano [near naples], was one of the most waited for. Mimmo explained to the audience about the picketing of the factory gates of the plant against overtime work on Saturdays. Paolo Brini, member of the FIOM [metalworkers’ union] Central Committee, declared: “our comrades in the factories are not just union activists, but revolutionary activists in the unions”.

During the two day meeting greetings from all the sections of the IMT were read out, and were received with immense enthusiasm by the audience. The International Marxist Tendency for the comrades of Falcemartello is a lighthouse in a stormy seas.

The third session was on, “Our proposal for a political movement of the working class”. We have been putting forward, since the last congress of the PRC, the need to build a party of the working class. After the debacle of last February’s elections, the debate on “how to rebuild the left” is more relevant than ever.

The political suicide on the part of the Rifondazione Comunista leadership has become clear to everyone after they participated in the “Civil Revolution” electoral coalition and relegated the PRC to all-time low of 1% in every poll. Since 2008 the PRC has had no MPs and this has led to a huge financial crisis for the party. The leadership is sacking most of the full time apparatus and selling off most of the premises around Italy, simply in order to survive.

The strategy of “Left Ecology and Freedom” party [SEL – the right-wing split from the PRC in 2009, led by Vendola] is also in crisis. Before the elections this party was aimed to becoame a partner a colaition government of the country. The SEL, although it did manage to get back into parliament by making a pact with the Democratic Party (PD), was forced into opposition because the PD leadership was forced to abandon the SEL to its own devices in order to form a “governissimo”, a grand coalition, with Berlusconi.

The two centrakl planks onm which the left can be rebuilt must be a class based orientation, with no alliance with the Democratic Party, and a revolutionaruy programme. But no one is proposing this, apart from us.

Alessandro Giardiello, who opened the session, was clear: “we are not launching a new party, nor are we calling for an electoral front. We apply the united front tactic, like the Bolsheviks. When the FIOM leaders pose the question of the lack of political representation of the working class, we reply: “yes, but what are you doing to fill this vacuum?” A new party of the working class will be the product of great historical events, and will not come be the results of ‘voluntarism’ even from the best of activists.”

“We are going to be actively involved in the debates at the next PRC congress, where we will fight to become the alternative leadership, and we aim, on the basis of our platform, to gather all the forces who wish to build the vanguard of the revolution. We are ambitious, and our aim is to conquer the win over the majority of the working class.”

It is impossible to cite all the contributions in this lively and very important debate. But in his summing-up, Claudio Bellotti reasserted the importance of a Marxist leadership, “Without such a leadership, not even one step forward is possible”. His final words were: “We are not going to organise a meeting like this every month, to keep up your spirit. Join our tendency, put it to the test and let’s build together what our class needs most.”

The meeting ended with a roaring applause and the singing of the Internationale and of “Bandiera rossa.”

Our youtube channel with videos of the event can be seen at: http://www.youtube.com/user/festarossa2009