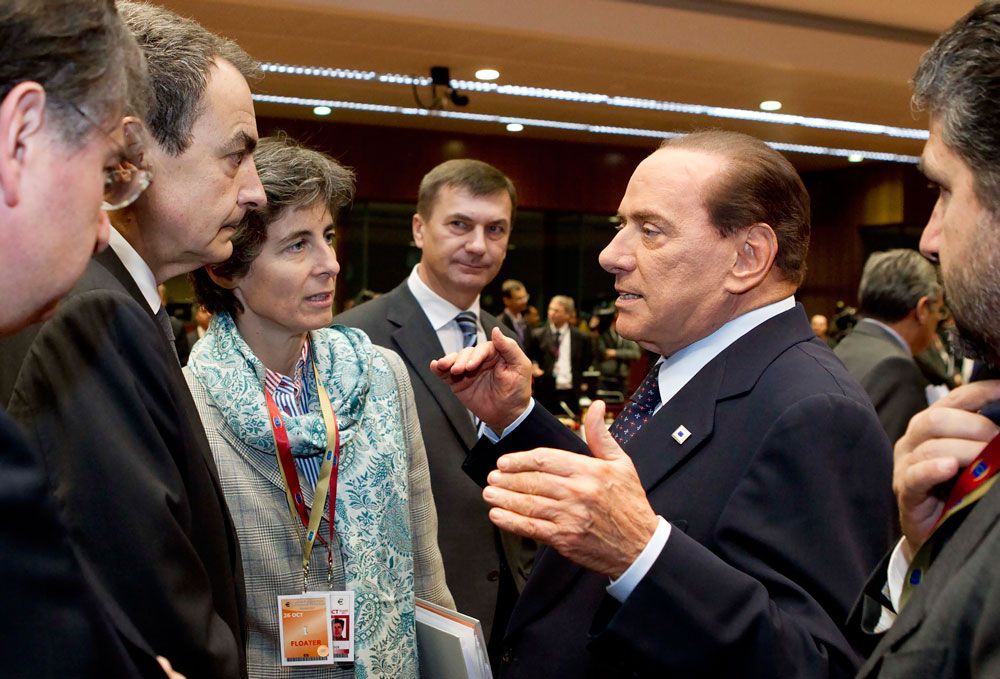 Berlusconi has lost his majority in the lower house of the Italian parliament. Although he won a vote on the latest round of austerity measures included in the budget, he did so with less than half the votes of the MPs in parliament. The result of the vote was 308 in favour, 1 abstention, but with the majority of MPs not voting. This means the budget was approved but now Berlusconi stands naked having lost his parliamentary majority. His days are numbered and the pressure is mounting for him to go.

What is ironic about the Italian political situation is that the so-called opposition – mainly the Democratic Party, a party formed out of a fusion between the bulk of the old Communist Party and a number of bourgeois parties – did not vote on the actual budget. This is sending out a clear message to the bourgeois in Italy and internationally that they are a party that can be trusted to do the job of implementing unprecedented attacks on the living standards of Italian workers in the coming period.

They did not vote against, so as not to delay what they see as “necessary” measures, and also not to bring down Berlusconi today and force immediate elections. The gentlemen leaders of the Democratic Party thus show to their masters, the rich and wealthy inside and outside – mainly outside – Italy, that they are serious “statesmanlike” politicians.

How far the former leaders of the old Communist Party of Italy have travelled! After first becoming openly Social Democratic they finally became all-rounded bourgeois politicians. When Stalin adopted the theory of “socialism in one country” back in the 1920s Trotsky explained that, “It will be the beginning of the degeneration of the Comintern along the lines of social patriotism.” (Trotsky, The Third International After Lenin, 1928). How true those words ring today!

Now in this hour of need the Italian bourgeoisie can turn to these “leaders” to step in and attempt to impose severe austerity on the Italian people, Pier Luigi Bersani, leader of the Democratic Party, addressing the Italian parliament after the vote and made a personal appeal to Berlusconi to stand down. “I ask that, now, you finally accept this situation, hand in your resignation and allow the president to find a solution that will allow our great country to go forward. We will do our part.” They will do their part indeed!

What the leaders of the Democratic Party mean by this is that Berlusconi has proven incapable of carrying out fully and forcefully enough the austerity measures demanded by the “markets”, i.e. the capitalists, because he has his own narrow personal interests that stand in conflict with the interests of the class he is supposed to represent, and therefore the time has come for him to go.

However, it was not just the opposition that did not take part in the vote. Even some of his so-called “allies” defected. Berlusconi’s main ally, the Northern League has asked him to quit. The international money markets are also sending out a clear message. They no longer have confidence – if there was any to begin with – that he can deal with the country's debt crisis.

All this comes at an extremely critical moment for the Italian economy, which is on the brink of a major crisis. Italy’s government borrowing rate is going through the roof. The yield on Italian 10-year bonds today reached the record level of 6.76%, close to the 7% which saw Portugal and Ireland having to accept bailouts. This indicates that after Greece now it is Italy’s turn to be ripped to pieces by the vultures sitting astride the “markets”. The spread between Italian and German 10-year government bond yields is now wider than since 1995.

To give an idea of what a Greek scenario developing in Italy would mean for the European Union and the euro it is sufficient to recall that while the Greek economy represents a mere 2% of the eurozone's GDP, Italy is the third biggest economy in the EU behind Germany and France. As Austria's finance minister recently said, Italy is too big to fail. But it has a public debt of 1.9 trillion euro, equivalent to 120% of its GDP. This means that Italy’s debt is too big to be bailed out by the European Union. With such a huge debt and with the growing lack of confidence in Italy’s ability to pay, the interest keeps going up and up, further increasing the size of the debt as each day passes.

Such is the concern about Italy’s ability to pay its debt at these exorbitant levels of interest, that today Nick Sutton, the editor of BBC Radio 4's “The World at One” programme explained that lenders soon “will not be willing to extend money to Italy at almost any interest rate.”

If anyone has any doubts of what the Democratic Party would do in government it is sufficient to quote Walter Veltroni, one of its key leaders. When asked by La Repubblica today in an interview, what was his model of government for a post-Berlusconi era, his answer was Papandreou, a politician who had proved he was a “statesman” (“un uomo di stato”). Veltroni proposes a transitional government to avoid immediate elections. He says, “Can you see us going to elections with the quarterly IMF check up taking place, with the markets that can set in motion mechanisms based on the debt exposure of the country that would be unbearable? No. Europe expects of us structural reforms, serious measures, a [political] climate that is up to the situation.”

Now, as in Greece, there is talk of finding a national figure, a respected technocrat that would be acceptable to all parties to become the premier. The smell of a “national government” is everywhere, with all parties putting aside their differences for the good of the nation.

Italy, just like Greece, Portugal and Ireland before it, is having to come to terms with the fact that who governs the country is not the elected government, but some unelected officials sitting in the European Central Bank and the International Monetary Fund. Whoever the Italian people elect will be called on to cut pensions, healthcare, education and everything that makes for a minimally civilised existence. This crisis is exposing the real nature of bourgeois democracy: you can vote for whoever you want as long as once in government they carry out the dictates of capital!

However, the bourgeois are going to discover what the Italian working class is capable of. We have seen the series of general strikes in Greece; we have seen the general strikes in Portugal and Spain; we have seen the movements in Ireland. The Italian working class has a great tradition of struggle, from the glorious movement in 1918-20, to the mass anti-fascist movement in the 1940s, to the more recent wave of strikes and occupations that erupted in 1968-69. In the recent period we have seen signs of the growing anger developing among the workers and youth. See our previous articles, Rome: October 15, Italy: September 6 general strike, Italy: Genoa 2001-2011, Half a million march in Rome and the many other articles we have published on the growing militant mood of the Italian workers and youth.

What is being prepared is an almighty clash between a bourgeoisie that is weak, effete and corrupt but which has no other option but to take on the workers, and a working class that is undefeated, with its organisations intact and which is beginning to flex its muscles.

The tragedy of the situation is the organizational weakness of the political organizations of the working class. The old Communist Party has been absorbed into the Democratic Party. Those who refused to go down the road of the Democratic Party created the Partito della Rifondazione Comunista (the Party of Communist Refoundation). Unfortunately, its leaders did not draw all the necessary lessons of the past. As a result of this, the party has on different occasions either supported “centre-left” governments from outside or has actually joined such governments. These were governments that privatized, cut social spending, attacking pensions, education and healthcare.

The price the party paid was that in the last general election it lost every single member of parliament that it had, both in the lower house and in the Senate. This led to a partial rethinking on the part of the leadership at the last party congress, who declared that such coalitions would not be repeated in the future. That, however, was under the pressure of the ranks of the party. And very quickly those same leaders have reverted to type, now seeking some kind of relationship with the Democratic Party. They do not understand that on such a road there is no solution.

This explains why the influence and strength of the Marxist Tendency within the party, gathered around the journal FalceMartello, is getting stronger. The 8th national congress of the party is coming up in December. So far a number of local branch congresses have already been held and the document presented by the Marxists stands at 20% of the votes cast, confirming that they have become the real opposition within the party.

The critical situation the Italian economy is in, with the prospect of intensified class struggle on the agenda, makes it more urgent than ever that the ideas of genuine Marxism become a powerful force within the Italian labour movement.

[Note: we will be following up with further reports on the situation in Italy in the coming days]