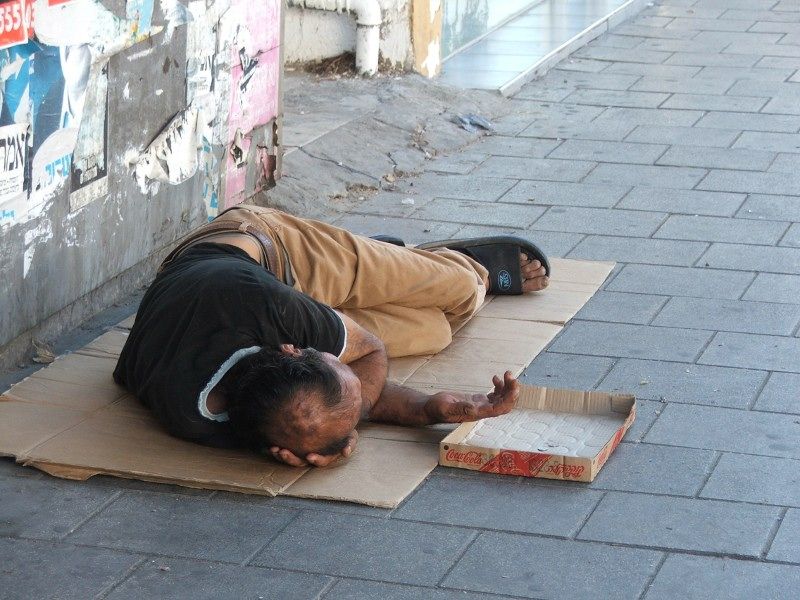 The divide between rich and poor inside Israel is growing more and more. At one end we have multi-millionaires, at the other a growing army of poor. A breaking point is going to be reached at some stage.

The number of millionaires worldwide now stands at 10 million. Together these hold combined assets of over $39 trillion. Of these 10 million 8,419 live in Israel. The definition of a millionaire is someone who has over $1 million in liquid and available assets, not including real estate investments. So having a house worth a few hundred thousand dollars doesn’t count. Still, considering the value of the dollar these days, to be a dollar millionaire doesn’t put you very high up the ranks of the rich. Therefore it is necessary to distinguish between millionaires and multi-millionaires. The definition of a multi-millionaire is someone who has $30 million or more. Here too we see an increase in Israel. In 2008 there were 73 multimillionaires living in the country, but last year that figure had gone up to 83.

So at one end of Israeli society things are looking good. The rich are getting richer! But where are they getting their wealth from? Who is producing it? On this the Israeli News Agency comes to the rescue and provides us with an answer. This is what it has to say about poverty in Israel:

“One Israel child out of three is poor, a poverty report reveals. Every third child in Israel lives below the poverty line, according to an annual National Insurance Institute (NII) poverty report released recently.

“Over 400,000 families in Israel suffer from ‘nutritional insecurity,’ a euphemistic term for ‘hunger.’ 28% of Israeli citizens, or 1,600,000 people are living in poverty. Among them are more than 600,000 hungry children. Those experiencing ‘nutritional insecurity’ eat smaller portions, skip meals and, in extreme cases, don't eat for a whole day. Diets may be high in carbohydrates and lacking or almost devoid of meat, dairy products, vegetables and fruit. In Israel, 22% of families are deemed moderately insecure and 8% suffer from severe insecurity.”

“60% of nutritionally insecure are Jewish, 20% are Arab, and 20% new immigrants. 80% of nutritionally insecure people reported a deterioration in their situation in the last 22 years, as Israel economic conditions have deteriorated. About 24% of Israelis are forced to make choices between food and other expenses such as mortgage, rent, medicine, heating and electricity.” (…)

“The collapse of the economy has taken a great toll on the lives of Israel's poorest families, and many children from middle-class families are now joining their ranks. Unemployment in Israel is around 20%, and the difficult economic situation has taken its toll on huge numbers of Israelis.”

Israel was created, supposedly, to provide safe haven for Jews. The ideology of the state is Zionism, which attempts to bind together all Jews living in Israel across class lines. In the past Israel could boast a booming economy, a developed welfare state and growing living standards. Now we have the spectacle of people going to soup kitchens to survive and old men and women rummaging among the scraps at food markets, looking for something to salvage that they can eat.

This situation is the result of a wider economic crisis of capitalism affecting the whole world. But government policies have also added to the problem. In 2003 a gradual cutting back of child allowances began to be implemented. In 2008 alone these were cut back three times, leading to a situation now where child allowances are around 30% of what they used to be in 2003.

The idea behind this, the same as we see in many countries, such as in Britain, is that benefits need to be cut to get the poor back to work. In some cases that has happened. However, the jobs people have found are often low wage jobs. So the people still remain poor. That explains why so many people have fallen below the poverty line in Israel.

And of course, it helps us to understand how the rich have got richer. By creating a pool of very cheap labour, the profits of the few have gone up. There has been a transfer of wealth from the poorer layers of society to the richer. In Marxist terms, more surplus value is being extracted out of the labour of the working class.

Now it is true that poverty doesn’t strike everyone equally in Israel. If you are an Arab citizen of Israel, i.e. a Palestinian, you get more than your fair share of poverty. According to official figures one-third of all poor families in Israel are Arab, and 60 percent of all Arab children live below the poverty line. However, the figures above indicate that a large section of the Jewish population in Israel is also severely affected by poverty.

These figures confirm what we stated in a recent article, Israeli state’s increasing violence betrays a society in crisis:

“The cross-class alliance on which the Zionist project was based has fallen apart. Modern-day Israel implements the same neoliberal economic policies as the rest of the capitalist world, forcing Jewish workers and pensioners below the poverty line.”

The class divide in Israel is growing, and Israeli capitalism cannot stop that. The rich cannot abolish themselves. It is merely a matter of time before the ordinary working people in Israel start to draw conclusions from all this. Their enemies are not the Arab people – or the Israeli Arabs as some reactionaries inside Israel make out. The enemies of the Jewish workers are the Jewish capitalists.

The growing level of class struggle internationally – see Egypt, see Iran, see Greece – is going to also have an impact on Israel. This is an inescapable process that will sooner or later lead to the rise of bitter class struggle inside Israel.