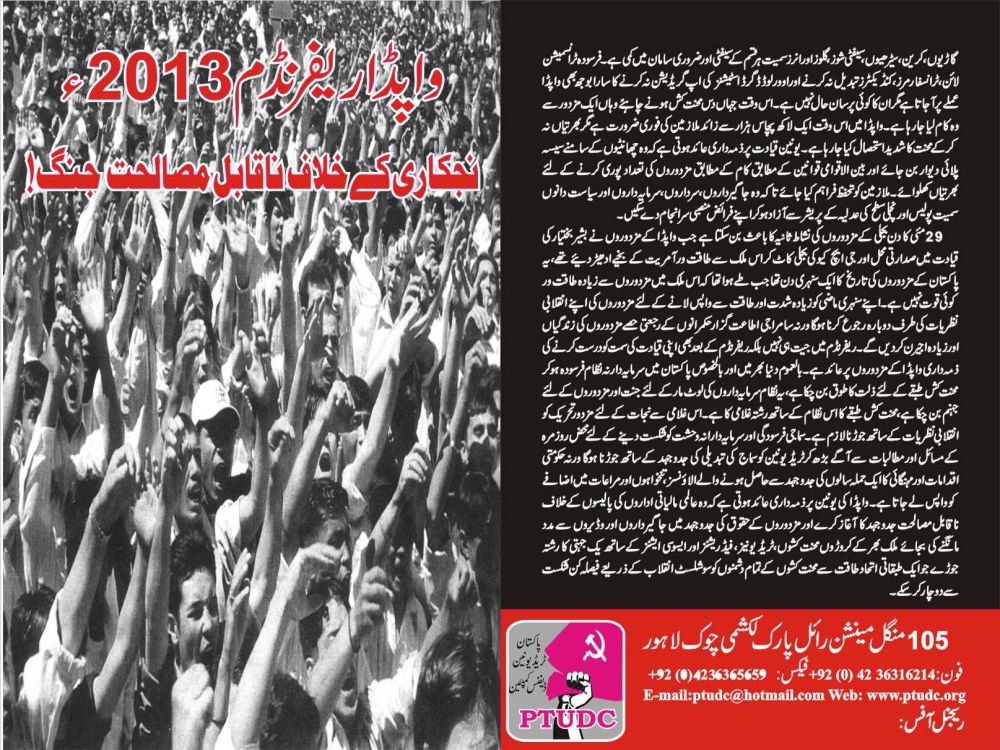 The WAPDA workers union, the largest organized force in Pakistan is have a referendum in two days. The comrades of the PTUDC are intervening in the referendum with a revolutionary programme. Here we provide our readers with the English translation of their main leaflet. WAPDA  - Water & Power Distribution Authority – is a key department in Pakistan, responsible for the generation, transmission and distribution of Power in whole country.

On 29 May, once again, the workers of WAPDA will vote for their representative union. In the last four referendums the workers have voted their traditional union “Hydro” in to victory. This time the referendum comes at a very critical juncture when right wing PML-N has come to power after coming first in the Parliamentary elections. Previously this party has attacked the working class from all sides. They have sold all the assets of the country through savage privatization programmes and thereby caused loss of jobs for millions of workers. Its implementation of section 27-B anti-Trade Union legislation practically destroyed trade unions in the banking sector while they completely banned unionizing in the Railways and other departments.

In WAPDA, where 175,000 workers were employed, the PML-N government completely banned Trade Union activity. They even abolished the national May Day holiday. The new PML-N government is going to be even more vicious than the previous one 14 years ago. An attack on the workers of WAPDA looks imminent as soon as it comes to power. The aim of this new government will be to implement capitalist policies, that is, to privatise WAPDA and other public institutions. This will lead to down-sizing, sackings and casualization of labour. They will try to undermine the unity of the WAPDA workers - A process they have already started by the splitting of WAPDA into eight companies.

Pakistan, which is under imperialist domination, is already facing the ordeal of inefficient private power-producing companies and is facing long power shortages across the country. In these circumstances the rulers will try to use the question of power shortages in order to privatise WAPDA. In the past, the workers of WAPDA have been successful in pressurising their confused and conciliatory leadership into a fight against privatisation. A mood of revolt was seen many places and it was clear that, had leadership had not fought against privatization at that time, it would have lost its authority. The workers of WAPDA defeated this brutal policy of privatisation and became an example to follow for the workers of whole country. But if we look at the history of PML-N and its leader Nawaz Sharif, it is clear that the dictates of imperialism and the crisis of Pakistani Capitalism will lead to a new attempt of imposing privatising on the WAPDA workers. On the eve of this referendum the workers should make it clear to their leadership that they will not tolerate privatisation.

The WAPDA workers must also demand that:

Before the announcement of the referendum a conflict started at WAPDA as a result of a so called ‘constitutional amendment’ when the Paigham union, without the support of workers and voting, was given the status of CBA union. This effectively means that it has been named the official collective bargaining agent on behalf of the workers – without it being voted on by the workers themselves. Due to this change many leaders of the traditional Hydro union joined this new ruling union and became its office bearers. This turncoat attitude is the result of the ideological basis of Hydro union, which used has always said that “workers have nothing to do with politics”. The ideological training is a hallmark of the labour movement in Pakistan and keeps the ranks united in the most austere conditions.

Only the ideas of struggle against capitalism on socialist ideas can give the energy, determination and reason to the struggling workers while the capitalist ideas of “non-political” organisations transforms the unions into a tool through which the state and the capitalists exploit the workers. There are only two kinds of unions – revolutionary Trade Unions and Trade Unions that defend the interests of Capitalists. The workers of WAPDA can bring their leadership back on the right path through renewed struggle. They can rebuild their union to defend the interests for themselves and poor people of Pakistan instead of the interests of the Independent Power Producers.

Partial privatization has already meant the reduction of the work force in WAPDA from 175,000 to between 75,000 and 80,000. Complete privatization will mean more profits for IPPs, increases in the power tariff along with the reduction of the work force. In the last fifteen years hundreds of thousands of new power connections have been established in rural areas but despite that the workforce has been reduced. This has led to more work for those on duty and an increase in accidents, leading to deaths of hundreds of workers who have died due to insufficient safety measures.

Trucks, cranes, ladders, safety shoes, gloves, inners and other safety instruments are not available for the workers of the company. Obsolete transmission lines, transformers, conductors as well as no investment in upgrading grid stations add to the problems. Today one worker is bearing the same work load as ten workers previously. The recruitment of some 150,000 workers is needed, but at the same time ban on recruitment remain. The leadership of the union must come forward to stop any sackings in the department and fight for new recruitment. The workers should be protected against the undue pressures of Feudal lords, capitalists, politicians and the police so that they can perform their duties.

The coming referendum can renew the struggle for the revival of trade unions in Pakistan. Many years ago in 1969, under the leadership of Bashir Bakhtiar, WAPDA workers cut off the power supply to the presidential palace and Army Head Quarters and ended the brutal dictatorship of Ayub Khan. This was a golden day in the history of the Pakistani labour as it became clear that the most powerful force in the country is working class.

The way to revive this legacy is for the workers to go back to revolutionary ideas and wage a revolutionary struggle against Imperialism and their stoogs in the Pakistani ruling class. Capitalism internationally and in Pakistan has raped society and working class is facing the brunt of this with falling living standards. To end this slavery, the labour movement must arm itself with revolutionary ideas and fight against capitalism. Otherwise the attacks of the ruling class will take away all the gains that we have achieved through our fierce battles in the past. The leadership of the WAPDA workers should look towards unity with the workers of other departments, associations and federations rather than looking for help from capitalists, corrupt politicians and landlords. The time is right to untie the working class in order to overthrow capitalism through a socialist revolution. In this struggle the workers of WAPDA can play a key role.