Ireland
Share
Tweet
In spite of all the main parties, big business, the media and even most of the trade union leaders campaigning for a "yes" vote in yesterday's referendum on the Lisbon Treaty, the "No" won the day. This was a slap in the face for the Irish government and the European Union bosses.

Before even the final official results were released today, the Irish Justice Minister Dermot Ahern accepted that the electorate of the Irish Republic had rejected the European Union reform treaty (the Lisbon Treaty as it is known). The "No" vote had won in the great majority of Ireland's 43 electoral constituencies. The pro-treaty "Yes" vote was ahead in only a small number, and none of these were outside the capital, Dublin. 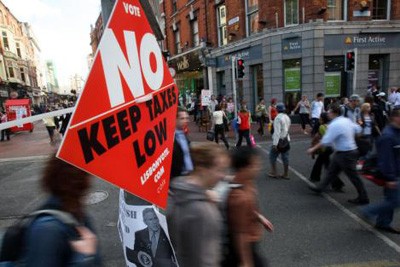 This comes as a slap in the face for the Irish government and the new Prime Minister, Brian Cowen. It also puts a spanner in the works for the top officials of the European Union and their clearly anti-working class policies and outlook.

So far, fourteen member states have ratified the Lisbon Treaty in their national parliaments and if the "yes" vote had got a majority in Ireland it would have been due to come into force on January 1 of next year. The result now places huge doubts over the future of the Treaty that was designed to achieve greater European integration. How concerned the bourgeois of Europe and beyond are is seen by the fact as soon as the first report of the "No" victory started coming out the Euro fell to its lowest level against the dollar in over a month.

What is amazing is that the three main political parties in the Republic all campaigned strongly for a "Yes" vote. Farmers groups, big business and many trade unions also backed the "Yes" campaign. Even the Pope intervened, calling on the Irish electorate to back the "Yes"!

What this vote reflects is a changing mood in Ireland. Until not so long ago the Republic was described as a Celtic Tiger, i.e. a newly developing boom economy. Those days are long gone. (See Gerry Ruddy's article, Ireland: It's the Economy!) House prices have fallen, according to some figures, by 8.9% over the past year, while mortgage rates have been rising. Between 2002 and 2006 the economy was growing by an average 5% annually. The latest forecasts are that early this year this had slown to around 2%, but it could slow further as the Irish economy is heavily dependent on exports both to the USA and the rest of the European Union. The latest figure for inflation is that it now stands at 4.3% and is rising.

Ireland initially attracted investment on the basis that it provided relatively cheap labour while being a part of the EU from where multinational corporations could easily export to the rest of Europe. Foreign investment was attracted also by loosening corporate taxation. In fact Ireland has had some of the lowest taxes on corporations in the EU.

Recently, however, the French government announced that its incoming EU president would seek a harmonising of business taxes. What this means is that as the world economy slides into recession every capitalist power is looking at its own interests and cannot tolerate any "unfair" trading conditions. This contradiction is already being felt within the European Union itself, where each country is looking to its own interests.

The Irish government regarded the French announcement as "untimely", by which it meant that such statements should have waited until after the June 12 referendum. Other officials in the EU had in fact behaved differently. In recent months there has been very little talk about concrete policy-making. In March the EU held its latest summit. Commentators made the point that it was their least eventful meeting in recent times, as hardly any concrete proposals were actually discussed. Why raise real proposals when people are about to vote? Let them vote first, and then tell them what you have in store for them!

However, on June 19 the next summit will be held. At that gathering all the issues that had been kept on hold will be on the table, from climate change to biofeuls, from rising food prices to CO2 emissions and also on the controversial issue of the role of the new European president envisaged by the Lisbon Treaty. There are also plans to increase the EU's defence budget as well as proposals to review how they allocate the budget. The overall defence spending is expected to reach 134 billion euros ($211billion) next year. Ireland is a "neutral" country and spending on defence was one of the issues that contributed to the defeat in the 2001 referendum on the Nice Treaty. There are also plans to cut subsidies on agriculture, something which would affect Ireland seriously. Again these plans were put on the back burner as they waited for the Irish referendum to take place.

It seems a world summit may be called in Geneva this month, where there will be a lot of talk about cutting agricultural subsidies. EU officials pushed for such a summit to be postponed until after the Irish referendum. Again, why upset Irish farmers by announcing what you are really going to do!

We are told that the EU promotes democracy. One of the excuses that are used by some EU member countries to reject Turkish membership is that Turkey is not fully democratic, at least according to bourgeois democratic standards. But this is a bit like the pot calling the kettle black. Of the 27 member countries, Ireland was the only country to have organised a referendum on the Lisbon Treaty, and that is because its Constitution requires it to do so. All the others have avoided referendums like the plague. Maybe in Ireland one day they will call a referendum to change the Irish constitution!

In 2005 both the French and Dutch electorate rejected a previous attempt at establishing a European constitution. The present Lisbon Treaty is in fact a rehashed version of the previously rejected draft constitution. In Ireland the electorate already voted down the Nice treaty in 2001, but then the government called a second referendum in October 2002 in which they managed to get a "Yes" vote. The bourgeois just keep on organising elections until they get the desired result.

Some cynics have stated that this vote doesn't count, as they'll simply call another referendum in a few months' time. This time, however, it seems the Irish government would find it difficult to justify a re-run. As The Economist reported (May 8th 2008):

Thus a small nation of 4.2 million (with an electorate of just over 3 million) may decide the fate of the latest attempt to achieve some kind of EU-wide Constitution. Had the citizens of other EU countries (almost 500 million of them) been allowed to vote most likely many of them would have voted in a similar manner.

What the vote reveals is an instinctive mistrust of the European Union bureaucracy and what it stands for. We should not forget that the European Union has been used as an excuse, in all countries that make it up, for draconian anti-working policies over a period of decades. Let us not forget the Maastricht Treaty with its stringent conditions on public spending, which were used to justify cuts in pensions, social welfare and so on. Everything was done with the excuse that "this is necessary if we want to be a part of Europe".

So long as the economy was booming workers could, to a degree, tolerate these attacks on their living standards. After all, there were jobs. Yes, jobs with worsening conditions and longer hours, but there was an outlet. Now unemployment is growing, inflation is on the up and workers across Europe are feeling the pinch. And Ireland is no exception.

In this vote we see a rejection of the policies of the present three-party Irish coalition government. Before the previous Prime Minister, Bertie Ahern, resigned there was concern that the electorate might use the referendum to cast a vote of no confidence in him. With Ahern gone they thought this problem had been removed. They ignore the fact that working people in Ireland can see that the new Prime Minister stands for the same things. It is against policy that the electorate has voted, not individuals.

The vote was also a rejection of the big business interests that lie behind the European Union. It is also an indication that things are going to be different in Ireland from now on. The level of strikes has gone up, with some very militant struggles in the recent period. The Trade Union leaders campaigned for a "Yes" vote but failed to convince the workers. In the coming period they will also fail to hold back the tide of militancy.

This was not just one little referendum in a small corner of Europe. It is the tip of an iceberg of a much bigger picture, one of growing instability across Europe and one of growing polarisation between the classes, where the workers and the capitalists are moving in opposite directions.