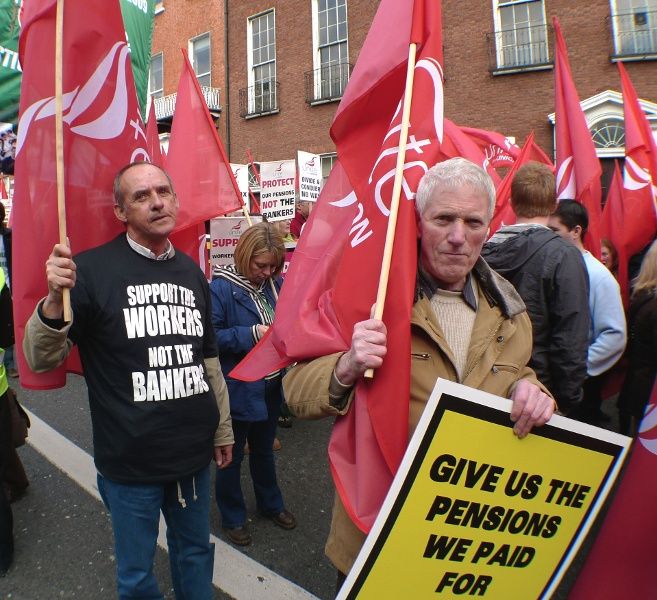 The ICTU leaders recently consulted their members over the “Public Service Agreement”. Most of the public sector unions have been rejecting the deal, which reveals that the workers are prepared to fight. But are the leaders up to the task?

When the ICTU leaders agreed to take the “Public Service Agreement” back to their members, it must have been with a certain sense of trepidation. After all, given that the Irish public sector workers have demonstrated time and time again their readiness to demonstrate, work to rule, stop answering the phones, strike and stand up to daily assaults in the bourgeois press, anything less than serious progress was bound to go down badly.

The response from the various trade unions over the last few days to the proposals is very significant. Two of the three teachers’ organisations the TUI and ASTI voted to recommend rejection, while the INTO vote to recommend acceptance went through by only 4 votes, 308 to 304, with the Executive recommending acceptance while Mary Harney, An Tánaiste and new Education Minister virtually fled the building. The Civil and Public Services Union is likely to reject the deal, while IMPACT and UNITE will be balloting with a recommendation to oppose. The situation in SIPTU is a bit more complicated, but the pressure from below is there as well.

After a long process of talks about talks and ballot after ballot, it has to be said that the average Irish worker now has a fairly clear view on levies, wage cuts, NAMA, the banks, an Bord snip and the present coalition government. The public sector workers have been presented with a very poor offer though. In return for not being kicked we can vote to be stretched on the rack. More pressure for no pay cuts… but by the way, we might come back for more also.

Procrustes was the character in the Greek Myths who offered his guests a bed for the night, but then went on to stretch them if they were too short for his bed or cut their legs off if they were to tall. Now your man Brian Cowan wants to do both at the same time. How could the trade union leadership present this proposal as a deal?

The only possible answer is that the ICTU negotiators have accepted hook, line and sinker the arguments of the bosses and the government that there is no alternative to a savage austerity programme. But that begs the question: who are the trade union leaders there to represent? The British Labour leaders in the 1980’s advocated that the public sector workers should adopt a “dented shield” policy in the light of Tory attacks on the working class. The clear message to the Tories was that there would be no support forthcoming and that they could stick the boot in.

There is a well known episode of Father Ted where Ted accidentally dents a brand new car that is due to be the top prize in a competition. He then completely destroys the car by trying to beat out the dents. As far as we are aware this was never intended as a strategy to be followed by the leadership of the organised working class in Ireland, or anywhere else for that matter. But at every stage the ICTU negotiators have achieved the opposite of what the members expect.

At the same time the Irish workers have been faced with a succession of attacks, one after the other, all foisted on us by a government that only has one strategy that is to make us pay for the bosses’ crisis. We live in a world of cause and effect; things don’t happen by magic or through acts of God. This crisis is a consequence of the greed and parasitic nature of the bosses, in the boardrooms of Dublin, London and New York. It’s the logic of the capitalist system that creates booms and slumps, but it’s the naked self interest of the bosses that tries to make us pay for it.

This is precisely what happened in December when the government laughed the ICTU leaders out of the door at Leinster House after they foolishly called off strike action, presumably as a sign of “good will”. Now the Public Service Agreement has been conjured up. But the flipside of the current situation is that it is likely to be the workers that throw the deal out. Experienced trade unionists understand that in so called “normal times” wages are a regular issue in the movement and sometimes there is a pay battle sometimes not; but working conditions are a completely different matter. Wage cuts and slashing our terms and conditions is a recipe for an explosion.

The trade union leaders doubtlessly would prefer an easy life, the members aren’t going to go away and to paraphrase Berthold Brecht, they can hardly abolish the membership and elect another. It’s possible that the latest round of ballots will lead to generalised action once again. The key task for the next period will be to make that action count. But at the same time we need to take a long term view and begin to transform the unions, encourage new young workers who have become active over the next period and build a fighting and democratic trade union movement with as leadership worthy of the name.

It is no wonder therefore that the Taoiseach has attempted to appeal over the top of the trade union leaders heads to the membership. However, it’s likely his pleas will fall on deaf ears. The reason is quite clear. We have no choice but to fight back.