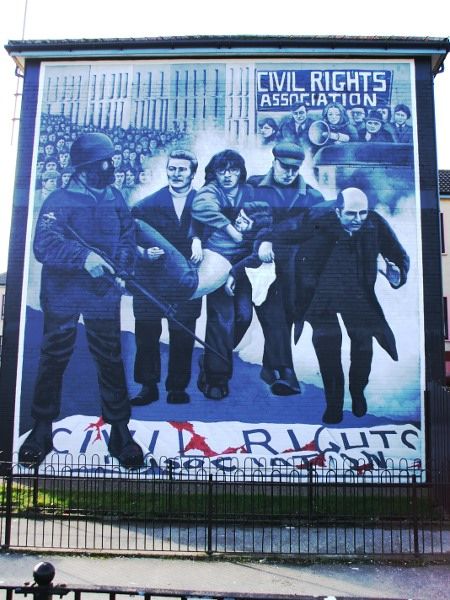 The strategy of British imperialism in the north of Ireland has changed; the emphasis has been to reach some sort of “truth and reconciliation”. That explains why 38 years on the Saville report has declared the victims to be innocent. But today the contradictions in the north are increasing and the cul-de-sac of the Stormont assembly represents no solution for workers from either a catholic or protestant background.

Some 38 years after the horrific events in Derry on Sunday 30th January 1972 the publication of the Saville Report has been welcomed by the bereaved families whose 14 relatives were killed by British Paratroopers at a Civil Rights March on what became known as Bloody Sunday. The report’s findings have been greeted enthusiastically by the majority of the catholic population. The main findings of the 5,000 page report are very clear:

Saville states that the British paratroopers "lost control", fatally shooting fleeing civilians and those who tried to aid the civilians who had been shot by the British soldiers. In addition the Paratroopers concocted lies to cover up their actions. No warnings were given.

The findings of the report even drew the new Tory Prime minister to apologise in the British House of Commons as the BBC reported on 15/6/10:

The Saville Report stands in complete contradiction to the frame up Widgery Report of 1972 that placed the blame for the massacre on the organisers of the Civil Rights March themselves. But while the report demonstrates blow by blow and shot by shot the events of the day, it is very unlikely that anyone will be brought to trial for the killings.

The inquiry cost some £195 million to produce and goes into great detail. But it has to be said that much of the evidence has been available since January 1972, and the publication of the report perhaps says more about the strategy of the British government during the “peace process” than it does about any conclusions that the British State are likely to draw from the report. The Widgery report represented a huge problem for the Blair government as workers in Derry knew the reality of what happened.

The events of Bloody Sunday illustrated the attitude of the British State at the time and the crazy strategy of the military. The period following the Bloody Sunday events saw a polarisation and the escalation of the armed struggle. There was no chance whatsoever of a truthful report being prepared under those circumstances. Now, the strategy has changed, the emphasis has been to reach some sort of “truth and reconciliation”. But the contradictions in the north are increasing and the cul-de-sac of the Stormont assembly represents no solution for workers from either a catholic or protestant background.

There is a huge vacuum in the north which only the working class, united around a socialist programme can fill. Capitalism can only serve to exacerbate the contradictions and the divisions. That is why we stand for a united socialist Ireland linked in a voluntary Socialist federation to a Socialist Britain.

These reports from the Militant on the 4th February 1972 are firsthand accounts of the Bloody Sunday events. Thousands of workers and young people would have similar stories to tell:

“I was in Chamberlain Street when the paras attacked. The crowd retreated in panic and I ran into the courtyard at the back of Rossville Flats, but I stopped when I saw we had been outflanked by soldiers who had taken up positions at the corner of the flats. Most people dashed across the courtyard and I turned left and followed several others behind a wire fence. I heard bangs which I thought were rubber bullets, but then I saw an unarmed man fall in the middle of the yard and lie motionless. Suddenly I realised it was gunfire. I dived behind a wall. I looked up and saw a para who fired his rifle and hit a youth who was only 12 feet away from me. Someone shouted ‘Look, he’s been wounded’ and we rushed over and carried him to the other side of the block and he was shot down by a British soldier as he ran for cover.”

Paul Jones another Militant supporter in Derry, also managed to get a number of eye-witness accounts of actual shootings.

“William McKinney, aged 27, was shot dead by troops, when Mrs Collins went to help him, she was told to leave him alone by a paratrooper. When she persisted she was hit on the head with a rifle. Later, when she was able to reach the boy, along with ‘Knights of Malta’ and Mckinney’s mate, Mckinney was dead. Mrs Collins says that she neither saw nor heard nail bombs or shooting before the paras opened up.

“Mrs Friel saw unarmed Bernard McGuigan, aged 41 run around the corner of Rossville High flats, out of the way of the paras. She then saw half of his head blown off by the advancing paras. She also saw Patrick Doherty, 21 crawl out from behind cover to help an old man who was wounded and was the n shot dead himself and left to die unattended. James Rea say the residents of the maisonettes opposite Rossville flats, was sheltering for cover already wounded in the arm when paratroopers approached him. “Don’t shoot, I haven’t a gun” he shouted. The paratroopers then demanded that he surrender, which he did and then he was shot dead.”

Our correspondents have seen bullet holes three inches across and two inches deep in the concrete walls where he was shot. All eye witnesses deny that any of the dead men were carrying guns or nail bombs as the army has alleged.