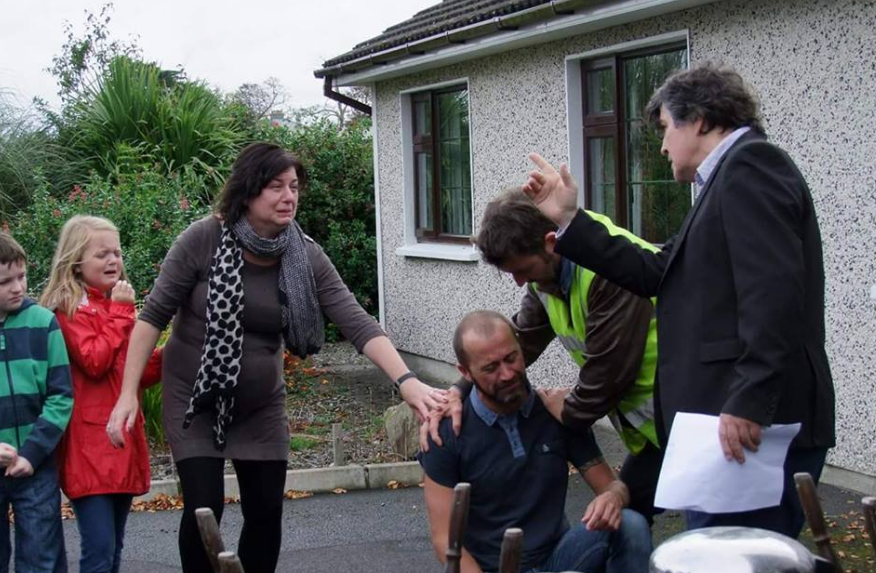 On 11 December, two weeks before Christmas, three middle-aged siblings – Anthony, David and Geraldine McGann – were brutally kicked out of the home that they shared on a farm in Co Roscommon, Ireland. The three were injured, as they were dragged by their ears and hair. Their assailants – a group of 20 private security personnel led by an ex-member of the British Army’s Ulster Defence Regiment – were executing an eviction order on behalf of KBC Bank. While this assault took place, the gardaí (Ireland’s police force) merely looked on.

The scene was not an unusual one in Ireland today. But unlike many similar evictions in the recent period, this was videoed and uploaded onto social media, where it caused outrage, becoming emblematic of the way thousands of families have been brutalised in the interests of the big banks.

The response on social media was overwhelmingly one of revulsion. The behaviour of the security guards has been likened – not unfairly – to that of the “Black and Tans” of the British Army a century ago. Renowned for their atrocities against peasants and workers, the Black and Tans – brainchild of Winston Churchill – were British WWI veterans who were unable to reintegrate into society and were deployed in Ireland during the War of Independence. An Garda Síochána (the police or “guardians of the peace”), far from guarding the peace, did nothing to intervene. But above all, outrage has been directed against the big banks, like KBC and the “vulture funds” that are responsible for this and thousands of other evictions.

Within a week, on 16 December, the bailiffs that remained at the property were subject to retaliation. Dozens of masked locals armed with baseball bats ejected the men and burnt out four of their cars and two vans. A day later, the McGann family returned home.

In the days immediately following these events there was an outpouring of anger on social media at the bailiffs. The vigilantes were seen – if anything – to have given the bailiffs a little taste of their own medicine!

Such has been the sensation that the eviction and its reversal caused that the events have provoked a range of other actions against KBC Bank, ranging from peaceful protests at the KBC HQ to vandalism and arson. A week later, on 23 December, the village of Strokestown witnessed a huge demonstration of 1,500 (a number far bigger than the number of residents of the town!) in support of the rights of the newly returned family.

The anger at the protest was directed not only at the big banks but at the coalition government of Fine Gael and Fianna Fail. This government, consisting itself in large part of landlords and capitalists (36 percent of Fine Gael politicians are landlords), is directly responsible for such violent scenes as those seen in Roscommon.

Meanwhile, the government and bosses’ press, although lamenting the “unfortunate” eviction of a family two weeks before Christmas, screamed with holy horror at the subsequent events. The Independent even claimed it could see the shadowy hand of “dissidents” behind the events of 16 December. This claim was made without evidence, of course, and was aimed at legitimising one form of violence (that of the banks and the bailiffs) and de-legitimising the actions of those who reversed the eviction.

The Taoiseach [Irish Prime Minister], Leo Varadkar roared like a lion against “very highly organised, highly violent vigilante attack.” Meanwhile, when speaking of the behaviour of the courts, the police and the “vulture funds” – a term the Taoiseach doesn’t very much like for its lack of political correctness – he purred like a kitten.

Echoing Varadkar, Justice Minister Charlie Flanagan fulminated against violence by vigilantes, which “cannot and will not be tolerated in this State.” Of course, this stands in stark contrast to the government’s silence on the violence of bailiffs and banks’ agents, which is not only tolerated but actively assisted.

The context of these evictions is the burgeoning housing crisis in Ireland.

Like tens of thousands of others, the McGann family got into trouble after the 2008 crisis. Their mortgage was initially taken out in 2004 with the predecessor to KBC Bank, but by 2009 they found themselves in arrears and unable to keep up repayments. Their mortgage joined tens of thousands of others in the category of “Non-Performing Loans” (NPLs) on the books of Ireland’s biggest banks.

When the crisis hit, the banks – with huge amounts of bad debt hanging around their necks – came begging to the state and received €64 billion in bailouts. This hasn’t permanently solved their problems however and to this day huge numbers of NPLs clog up the Irish banking sector. It is estimated that 14 percent of loans on the books of Irish banks today are categorised as “non-performing”. This compares with a European average of 4 percent. 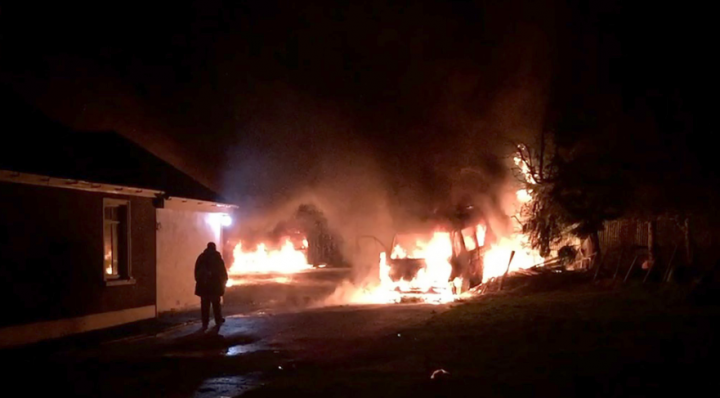 Upward of 100,000 people could be at risk of being turfed out of their homes in the interests of the capitalist class. But as the events in Roscommon have shown – the capitalists and landlords can expect fierce resistance / Image: fair use

Under the scenario of a new worldwide recession, this huge quantity of bad debt could drag down Irish banks. Every day, new evidence illustrates that the world is at the cusp of a new downturn: from the gyrations of the stock market; to the collapse of emerging economies; to the re-emergence of the Eurozone crisis.

The Irish capitalist class is in a race against time to try and get its system fighting fit to take on the huge shocks that are coming. For this reason, the Irish government and the European Central Bank (ECB) are pushing the banks to clear their bad debts by whatever means necessary. This means principally selling “bad loans” to “vulture funds” (American organisations like Goldman Sachs), which then evict families and recoup what they can.

In other words: indebted working and middle-class residents are to be made to pay for the last crisis just so that the capitalists can ready itself for a new crisis! There is little more to be said in condemnation of a system that can only perpetuate itself by the perpetuation of human misery. There are as many as 28,000 main residences in arrears of more than 720 days. Each of these residences may have as many as four residents – that means that upward of 100,000 could be at risk of being turfed out of their homes in the interests of the capitalist class.

But as the events in Roscommon have shown – the capitalists and landlords can expect fierce resistance.

For a Socialist Republic

At the same time as the banks are turfing out indebted homeowners, rents in cities like Dublin are spiralling out of control. Rents in Ireland today are 34 percent higher than they were at the peak of the housing bubble in 2008; and rents in Dublin are an incredible 73 percent higher than just six years ago. In Dublin in September, the banks’ thugs again made headlines by violently expelling peaceful protesters occupying empty buildings.

Again, there were comparisons with the behaviour of the “Black and Tans”. The question was raised of a return to the revolutionary class struggle methods, which are part of the Irish working class’ tradition in fighting rack-renting landlords.

In the Land War of the 1880s, hundreds of thousands of tenant farmers stood up successfully against English absentee landlords. Today the class enemy has changed little: instead of the English landlord; it’s Irish banks, American “vulture funds” and the ECB. Instead of the Royal Irish Constabulary and Black and Tans, we have private goons protected by the gardaí.

In the 1880s, the organisation of the whole of the rural poor in the Land League was an unbreakable phalanx against the landlord class. Its mass character gave its tactics (boycotts, rent strikes and physical resistance of evictions) an unstoppable character capable of confounding the British state. Today, a mass campaign under working-class leadership could once again bring the bosses’ and landlords’ to their knees and turn the eviction orders of the courts into mere scraps of paper.

Sinn Féin, as the main opposition in the Dáil (Irish parliament) has positioned itself as the champion of “family homes and renters” in the midst of the housing crisis. The party has been particularly prominent on housing protests across the country. MP Ó Laoghaire even made a call for “a broad coalition of ordinary people and communities to defeat the alliance of bankers, landlords, and the political establishment.” This is militant talk and the slogan is a correct one. But it begs the question: how can Sinn Féin simultaneously claim to want to fight the bankers, landlords and the political establishment, when just yesterday they were exploring the grounds for a coalition with Fine Gael? As the bible says, “No one can serve two masters. You cannot serve both God and Mammon.”

Returning to the lessons of the Land War of the 1880s: the movement was ultimately scuppered. But it was not for a lack of fighting spirit on the part of the tenant farmers and labourers. Rather Parnell and the middle-class leaders were convinced to drop the methods of class struggle and to play the parliamentary games of the British. It was a trap that led a revolutionary opportunity to be missed.

Sinn Féin has rightly denounced the excesses of the ruling class and its representatives in the “golden circle” at the head of the government. But it is impossible to fight landlordism and capitalism whilst striving for “respectability” and a place in the same “golden circle”. Rather a mass campaign against evictions must be linked to other workers’ struggles into a revolutionary movement for the overthrow of the rotten bosses’ Republic. Only a Socialist Republic – where the land, banks, construction companies, and other monopolies are nationalised and serve the interests of the public – can guarantee the right to a home, a job and a decent life.