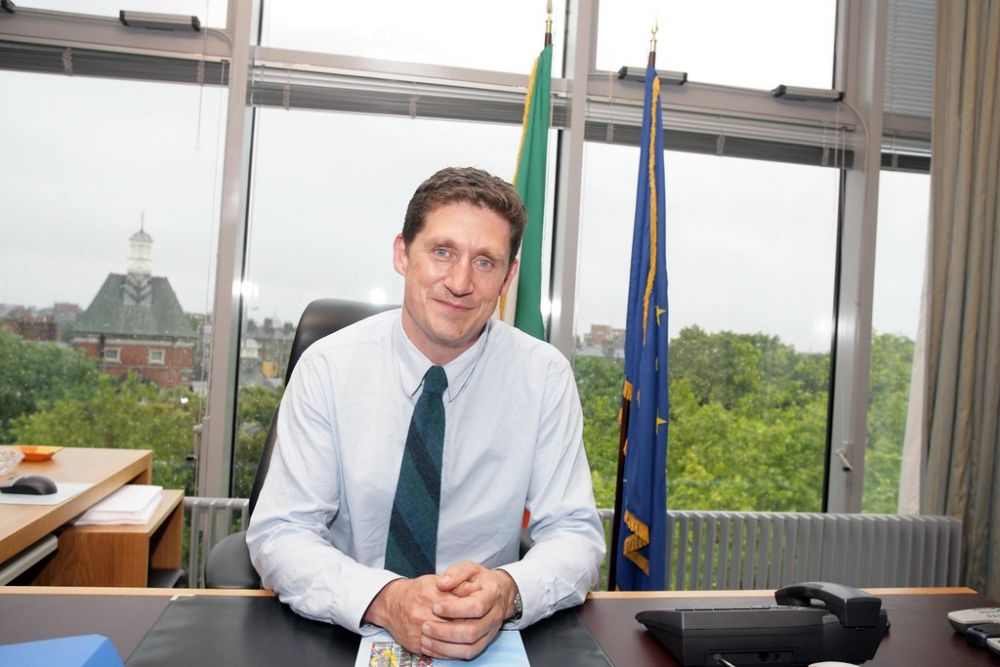 This year has been an extraordinary one in Irish politics. The dominant political parties – Fianna Fáil and Fine Gael – were dealt a terrible blow in February’s election, so much so that the parties which could once command 80 percent in the polls have been reduced to a combined first-preference vote of 43 percent. The prevailing mood of the election was a demand for change and an end to their duopoly on power. Among the many parties calling for “change” in the election were the Green Party. However, in a craven move, the leadership of the Greens have now negotiated a ‘Programme for Government’ with Fianna Fáil and Fine Gael.

The Irish bourgeois political leaders have pulled out all the stops to secure this agreement. So desperate were they to seal the deal they stooped to the level of undisguised horse-trading, bribing councillors by promising an €8,000 pay rise as part of the deal.

It didn’t stop there – in order to try and sell it to their supporters, the Green Party spin doctors enlisted none other than Mark Ruffalo, the actor who played the Incredible Hulk, to talk up the positives of the deal in a webinar! The actor talked about the need for cool heads, to channel environmentalism into safe channels and gradual change during a climate catastrophe which already promises irrevocable damage to the environment: “Don’t fret about getting everything you want at the moment,” the actor soothingly counselled, “This is a movement. This is a long journey forward. Any win is a win for us in the long term. Calm down. Do what’s right for right now.”

It’s an ironic comment on the desperation of Irish ruling class that they have to rope in the Incredible Hulk himself to counsel calm! The three parties know how unpopular this stitch up is. A majority of people want fundamental change. One recent online poll found that an extraordinary 9 out of 10 people would rather have another election than the current coalition government.

Government of the bosses

A minority of Green Party activists, and many more Green Party voters, weren’t fooled by these pathetic attempts to win backing for the deal. Party members like Saoirse McHugh condemned the ‘Programme for Government’ as “greener business than usual” that won’t offer “deep, transformative change”. Indeed, the last time the Green Party went into coalition with Fianna Fáil in 2007, they signed off on a crippling EU-IMF bailout package and supported setting up new Shell gas refineries!

Punished for their participation in that government, the Greens made their big comeback in February after more than a decade in the wilderness. This vote came largely from young environmental activists emboldened by the Fridays for Future strikes. This layer of youth didn’t vote for a repeat of 2007 when the Green Party was an adjunct to Fianna Fáil’s austerity government.

The leaders of the Greens like Eamon Ryan were really always just “Fine Gael on bikes” despite their empty words about “change”. Carbon taxes which will penalise workers for climate change are part of the ‘Programme for Government’, and no doubt we will see the return of water charges as a pseudo-environmental policy. These are policies that the Young Greens in particular have explicitly rejected. 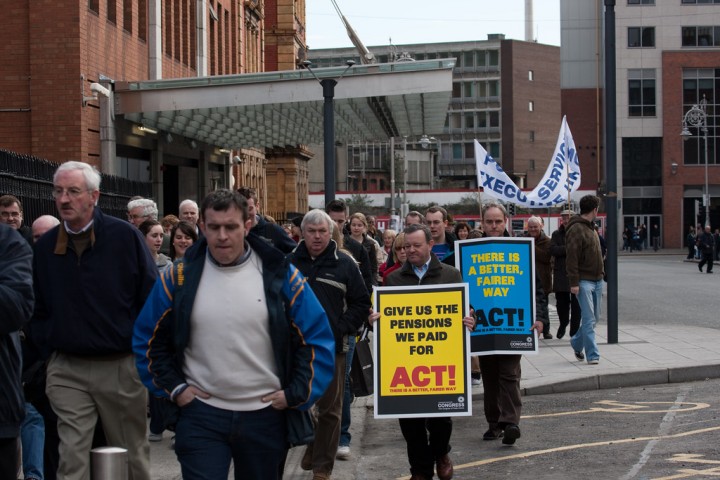 The Irish Congress of Trade Unions (ICTU) were quick to welcome the new government agreement, but the unions won’t get a look in with this government of the bosses / Image: ICTU, Flickr

The new agreement runs to 126 pages and, despite its length, does nothing to address the burning injustices that led to the political earthquake in February. Its promise of 50,000 houses falls far short of the 100,000 houses that Sinn Féin and other parties were calling for and it makes no mention of reversing the unjust two-tier pay system and other austerity measures. All the talk of ending austerity is just hot air.

Despite this, the Irish Congress of Trade Unions (ICTU) were quick to welcome the new government agreement. Talking in the terms of Social Partnership, they spoke of “working with” the government to implement the ICTU’s “No Going Back” document in response to the COVID-19 crisis. In reality, the unions won’t get a look in with this government of the bosses.

Although the government has made allusions to increasing state intervention somewhat, this will do nothing to shield against the unprecedented economic maelstrom triggered by the coronavirus. On top of a chronic housing crisis, unemployment now stands at an astonishing 28.2 percent. Unemployment among young people stands at an astronomical 50 percent.

The same young people who have faced 10 years of brutal FG austerity and who voted for the the Greens in the hope of change aren’t going to be bought by a few paltry concessions on the environment and a webinar by a movie star when they’re out of work and can’t get a house. By propping up this pro-capitalist government, the Greens have sawn away the branch they were sitting on. The support they temporarily garnered from the youth will now rapidly drain away.

An end to austerity?

There is a misconception, not only in Ireland but in Britain and other countries, that the sudden willingness of the capitalist parties to spend represents an ideological shift away from austerity and that the left have somehow “won the argument” on government spending. This is incorrect. The various coronavirus schemes introduced in Ireland and elsewhere have not been taken to “help out the little guy”. The massive intervention of the state was an act to save capitalism from economic catastrophe. Just as governments bailed out the banks in 2007, so they have borrowed in order to try and prop up collapsing capitalism in 2020.

This will mean a massive state deficit. The civil service predicts this could reach €30 billion in Ireland. The Irish government is already predicted to spend €1.60 for every €1 it raises in tax revenue. This is piled on the huge debts it has accrued during the financial crisis, amounting to €40,000 for every man, woman and child. The ‘Programme for Government’ plan to increase spending is predicated on the idea that there will be a decrease in borrowing when growth returns. This is based on the fairytale of a “V-shaped” recovery. When the growth doesn’t come, austerity will follow.

This new government has to pay lip service to the idea of increasing investment and avoiding a return to austerity. The punishment of the recent election is all too fresh in their minds. But the remarks of the new Minister for Public Expenditure, Michael McGrath, are enlightening:

“So the focus is on repairing the economy, the focus is not on cuts but no one can guarantee that there won’t be difficult decisions to be made but I do not envisage a situation where we will be cutting services and current spending”.

McGrath wants to use state spending to provide the demand to “grow” the economy so that public debt shrinks as a proportion of GDP and austerity becomes unnecessary. This is a return to classic Keynesian policies. No amount of state aid from Leo Varadkar and Micheal Martin will hold off the inevitable crisis however. In agriculture, fertiliser can go a long way to make crops grow, but when soil degradation takes effect a tonne of fertilizer will do no more than an ounce.

The bitter truth is that the conditions don’t exist for a “V-shaped” recovery. The rushed return to work raises the possibility of a second wave. Meanwhile, no amount of propping up demand nationally can solve the dire economic conditions globally. As demand has collapsed, supply chains have been disrupted and workers laid off, the stage is set for a protracted and worldwide slump that will drag Ireland in its wake. To this must be added the possibility of a no-deal Brexit, renewed trade wars and countless other shocks, which will batter Irish capitalism.

The talk of ending austerity is like a spoonful of sugar to make the new government more palatable. But cuts will likely come, no matter what fairytale is spun by Leinster House. State intervention comes now, but when the boom doesn’t materialise, it will be time for someone to pay the piper. This government will endeavour to make workers pay.

Watch our interview with Paul Murphy (TD) in April

Grovelling before government ministers won’t achieve anything in this period, whatever the illusions of the trade unions. In the next period there is a real possibility of a challenge to the Fianna Fáil-Fine Gael duopoly. Instead of cosying up to these backward forces, the trade union leaders must lead the fight in the coming weeks and months to defend the jobs, pay and livelihoods of workers across Ireland, which are facing the axe. The extent of the crisis is going to force hundreds of thousands of workers to organise to defend themselves. If the union leaders fail to take up this fight they must be replaced.

The weakness of this government is such that if the working class of Ireland was armed with a fighting leadership, a campaign of defensive struggles could easily turn into a victorious offensive struggle to break this government. This is by far the weakest government in the history of the Irish Free State. A campaign must now be waged to force new elections, and to sweep aside the two party system. But that requires that the working class of Ireland must forge a genuine party of its own, which the trade unions must come together with the left parties to form.