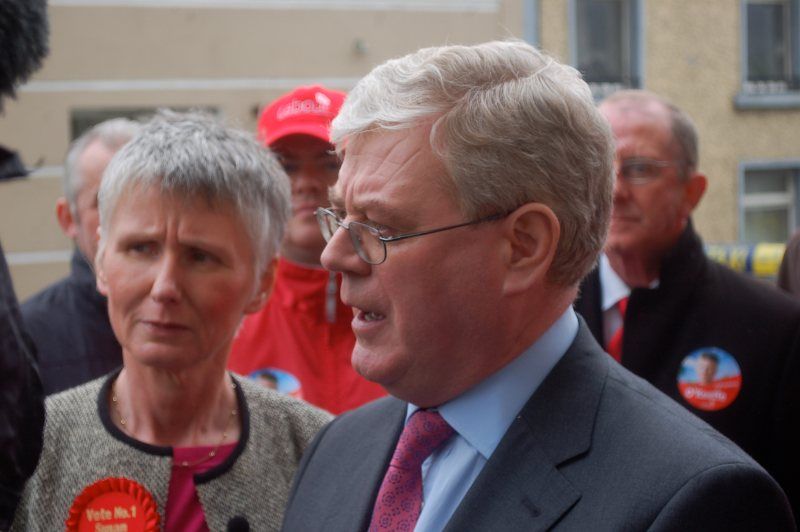 Friday's election saw Labour gain the most votes and seats in its history. But Fine Gael came out as the largest party. Eamon Gilmore and Enda Kenny have established negotiating teams to prepare the way for a coalition government. While Labour's leaders have given the negotiations the go ahead any final decision must be made by the party conference which meets on Sunday. Fightback is wholly opposed to such a deal. 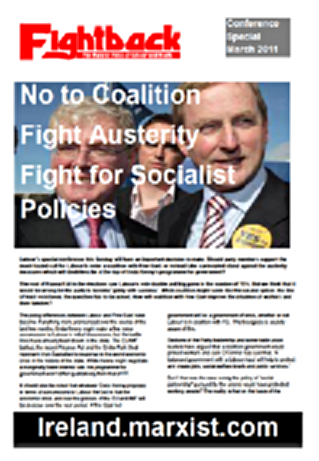 We will be arguing at the conference that coalition or a "national government" as it would be, will tie Labour hand and foot to a right-wing austerity programme. Here is the text of our leaflet, which we will be distributing on the day. If you would like a PDF copy of the leaflet to distribute in your Party branch or Labour Youth Group contact us at This email address is being protected from spambots. You need JavaScript enabled to view it..

Labour’s special conference this Sunday will have an important decision to take. Should party members support the much touted call for Labour to enter a coalition with Fine Gael, or instead take a principled stand against the austerity measures which will doubtless be at the top of Enda Kenny’s programme for government?

The rout of Fianna Fáil in the elections saw Labour’s vote double with big gains in the number of TD’s. But we think that it would be wrong for the party to become “giddy with success”. While coalition might seem the easiest option, the line of least resistance, the question has to be asked: How will coalition with Fine Gael improve the situation of workers and their families?

The policy differences between Labour and Fine Gael have become if anything more pronounced over the course of the last few months. Enda Kenny might make a few minor concessions to Labour in initial discussions, but the battle lines have already been drawn in the state. The EU/IMF bailout, the recent Finance Act and the Croke Park Deal represent Irish capitalism’s response to the worst economic crisis in the history of the state. While Kenny might negotiate a marginally lower interest rate, his programme for government won’t differ qualitatively from that of FF.

It should also be noted that whatever Enda Kenny proposes in terms of concessions to Labour the fact is that the economic crisis, and now the policies of the EU and IMF, will be decisive over the next period. A Fine Gael led government will be a government of crisis, whether or not Labour is in coalition with FG. The bourgeois is acutely aware of this.

Sections of the Party leadership and some trade union leaders have argued that a coalition government would protect workers and Jack O’Connor has said that, "A balanced government with a Labour input will help to protect and create jobs, social welfare levels and public services."

But if that were the case surely the policy of “social partnership” pursued by the unions would have protected working people? The reality is that on the basis of the current economic crisis the ruling class have no alternative but to attack working people if they are going to preserve their profits. At every turn of the negotiations between the government and the unions over the past period the “social partnership” broke down. Any “programme for government” agreed by Eamon Gilmore and Enda Kenny will have more holes in it than a sieve.

But isn’t coalition “in the national interest”? The truth is that Labour would become a hostage to the programme of Fine Gael. Enda Kenny will rule in the “national interest” of the Irish bourgeoisie and their masters in New York, London and the EU/IMF. The interests of working people are directly opposed to austerity measures, emigration, unemployment, wage cuts and 30,000 job cuts in the public sector.

James Connolly summed up the situation in “The Irish Worker” in 1915 when he said “Yes, friends, governments in capitalist society are but committees of the rich to manage the affairs of the capitalist class.” The only way to represent the interests of working people today is to break decisively with the policies of capitalist austerity and fight for a socialist programme.

The experience of the coalition in Britain between the Tories and the Lib Dems has been that the so called “radicals” among the Lib Dems have made no impact whatsoever. The Tories have introduced swingeing cuts which will have a catastrophic effect on working people as they work through. The Lib Dems have supported them and have suffered the consequences. They have been the ones to take the blame. Make no bones about it; the FG leaders will be more than willing to hand over the most exposed ministries to the Labour Party. Labour ministers will be put in charge of all the “social” ministries, the very ministries that will take the brunt of the cuts.

Coalition would sow huge divisions within the party. Labour has always come under pressure from the bosses, but fundamentally the party rests on the support of working class people. Under the present economic and political conditions in the state, that pressure will grow massively. If the party associates itself with Fine Gael austerity it would haemorrhage support. The Party will come into conflict with the unions and would become riven with splits reflecting the different class pressures upon it. The experience of past coalitions is clear; without a fundamental break with right-wing bourgeois ideas, Labour will become a hostage to them.

Labour has a clear choice to make; tail end Fine Gael’s right-wing programme and take the blame for the austerity measures, or adopt a principled stand and reject the austerity programme. Labour has won 37 seats; the party would become the biggest opposition party if we chose to reject coalition. But to become an effective opposition Labour needs a clear programme. Eamon Gilmore has vacillated and prevaricated over the big issues. Instead of fighting the cuts, for example, Labour’s position has been to seek to appear “reasonable” to the bond markets and the speculators. Labour needs to take a clear position on the question of nationalising the banks and in relation to the debts generated by the property speculators.

Labour needs to lead a struggle against austerity both in the Dáil and among the working class. A clear programme would demand no more cuts. Workers shouldn’t be made to pay for the bosses’ crisis. We need the nationalisation of the banks and big industry under workers’ control and management. Labour should demand an end to house repossessions and the nationalisation of any company making redundancies. Instead of bailing out the speculators Labour should fight for a socialist plan of production and a massive scheme of public works to mop up unemployment.

One thing is for sure, there is no solution to the problems of Irish workers and their families in coalition with Enda Kenny.