This article originally appeared in "The Red Plough" an independent Email journal of Republican Marxist opinion. It takes a clear position against the arguments of the capitalist press around the strikes on the 24th of November. In particular it deals with the question of "the national interest". The bosses are always keen to try and mask the class nature of society and here Gerry Ruddy points out the contradictions in their arguments and offers a class alternative. 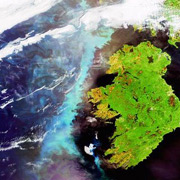 Nearly 250,000 Irish public sector workers took militant strike action on Tuesday 24th November. Except for areas of severe flooding where emergency workers continued to work with trade union permission there was a magnificent turnout by the Irish working class. Needless to say there was widespread condemnation by the ruling elites. Bourgeois politicians talked about the national interest using terms like “the nation must unite” “we must all pull together” and “we all must share the pain”.

The media also had a go. The Sunday Business Post before the day of action wrote,

“The trade unions will only make things worse with the strike action due to take place this week. The action is unwarranted - after all, we do not even know yet what is going to be in the budget. What’s more, it ignores the fact that cutting government spending is essential if we are to maintain our economic independence. It also deepens the divide between the union-dominated public sector and the private sector, going against the partnership ethos that the trade unions have preached for years. On a more practical level, it will also impose unnecessary inconvenience on the entire population. It is, in truth, the last thing we need. (SBP 22/11/09)

The Irish Times also had a go at the workers:

"At a time when social solidarity and a sense of personal responsibility are needed as never before, employees in the most protected sector of the economy have behaved selfishly - This is a time of national emergency. There is no point in vested interests demanding that others should carry the burden of financial repairs, while seeking immunity for themselves. Every individual and group should be required to contribute according to their means.” (IT 25/11/09)

Even the reporters of RTE joined in the condemnation by alluding to the huge backlog of Southern registered cars queuing to enter Newry in the north to shop. They neglected to mention that because of the high cost of living for working class families in the South hordes are now flocking to the north to stock up for Christmas. And who can blame them? For years on top of years the ruling classes in the South have been ripping of the poor with exorbitant prices for poor quality goods, poor public services whilst turning a blind eye to property speculators, corrupt politicians and preying priests and heartless, inhumane church institutions.

Talks between the Government and the unions are ongoing. At this stage there is no doubt that some sections of the trade union bureaucracy view a few days of action as a way of letting off steam and taming the militancy of the workers. But as Vincent Browne points out in How to fix a rich but unequal country (see below) actual facts are not taken into account by the political establishment but they should be by the political and trade union leadership of the working class. Days of action should be a prelude to a campaign for a one-day national strike.

Social partnership deals have been used to cut wages and conditions and privatise public services. Governments can rescues the banks with billions of public money but are determined to screw the poor.
Already we have had the pension levy, pay cuts budget and the establishment of An Bord Snip.

The struggle for a national strike is a sure fire way to begin the process of politicising the working class and stripping away illusions many workers have in any progressiveness in Fianna Fail and the Green Party. Any independents still supporting the coalition should be ashamed of themselves. They should break with the coalition and form a left bloc in the Dail that excludes any pro-capitalist party.

But there should be no illusions about the Dail. It may represent some vague abstract concept called “The nation.” But it is not our nation.

The real power that the working class has is in its own hands. A national strike would be but a beginning in the empowerment of the working class and a mighty step on its road to emancipation from the chains of capitalism.

The above article refers to a piece by Vincent Browne in the Irish Times. The text of this was reproduced in The RED PLOUGH directly following the 'Nation or class?' article. To assist readers we are therefore doing likewise:

How to fix a rich but unequal country

If the top earners paid 43 per cent of their income in taxes and levies, a further €3.2bn could be raised,
Just a few random facts, not that facts are much in use nowadays. Certainly not facts that contradict the line of the economic and political establishments.

Ireland is a very rich country, one of the richest countries in the world. Even allowing for a deeper contraction in the economy here in 2009 than elsewhere in the EU, our per capita income is still at least 10 per cent above the EU average. We are better off than countries such as France, Italy, Spain, Portugal and Greece and very much better off than all the 12 new member states.

There are only 10 countries in the world richer than the rich counties of the EU. They are three oil sheikhdoms (Qatar, Kuwait and UAE), and Liechtenstein, Switzerland, USA, Norway, Luxembourg and Japan. Perhaps now Australia and Canada are richer than Ireland, but, excluding the tax havens and the oil sheikhdoms, Ireland is probably the 16th richest country in the world. Ireland is 110 times richer than the Democratic Republic of Congo, where the per capita annual income is less than $298 (€199). The latter data is from the 2009 United Nations Development Programme report.

Ireland has one of the lowest tax takes – as a percentage of gross domestic product (GDP) in the EU. In 2007 our tax take was 32.5 per cent of GDP, as compared with an EU average of 40.9 per cent. Only Latvia, Lithuania, Romania and Slovakia were lower than us. Denmark had a tax take of 49.5 per cent, Sweden 48.9, Belgium 46.1, France, Italy 43.3 and Germany 40.8. Even with the levies, our tax take now would be among the lowest in Europe. (Data from Eurostat.)

If the top earners were obliged to pay 43 per cent of their income in taxes and levies, a further €3.2 billion could be raised in income tax and levies (this is a simple calculation: 10 per cent of €32.3 billion).

Even if the double earners who earn less than €160,000 were excluded from these additional taxes and levies and were allowed to contribute at a lower rate, the additional taxes could certainly net €2.5 billion.

44 per cent of all public servants earn less than €30,000 (this information was supplied in a written answer to a Dáil question on November 3rd and the data relates to the income tax year 2007).

75 per cent of all public servants earn €50,000 or less. Since these income figures come from the Revenue Commissioners and apply to total earnings, they include all allowances and bonuses.

Ireland is one of the most unequal societies in the developed world. The OECD calculated in its report Growing Unequal that Ireland was the 23rd most unequal of 29 developed countries.

Research on inequality, drawn from around the world and, in particular, the US, shows that the more income inequality there is in societies, the more prevalent is an array of social problems from obesity to imprisonment rates, violence, poor health, welfare dependency and low literacy.

The Government, aided and abetted by the main Opposition parties and the hordes of economists, refuses to see any relevance in any of the above in devising policies to fix the hole in the public finances.