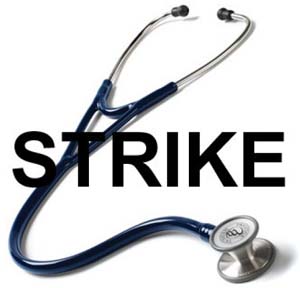 Over 1,000 junior doctors, members of Irish Medical Organisation (IMO), have voted by 97% in support of escalating their campaign up to and including strike action in opposition to massive workloads that breach the European Working Time Directive and shifts that can last more than 24 hours at a stretch.

In other words Junior Doctors are being forced to plug the gaps, regardless of the impact it has on their own health and the health of their patients. The fact that Health Minister James Reilly himself is a former president of IMO has no doubt contributed to the Junior Doctors decision.

IMO have reported that there will be a one day strike on September 25th followed by a rolling programme of strikes affecting regional hospitals.

IMO’s demands for adherence to the Working Time Directive and for reductions in the length of shifts are symbolic of the crisis in the Public Sector as a whole and of the HSE in particular. What is significant however is this time, they are prepared to fight.

Not that long ago Doctors in the West were seen as a privileged group, middle class and often remote from working people. But today the conditions for this layer is being pushed down to the same as the working class. The crisis of capitalism on a world scale has has escalated this process massively. That makes this an important strike.