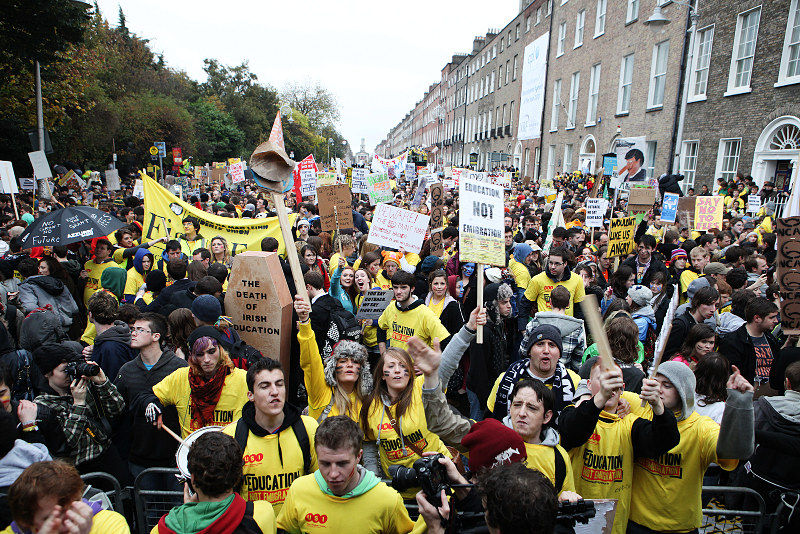 Despite some increasingly desperate and clumsy attempts to hide the fact that they were in discussions with the EU and the IMF over a bailout the Government was eventually forced to admit what everyone already knew; that they were desperate to secure a huge bailout to attempt to stabilise the Irish economy. The announcement was met with a huge wave of anger and the thin veneer of normality in Ireland has been ripped apart on prime time TV.

The coalition government is in meltdown after the Green Party decided to pull the rug out from beneath the Taoiseach and as consequence Brian Cowen looks to be slowly swinging in the wind, although at the moment he seems to be desperate to hang on until the small business of the four year draconian budget is dealt with. The fallout from the government’s dithering and vacillation in respect of the intervention of the EU and IMF has accelerated with the decision of the Greens to call for a General Election in January. However, the depth of the crisis within the Fianna Fáil means that it’s not unlikely that the budget might fail in the Dáil. Certainly, none of the “independents” will be racing to the defence of Messrs Cowen and Lenihan. The political survival instinct apparently gets stronger the closer to the edge of the abyss.

The crisis in Ireland has entered a new stage since the arrival of the EU in Dublin. But it is important to examine the reasons behind the current impasse. The crisis in Ireland is particularly acute, but Ireland is merely the latest European Country to be crucified by the financial speculators and the greed of big business. The roots of the Irish crisis lie in an economic recession in the US leading to a collapse of the US Sub Prime Mortgage Market in 2007. The huge credit bubble in the USA and Western Europe sparked a massive hike in house prices and a speculative building boom in Ireland. However, when the crisis in the US banks spread to Europe and to Ireland. The Irish economy was massively affected by the huge drop in world trade and the effect of the banking crisis.

The Irish Banks were particularly exposed, in part because of the speculative nature of the property boom, but also because of their relatively small size. In addition the general crisis within the euro zone means that Europe is far from the situation that existed during the Celtic Tiger years where the various euro zone economies were growing. Under those conditions the huge disparities between big rich economies like France and Germany and small peripheral economies were masked. Now the superficial character of “convergence” has evaporated and the underlying contradictions between the various economies have come to the fore. In the past the various states would have had the option of devaluing their currencies to seek some competitive advantage. While any advantage would have been temporary and soon wiped out by rival economies taking the same line, the rigidity of the euro zone frame work means that the contradictions between the economies need to be expressed in other ways. This means that the role of the bond markets has become extremely important.

The crisis that developed in respect of the state finances is a direct result of this. Ireland’s trade based, small, peripheral economy had entered a serious crisis which placed it at or near the bottom of the heap among the euro zone Countries. The Government was further weakened by the revelation that the cost of bailing out AIB would run to “€34.6 or maybe even €46 billion euro”.

But even if the government secures a huge €90 to 100 billion loan, that will be accompanied by stringent conditions. The forthcoming four year economic plan and by extension the forthcoming budget has been inspected with a fine tooth comb by the EU and the IMF. The budget is likely to be draconian with attacks on welfare, further cuts and “reform”. Under these conditions the limited protection afforded by the Croke Park Deal – which stated that there would be no further public sector wage cuts for the next four years, in return for major “reforms” in the public sector- will most likely be swept away.

The EU and IMF intervention will effectively open a second front against the working class. The mood in the state is angry and this has already been reflected in the decision of the TEEU trade union to support a campaign of civil disobedience if the government didn’t resign and call a general election. While this is an important turn of events, it reflects the pressure from below. The TEEU organises in the public but most importantly in the private sector. The fact that the union has taken this stance shows that there is a big potential to unite the private sector workers with the struggle in the public sector. The next period will most likely see a big resurgence of trade union action, particularly in respect of the budget. The movement ebbed for a period after the signing of the Croke Park Agreement, but the campaigns in local areas recently over cuts in hospital services which saw 10,000 people marching through Navan for example, indicates that even before the recent crisis broke opposition within the working class was growing.

With a by election due on Thursday 25th November and the government in a state of collapse it is even possible that the budget will fail to be carried in the Dáil. However there is talk that Fine Gael TD’s may abstain or vote through the budget. Such deference to the “national interest” won’t hold water with workers who are going to be in the firing line, nor will it appease the pensioners or the unemployed who are likely to be made to suffer by the budget also. The current crisis is demonstrating the divisions between Fine Gael and the Labour Party even under Eamon Gilmore’s leadership reflecting the different class bases that the two parties rest upon.

The new period that is opening up in Ireland will bring into sharp focus the storms and stresses of the last two years. The coalition will be swept from power in a wave of opposition. The probable outcome in the forthcoming election, which will most likely take place in January or February, will be a Fine Gael/Labour Coalition. However, this need not be the result. Labour could easily win a majority in the Dáil if it broke with pro capitalist policies and adopted a clear socialist programme. That means calling for the nationalisation of the banks and big industries under democratic workers control and management, the cancellation of the debts and the socialist planning of industry.