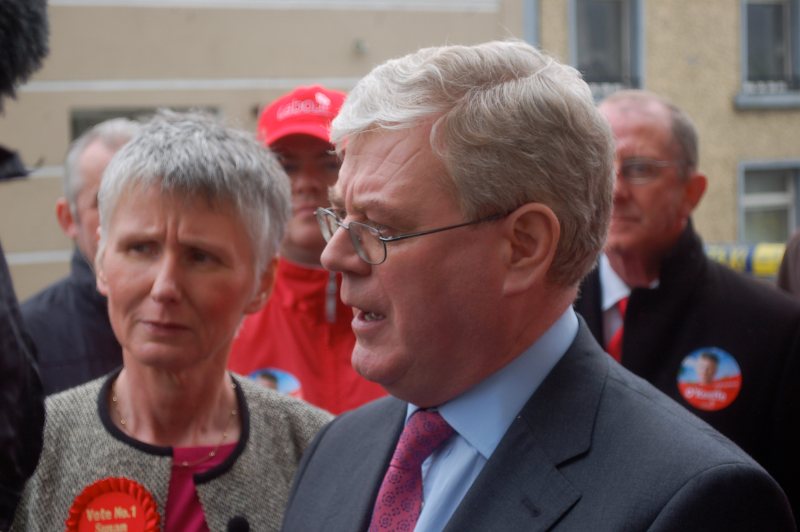 Ireland faces the biggest crisis in world capitalism since the 1930s and for that reason there’s never been more need for a socialist response to solve the problems workers face. With that in mind, how do the Labour leadership stand up to scrutiny?

While no doubt Eamon Gilmore will be satisfied by the latest polls that give him a 54% per cent poll rating and Labour 29% of the Dublin vote, it seems that Labour’s support has fallen to around 19% lagging behind the Fianna Fáil on 27%. The Fine Gael are well ahead of both and it seems likely that Labour will end up as the junior partner in a coalition lead by Enda Kenny.

The European and County Council elections in 2009 revealed a shift to the left in the Dublin area in particular. Clearly that reflects the workers drawing political conclusions from the crisis. The Labour leaders have prevaricated over the question of the cuts, and particularly the public sector strikes. But periodically they have been forced to move under pressure, for example in relation to the call for the (temporary) nationalisation of the banks.

Despite the lack of a socialist programme, Labour is swimming with the stream and is likely to gain a few seats come the next general election. This represents the line of least resistance. However, nobody should be under any illusion that a change of government will solve all the problems. The next government will be a government of crisis. The Irish economy, when it eventually comes out of recession will lead to a government of crisis. It will be deeply indebted and will face mass unemployment, emigration and industrial struggle as the economy goes into an upturn. It is most likely that economy will follow more closely the pattern of the 1980s rather than the Celtic Tiger years.

Under these conditions, any Labour/Fine Gael coalition would come under contradictory pressures from the bourgeois and the working class. There will be a differentiation in the party and the emergence of a more critical left wing. Gilmore has a certain standing in the party at the moment. That’s no surprise given his standing in the polls, but there’s a mile of difference between riding on a wave of opposition to the government and delivering your programme.

The lessons of Déidre de Búrca’s resignation and the recent crisis in the Greens are that the major party in the coalition will rule the roost. Labour in coalition with the Fine Gael, would be a minority partner, albeit with more seats than the Greens and is likely to be landed with all of the more “exposed” jobs in the cabinet.

But, there is another way for Labour and that is to fight for a socialist alternative. We’ve argued that the only way to solve the banking and economic crisis is to nationalise the banks under workers’ control and management. Also any company that threatens redundancies must be nationalised under workers’ control and management. The recent decision to ship the production of Waterford Crystal out of Ireland illustrates this point.

The nationalisation of big industry and the land would provide the economic basis to solve unemployment and wage cuts at a stroke. Capitalism has no solutions and it needs to be replaced with a rational system of socialist planning under the control of the working class. We can’t afford to pay for the bosses’ crisis.

The most forward thinking activists in the Labour Youth and the Labour Party and more importantly at this stage in the unions are looking for a socialist solution to the problems in Irish society. It is our role to try and link up with them and build a genuine Marxist tendency that can help to accelerate that process.