We are delighted to announce the publication of Fightback: the magazine of the International Marxist Tendency in Ireland. The first edition of the magazine comes in two editions for the North and the South – they have different front and back pages and industrial material. This edition is full colour and has 20 pages. 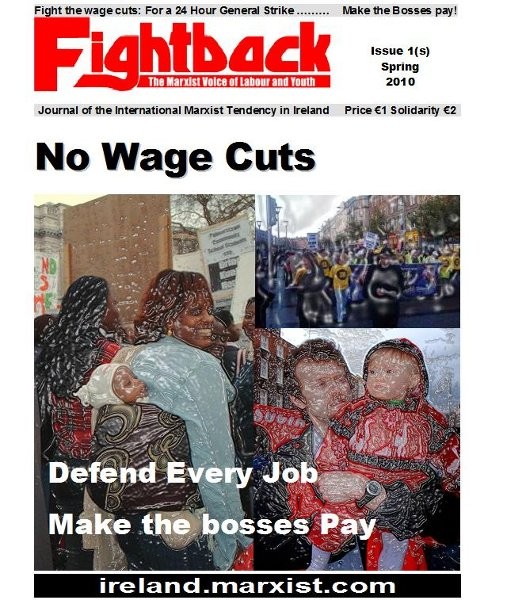 Fightback is being launched at a crucial point in Irish history; the North is at an impasse with the main parties Sinn Féin and the DUP under pressure from the dissident republicans on one side and the Traditional Unionist Voice on the other. Meanwhile, they face each other at Stormont administering a glorified County Council. There are huge cuts on the way which will have a dramatic effect at a time when 63% of jobs in the North are dependent on the state.

Meanwhile, South of the border, the collapse of the “Celtic Tiger” and the crisis in state funding means that the bourgeoisie and the Fianna Fáil and Green Party coalition are attempting to place a huge burden on the working class. The trade union leaders have come under huge pressures, as the working class have shown time and time again that they are prepared to struggle, but still they are vacillating and prevaricating over the failed policy of “Social Partnership”.

In July 2009 we launched the Fightback website. The response has been tremendous with regular readers from Dublin, Belfast, Derry, Cork, Galway, Limerick, Waterford and many other towns and even villages. We knew that there were a lot of people following In Defence of Marxism in Ireland. Dublin is one of the top 5 cities in the world for hits on that site. We are confident that the magazine will be well received.

You can subscribe to Fightback or make a donation to €2,000 fighting fund that we have launched through Ireland@marxist.com

The cost of subscription is €8 including P&P for the Republic £7 for the North for 4 issues.

Subscriptions can be purchased through Wellred.