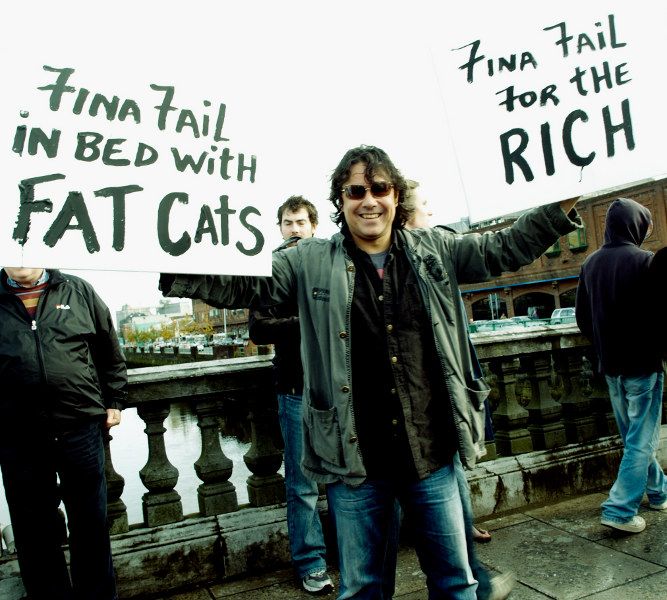 There’s been a steady procession of attacks on the public sector over the last couple of years. Wage cuts, levies and a deluge of propaganda. We’ve made the point elsewhere that the FF and the Greens are in a cul de sac, they are most likely going to be slaughtered in the next general election. So by all accounts they have nothing to lose. They have launched a one sided civil war against the working class at the behest of the bourgeois, the home grown variety of course, but also the multi nationals based in London and New York.

The latest twist in this sorry tale is the prospect of a huge privatisation sell off. As the Irish Times reported on July 23rd:

“Airports, ports, RTÉ and the ESB are included in a list of State companies that a Government-appointed group will consider selling in an effort to cut the €84 billion national debt.

“It is charged with looking at the possibility of disposing of public-sector assets, including commercial State companies.

“The Labour Party said any move to offload valuable state assets to plug a hole in the public finances would be a retrograde step.

“According to a preliminary list published yesterday by the Department of Finance, the organisations it will cover include all major State companies, such as ESB, Bord Gáis, RTÉ, Iarnród Éireann, Dublin, Cork and Shannon airports, (all owned by Dublin Airport Authority) 10 port companies and Bord na Móna.

“The national debt stands at €83.98 billion, but the sale of these companies could generate a lucrative return. For example, the ESB’s assets, its power plants, networks and energy business, are valued at €7 billion. Bord Gáis has assets worth €3.5 billion.”

This proposal is a well worn path, the example of Thatcher’s Britain in the 1980’s stands out as an example of wholesale looting of state assets, but its been repeated throughout the world and in Britain under New Labour. Under the present economic conditions it’s likely that there will be further waves of privatisation on an international scale, unless there is a strong response from the working class.

But what’s in it for the capitalists? It’s fairly clear why the government are planning to sell off so much, on one level it’s merely an accountancy measure. They can use privatisation to raise money from share sales, but on the other hand there’s also a political benefit to them. Privatise services and break up the power of the public sector unions.

The “Big Lie” associated with privatisation is that private companies are more efficient. But what does that mean in practice. In labour intensive industries like social care, health and local government services these so called efficiencies can only be created by cutting wages and intensifying work loads. In other words they make a profit by charging €12 an hour for a cleaner and pay them €8. This just creates low paid jobs and pressurises wage levels on a downward spiral caused by so called “competition”.

The argument that private investment improves services merely reflects the fact that state industries have been underfunded and new investment hasn’t been forthcoming. The rail service in Britain is now snarled up by the pointless division of the national network between competing companies, while gas supply companies plague the life out of people as they try and increase their market share.

“Labour spokeswoman on natural resources Liz McManus said state companies showing potential should become leaders in delivering renewable energy and that selling them off could put "all that potential" at risk.

"One only has to look at the disastrous sell-off of Eircom and the many changes of ownership which followed, which has resulted in capitalist vandalism destroying Ireland's prospects of becoming a world leader in broadband and next-generation network," she said.”

There is no surprise that Colm McCarthy has been chosen for this latest mission in capitalist vandalism. After all after An Bord Snip he is no doubt seen as a safe pair of hands who will deliver the goods. Potentially this privatisation agenda has far more far reaching effects even than that.

The Croke Park Deal was supposed to prevent wage cuts in the public sector. We explained at the time that there is more than one way to cut wages. Privatisation is a key plank in reducing public sector pay. As such it has to be resisted. Thatcher’s privatisation policy was accompanied by an ideological campaign in favour of so called popular capitalism. Share prices were set artificially low and then the big players moved in and offered a higher price. Popular capitalism was a big con, the big capitalists cleaned up.

While its unlikely that the FF and Greens would be as sophisticated as that, there will inevitably be a softening up process and the trade unions will have to actively campaign against the proposals. The coalition is in a tight spot. They have already postponed a number of by elections and they have a very small majority. A campaign of opposition explaining the political issues behind privatisation would gain mass support. It is no coincidence that this proposal comes on the back of the Croke Park Deal.

The trade union leadership was desperate to secure a deal with the government and they just about squeaked it through. Tens, even hundreds of thousands of workers saw through the Croke Park Deal. Under the present circumstances there is no guarantee that Cowen and Lenihan will get away with a huge privatisation programme. But to beat them we need to fight for a trade union leadership worthy of the name.