News that the Coalition reached a deal with the EU and IMF hasn’t come as a shock. Reports were circulating for days that the EU and the Finance Ministry were locked in discussions and some have even claimed that the IMF was been briefing the heavyweight financial bourgeois press internationally in an attempt to pressurise the coalition and the opposition parties into seeking a deal. This article was written prior to the announcement of the deal but its analysis has been confirmed by subsequent events. 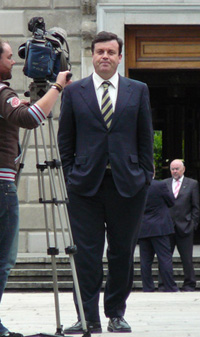 Brian Lenihan. Photo: nerosunero The European Financial Stability Facility (EFSF) was set up in July in anticipation no doubt of situations like the collapse of the Irish banking system and the threat of an Irish economic meltdown. While the financial markets have reacted favourably to talk of a deal, which they hope would stabilise the euro zone, it should be remembered that those hopes have been dashed before. Ireland is only one of the sickest patients in the ward, not the only one by any means. The European Union have their own interests in mind.

For the Fianna Fáil leadership however the implications of a deal with the EU are very serious. Concern over national sovereignty and humiliation in the event of a bailout which might be of the order of €70-€85 billion threatens to split the party, which traces its tradition back to the Republican forces in the Civil War. The offer from the British Tories to help in the bailout won’t help either. With Cowen at rock bottom in the polls, the air of chaos and financial mismanagement only adds to the crisis. FF TD Ned O’Keeffe has called for Lenihan to resign and reports indicate that attempts to set up a website to promote a group called Fianna Fáil Nua were only foiled by a party loyalist buying up the domain name. The government could easily fall within a few months if not earlier.

Certainly many workers are looking at the situation with utter dismay, the government is faced with an electoral disaster at the by election on November 29 and as we have reported at least one FF TD has threatened to vote against the budget. The budget due on December 7 is set to introduce up to €15 billion in cuts over four years. But even the detail of the budget is now in doubt. The French and German governments are demanding a rise in the 12.5% rate of corporation tax by way of compensation for the bailout. The capacity of the Irish national bourgeois to solve the problems of the state is in serious doubt. Connolly famously pointed out that raising the Green Flag over Dublin castle wouldn’t solve Ireland’s problems as the British would still rule through their banks and their capitalists. Those words ring true today, but it’s the EU and the IMF as well as the City of London and the US that call the shots now.

While some people have said that the EU intervention couldn’t be any worse than what we see now, the reality is that any deal will be accompanied by strict rules and strictures. Patrick Jenkins writing in the British Financial Times commented:

“Finally, the authorities in Dublin failed to learn the big lesson from the Lehman Brothers’ collapse – it is an absence of liquid funding, rather than weak capital, that kills a bank. Ireland’s guarantee on retail deposits stopped bank runs on the high street, but corporate clients have withdrawn billions. At the same time, Ireland has been in effect blacklisted by the interbank market, leaving the European Central Bank and Ireland’s own central bank as last-ditch liquidity providers.

“With hindsight, this endgame was inevitable. What is crucial now is that the strings attached to the Irish bail-out by the EU-IMF delegation are tough enough – the asset modelling, capital shortfall calculations and funding projections must be as conservative as possible. It is not only the survival of the Irish banks that hangs on the credibility of this bail-out – so too does the health of the eurozone banking system.”

The position of the bourgeois is clear, Ireland has to be squeezed. FF TD Ned O’Keeffe made a very interesting comment today however, and that was that IMF interventions have lead to the formation of “a lot of left wing countries”. The point is very interesting in that the history of the IMF interventions in Latin America in particular was one of massive austerity programmes and monetarist economics which created huge misery for the masses in the ex-colonial countries. The movements of the masses in Venezuela, Bolivia and Ecuador and throughout the whole of the continent have their roots in the debt crisis of the 1980s.

The crisis in the Irish economy has repeatedly undermined the idea of social partnership which had been the norm during the Celtic Tiger years. The series of attacks on the public sector workers and the repeated failure of the government and the unions to find any stable deal are symptoms of the serious crisis. The Croke Park Deal, which was forced through ICTU by the leaders of the main unions in the teeth of opposition from many workers and a significant section of the unions, was heralded as a safeguard for workers’ wages in return for “flexibility” and “reform” in the Public Sector.

The Irish working class faces a generation of austerity. This deal will be accompanied by rules that will make An Bord Snip look like a bit of light dusting. The same newspapers and pundits who tried to sell us the Croke Park Deal are now demanding that it be ditched and that the government attacks workers’ wages again, combined no doubt with massive redundancies. This is a finished recipe for class struggle in the state.

However, there is a huge question over the ability of the trade union leadership to adequately represent the membership and lead a struggle to defend services, jobs and conditions. The ICTU leaders are tied to the perspective of social partnership at a time when the bosses are preparing a fresh onslaught. The movement needs to prepare for the struggles ahead. Central to that is to forge a clear sighted leadership with at least a grasp of how to effectively lead that fight.