Ireland
Share
Tweet
On February 21 some 200,000 workers and their families took to the streets in Dublin, to demonstrate their opposition to the government's decision to impose a pension levy on 300,000 Public sector workers. Apart from that, the most significant in recent months may have been the occupation of workers by Waterford Crystal.  The class struggle is growing in Ireland and the union leaders are under pressure.

On February 21 some 200,000 workers and their families took to the streets in Dublin, to demonstrate their opposition to the government's decision to impose a pension levy (€ 2 billion) on 300,000 Public sector workers. The huge success of the march however, resulted from various factors such as the deepening economic crisis, rising unemployment, the ditching of the social contract by the employers and the government and savage government budget cuts. But what most concerns the majority of workers is that the situation is likely to worsen. 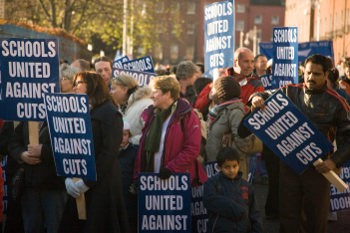 The government is looking for €2bn worth of cuts and that means pay cuts for public sector workers. Photo by informatique.

The decline in economic activity has affected the revenues of the state. In July last year the government decided to cut the state budget by 1.4 billion euros. In October, they introduced a new cut of 2 billion, with a further cut of 2 billion in February. These cuts will affect education, health and social benefits. The government has also announced that taxes will rise, but not for corporations, which at 12.5 per cent are the lowest corporate taxes in the European Union. However the impact of the crisis is going to be brutal on the pockets of workers. In the public sector, for example, the teaching unions have estimated that workers will see their wages cut by 14 per cent.

Government and employers have also unilaterally cancelled the agreement that has regulated social relations in Ireland since 1987 and was renewed every three years. Last year, employers, government and unions agreed on wage increases of 6 per cent in 21 months to apply after a 3 months wage freeze in the private sector and a nine month freeze in the public sector. In practice the covenant implied a drop in real wages, because they fixed the increase below the rate of inflation. But the workers won’t even get that now. Various sections of the employers have even called for the removal of the minimum wage.

The unions, through ICTU (Irish Congress of Trade Unions), are now demanding a national ‘solidarity pact’ in which all social sectors will contribute according to their abilities. The trade unions have stated that the government and employers are trying to escape the crisis and restore the rate of profit at the expense of sacrificing the interests of the workers. But it is a completely utopian to attempt to resurrect a ‘social partnership’ in times of crisis. Even during the economic boom between 1995 and 2007 the workers didn’t gain from ‘social partnership’. For example, the share of wages in total national wealth was 71.2 per cent during the period 1980-1990, in the period 2001-2007, this percentage dropped to 54 per cent. This, coupled with high economic growth, gives an idea of the huge transfer of wealth into the pockets of the capitalists in recent decades. That is what the ‘social partnership’ has delivered. But in times of crisis there are not even crumbs for the workers. There is no room for reforms. The crisis has buried reformism, which has been essentially on its last legs ever since the crisis of the 70s.

However, in order to compel government and bosses to return to negotiations, the unions have threatened to mobilise the workers. After nearly two decades of relative peace between the social classes (‘social partnership’, for example, stipulated that workers could not go on strike to demand wage increases), the situation has become explosive. ICTU has called upon all its affiliated unions in the public sector and private, to organize simultaneous strikes on March 30. That would in reality be a 24 hour general strike. But the trade union leaders are still confident that the government is willing to negotiate and the strike can be avoided. The Labour Party leader, Eamon Gilmore, has even repeatedly asked the workers not to strike because they could worsen the economic situation and the credibility of the Irish economy in international markets. The working class lacks leadership.

But it is not so easy to contain the mood of the workers. In education, some 60,000 workers have voted to strike as have the transport workers. On February 26 the lower paid sections of the civil and public servants struck with a 100% turn out on the day. They have decided to join the strike from March 30. Across the country, unions are organising votes for a mandate to strike. 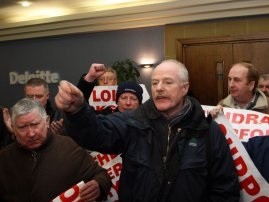 The occupation of Waterford Crystal is solid with some 300 workers involved. Photo by éirígí.

The most significant in recent months may have been the occupation of workers by Waterford Crystal. This company at one point had a workforce of over 3,000 workers. In recent years the workforce was reduced to less than a thousand, and in January the owners announced the closure of the company. The workers, on their own initiative, decided to occupy it. A section of workers have demanded its nationalisation. UNITE, the union representing 90 per cent of the workers; however, didn’t nail their colours to the mast of nationalisation. After more than a month of negotiations a U.S. buyer emerged. But they are likely to dismiss half of the workforce. The workers are continuing with their struggle.

The class struggle, therefore, is growing in Ireland and the union leaders are under pressure. In this situation, particularly if the government refuses to negotiate, the leaders may be forced to go further than they wanted. For now they are trying to reach a compromise. The government, moreover, would only negotiate with the unions if the strike threatens to run out of their control. They are currently known to have consulted the main opposition parties, Fine Gael and Labour Party in respect of the forthcoming emergency budget.

The most important task for socialists and Marxists of Ireland is to organise and intervene within the labour movement and the working class. We must raise our demands to extend and arm the movement with the ideas of Marxism. The program of nationalisation and workers' control of banks and key sectors of the economy must be integrated with the fight against attacks on workers by the government and employers.