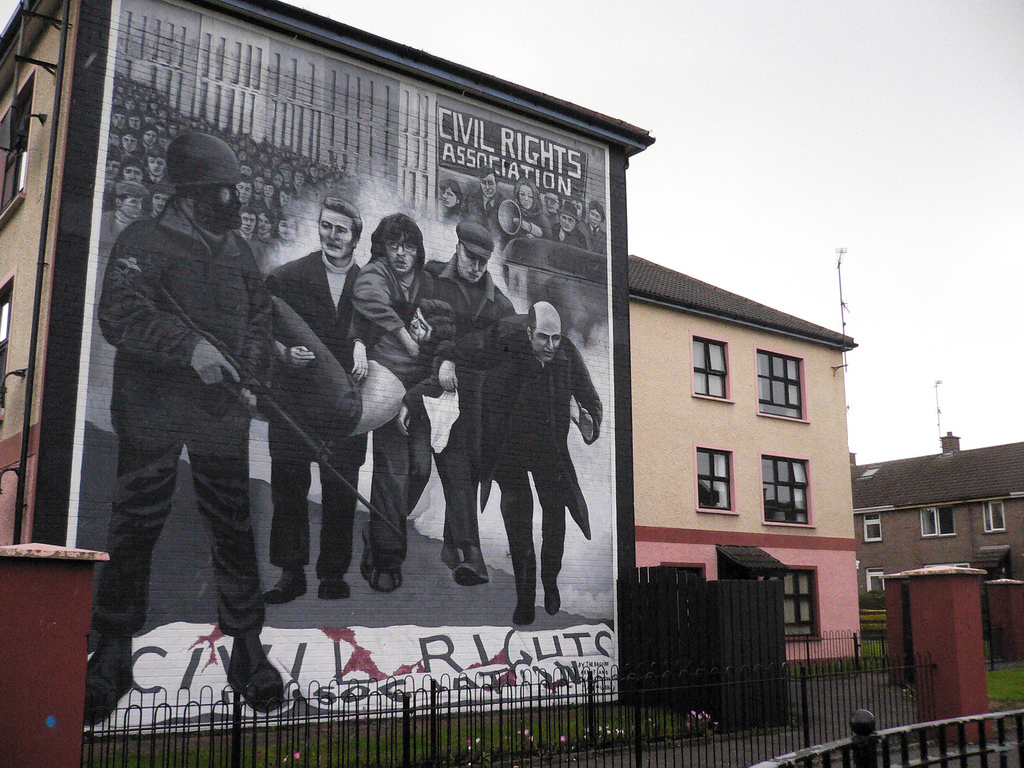 After 47 years of waiting, the Public Prosecutor in the North of Ireland has decided to prosecute just one soldier – known as Soldier F – who was involved in the Bloody Sunday massacre committed by British paratroopers in 1972.

On 30 January 1972, in the Bogside area of Derry, British paratroopers shot 28 unarmed people, during a civil rights march against internment. ‘Bloody Sunday’ is how this day has been remembered.

13 people were left dead (a 14th person died some time later and his family believe the death was related to injuries he sustained on the day), six of whom were as young as 17 years old.

Five months earlier, in August 1971, after an intense period of escalating violence and increased bombings, a new law was introduced giving the authorities the power to 'intern' people without trial. This was the spark of the protest that Sunday.

Since 1972, there have been various enquiries ‘reviewing’ the incident. The first one found the British paratroopers to have “acted courageously and without fault”. The Widgery report, published 11 weeks after the event, smeared the victims as dangerous criminals, looking for a vicious encounter with the police. The British officers even claimed for some time that they had been shot at, which has since been proved to be a lie. The dead were innocent victims of British imperialist oppression.

It has also been revealed that Major General Robert Ford, who ordered troops into the Bogside that day, had weeks before the Bloody Sunday massacre sent a secret memo to his superiors saying, “I am coming to the conclusion that the minimum force necessary to achieve a restoration of law and order is to shoot selected ringleaders amongst the DYH [Derry Young Hooligans].”

Ford’s role has been completely swept under the carpet by the Saville report, published in 2010. At any rate, he can no longer face justice as he passed away in 2015. Meanwhile, Captain Mike Jackson (later promoted to the top of the army, becoming the British Army’s Chief of Staff), who was present during a similar massacre in Ballymurphy some months before, and who watched the events of Bloody Sunday unfold, absurdly claimed that he had not seen any shots fired.

When questioned as part of the Saville investigation, Jackson answered along the lines of “I don’t remember” no less than twenty times. This was despite the fact that the ‘official’ version of events for thirty years was based on a ‘shot-list’ supposedly compiled by a colleague of Jackson, but later found to have been in Jackson’s own handwriting.

The establishment has been caught trying to cover up for itself. The ‘evidence’ of Jackson, a man at the heart of the establishment, has remarkably enough been taken as good coin by the Saville investigation, thus absolving the military hierarchy. ‘Rogue elements’ have instead been scapegoated.

Soldier F is to be prosecuted for the alleged murders of two victims, and the attempted murders of four others.

After the Saville Inquiry in 2010, David Cameron issued a public apology for the actions of the soldiers, describing the killings as "unjustified and unjustifiable". This apology, decades after the event took place, was completely hollow, as is the ruling of the Public Prosecution Service now.

It suits them to throw one individual under the bus and put the whole issue to bed. Soldier F is just one man. But it is all the generals and high-ranking officials of the British Army who ordered the soldiers to shoot on that day. It is the army and the British state that murdered these civil rights protestors. The British state have slaughtered and repressed the Irish for years. Tokenistic ‘apologies’ fifty years after the event are merely sops.

Even this sop is too much for the reactionary right of the Tory party. Northern Ireland Secretary, Karen Bradley, anticipated the decision of the Public Prosecutor by describing the paratroopers who opened fire on unarmed protesters as having "served with courage and distinction" and that they were "fulfilling their duties in a dignified and appropriate way". She said of the killings that they "were not crimes".

Others in the party have gone further, with Defence Secretary Gavin Williamson promising to drive through new laws that would prevent prosecution of soldiers who he said "cannot live in fear of prosecution". Effectively, soldiers would be given license to act with complete impunity whilst in the service of British imperialism.

The background to the events of Bloody Sunday were in the revolutionary civil rights movement that exploded in 1968. Historically, the British state in Ireland had made massive profits from the industries in the North, while keeping workers divided along religious lines. The Catholics were systematically discriminated against.

The deliberate partition of the isle was to ensure a permanent Unionist, protestant majority in the new Northern Ireland State. All manner of underhand, anti-democratic means were used. Gerrymandering was routine, and businesses were given additional votes in elections! This helped ensure a constant unionist majority even in Catholic majority areas (like Derry).

After years of repression and discrimination against Catholics, drawing inspiration from the civil rights movement in America and elsewhere, workers and young people across the sectarian divide decided to fight back. But the sectarian monster of Ulster loyalism that had been created by the British, reacted by attacking any civil rights marches. With the threat of a pogrom against Catholics, British troops were deployed, supposedly to ‘protect’ the Catholic population.

The Marxists opposed the sending in of British troops and warned that they would not protect the Catholic working class. The Ballymurphy and Bloody Sunday massacres tragically confirmed this prognosis. At a certain stage the British ruling class decided on the most savage means to crush the civil rights movement and put an end to groups like the ‘Derry Young Hooligans’.

Marxists instead called for the formation of non-sectarian self-defence committees, based on the trade unions. In Derry, the Young Socialists took the lead manning the barricades and running the 'Free Derry' radio station.

There was a natural instinct towards forming such non-sectarian workers’ defence committees. However, the left-wing Officials refused to arm the workers and youth. Instead it was the right-wing Republicans around the Provisional IRA – the only sizeable group who had guns and were prepared to use them – who recruited Catholic youths in droves after Bloody Sunday.

In reality, the “armed struggle” of the IRA did not bring the north any closer to a united Ireland. All it brought was death and misery for the working class, by substituting class struggle for individual acts of terrorism. As violence spiralled in the period of ‘The Troubles’, thousands of Catholics were forced to flee the enclaves of Belfast in which they were a minority.

Today, as the economic crisis deepens, sectarianism has far from gone away. It grows like a cancer in the bowels of a crisis-ridden capitalist system. The crisis of capitalism is reflecting itself today in every sphere of society in the North of Ireland: an economic crisis, a mental health crisis, an NHS crisis, the Good Friday Agreement in crisis, and so on. 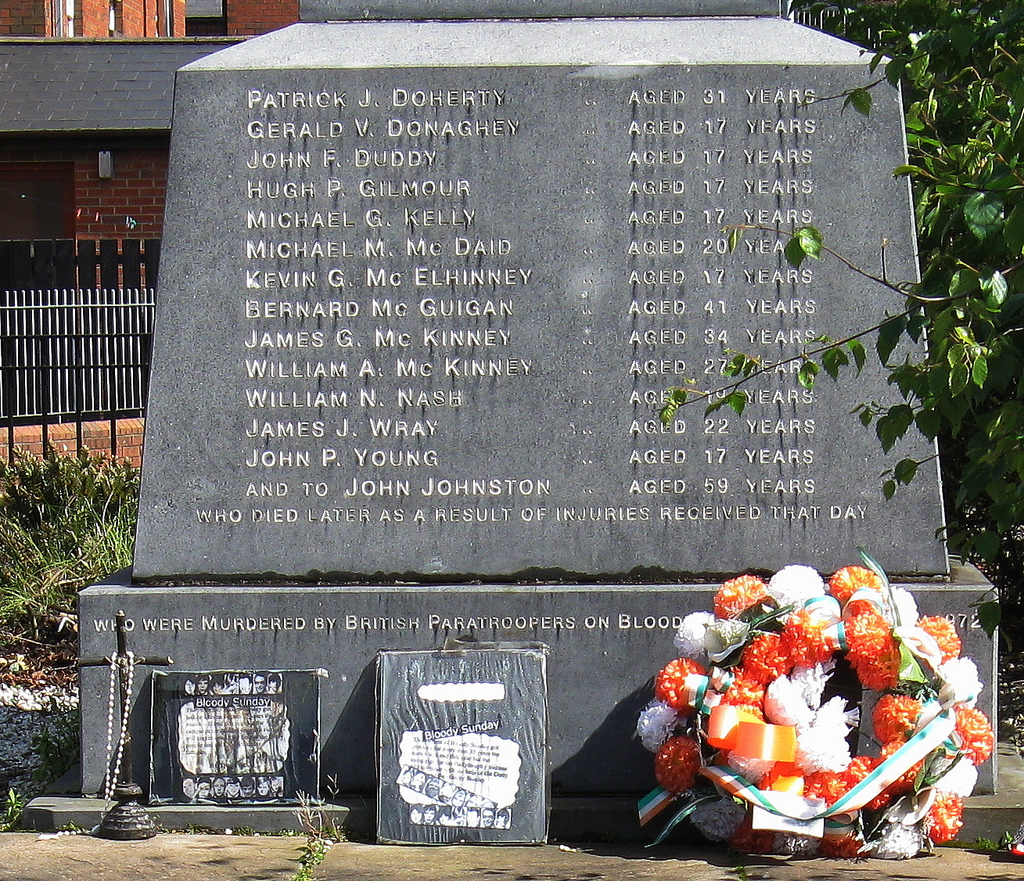 The national question is fundamentally linked to the class question. We must remove the British state, and unite the working class across for a united socialist republic / Image: Flickr, nicksarebi

The growing bitterness that this engenders threatens us with an explosive return to a sectarian past. We see how in the last year alone there has been a 23% increase in the number of 12 July (anti-Catholic) bonfires, according to the fire service.

The national question is fundamentally linked to the class question. Individual terrorism has failed. Reformism has failed. We must remove the British state, and unite the working class across all lines, religious or otherwise.

For a united socialist republic, free from imperialism, free from capitalism!