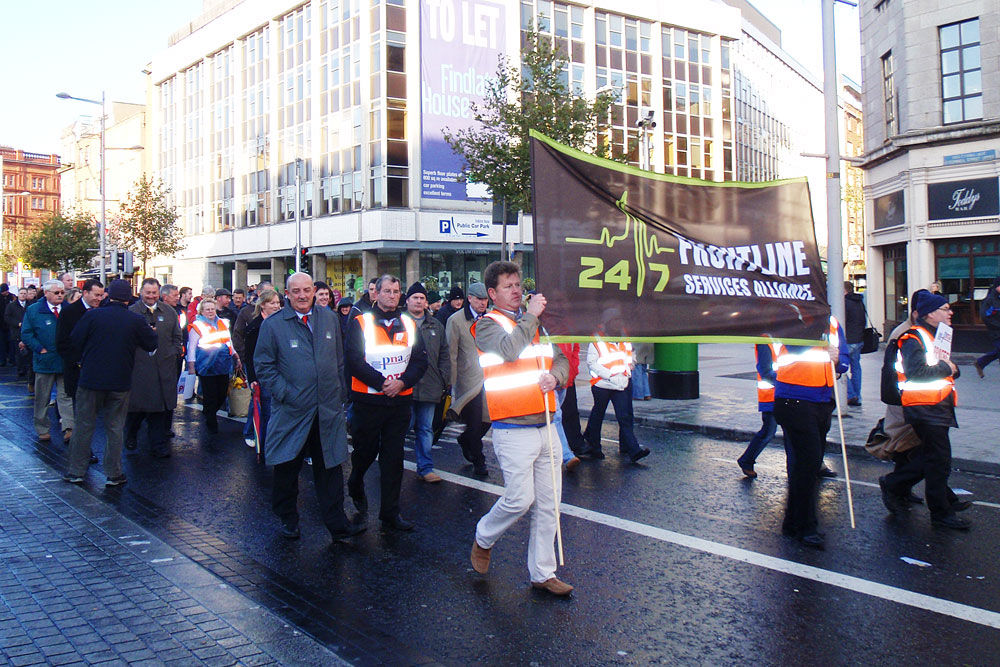 The National Basketball Arena in Tallaght has 2,500 seats. All these were filled tonight not to mention that more than 1,000 other people were standing in the aisles and around the doors. The 24/7 Front Line Alliance pulls together general and psychiatric nurses, paramedics, prison officers, fire services and gardaí. The mood from the rally was clear; no more pay cuts.

The rally comes against the background of Government proposals to attack wages, terms and conditions as part of the renegotiation of the Croke Park Agreement. Taoiseach Enda Kenny has even threatened to legislate to cut pay. But it is clear from the strength of feeling in Tallaght tonight that this is shaping up for a major battle. As RTÉ reported tonight:

“Seamus Murphy of the Psychiatric Nurses' Association received a standing ovation, saying "no deal is better than a bad deal".

He also responded to the possibility of the Government introducing legislation to cut pay by saying: "They need to be careful. Do you remember what happened to the last crowd that cut our pay?"

Talk of a sellout reflects concerns about the role of the ICTU negotiators involved currently in renegotiating the deal. It’s clear that both the public sector employers (that is the Government) and the Trade Union leaders are anxious to reach an agreement. The experience of 2009/2010 was that the Trade Union leaders and the Government spent months and months in seemingly endless talks about talks before the original Croke Park Deal was signed.

Already a number of unions have threatened to ballot members on potential strike action, including Firefighters in both Siptu and the Irish Fire and Emergency Services Association (IFESA). Tonight’s rally heard statements from the leadership of the Garda Representative Association to the effect that they were ready to start low level industrial action but would consider escalation. As the Irish Times reported:

“The president of the Garda Representative Association John Parker confirmed his organisation would commence low-level actions such as not using their personal equipment for official duties.

“The options are vast including the full nuclear option.”

“If you do not want to pay us for Saturday night and cut our allowances, we will not be working on Saturday night”, he said to tremendous applause.

“John Kidd of the Irish Fire and Emergency Services Association said if the Government wanted to test the resolve of his members, there would be no emergency cover provided by the fire service in any dispute.”

The Irish Times reports also that the 24/7 alliance have written to Brendan Howlin the Minister for Public Expenditure and Reform yesterday stating that there is “no prospect of its constituent organisations concluding an agreement while the current agenda remained on the table”.

As we have explained previously the original Croke Park Agreement reflected not only over reliance on “Social Partnership” by the ICTU leaders, but the weakness of the Fianna Fáil/ Green Party Coalition also: Croke park negotiations: Don't give an inch (9/2/13)

Theevidence from tonight’s rally is that both the Government and the ICTU leaders are going to come under increasing pressure. The trade unions which make up the 24/7 Alliance organise some 70,000 workers across the state. To get nearly 4,000 to Tallaght on a Monday night in February is a reflection of the mood under the surface.

Following on from the major demonstrations on February 9th it is evident that class struggle is back on the agenda in Ireland. The relative industrial peace in the Public Sector which followed on from signing of the Croke Park Deal in 2010 was coupled with a turn towards the political front which at one point looked as if labour could become the biggest party in the Dáil.

The capitalist crisis in the Eurozone has taken a further twist with a triple dip during 2013. This is likely to mean less trade which will affect Irish exports and place more pressure on workers and on the state finances also. The next year could see further instability and crisis in Ireland. The only way to defeat the government’s plans for the public sector is through an intransigent and militant stand from Trade Union members and their organisations. The demand for a 24 Hour General strike; which would be a big step forward in Ireland as it would demonstrate the power and unity of the public sector workers, has never been more necessary.