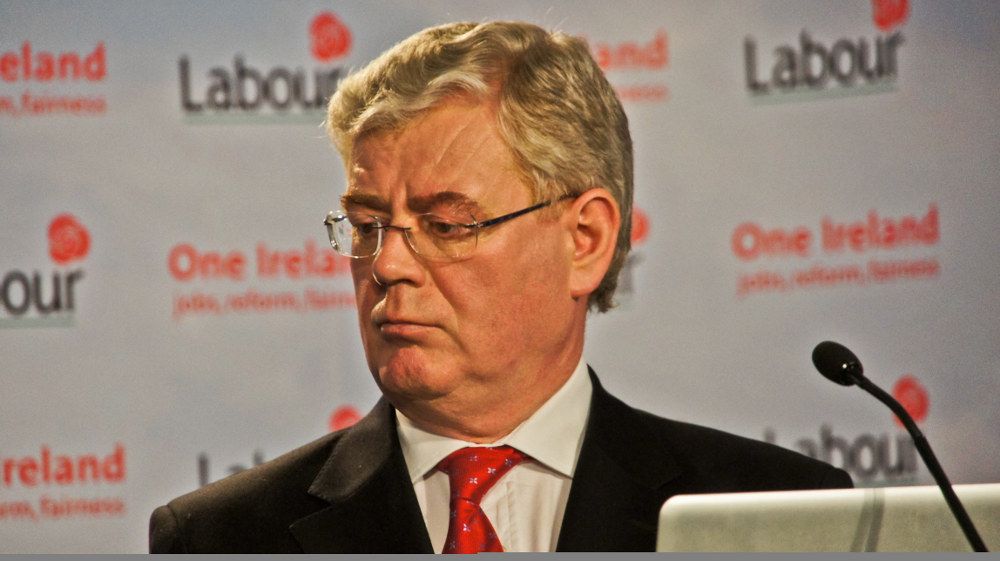 As the General Election approaches, the Labour Party leadership continues getting rid of the most radical aspects of its election programme. And, Labour Party members only get to know about these changes through the media.

The Irish Times revealed the last of such policy modifications on Monday, 31 Jan.  The commitment to introduce a top rate 48 per cent personal income tax band (now 41 per cent) for those on over €100,000 per year was to be abandoned because the Universal Social Charge (USC) introduced by the government ‘had done the job’.

There is, however, a big difference between the USC and the 48 percent personal income tax band when it comes to redistribution of wealth. The USC affects everyone while the 48 percent income tax would affect only the higher incomes. This surrendering of one of the most progressive aspects in Labour’s programme could be just aimed at facilitating a coalition government with Fine Gael (FG), a party that is completely against the introduction of higher taxation to the well off. The previous week, Fianna Fáil (FF) new leader, Micheál Martin, reiterated that the election programmes of FG and FF were remarkably similar and that FF would support a minority FG government. Therefore, the Labour Party has started making concessions even before the Election. According to the latest poll, a left wing government (Labour, SF and left-independent TDs) could be feasible, but the Labour Party has never entertained that possibility.

Another worrying sign was the anxiety of the Labour Parliamentary Party (LPP) to facilitate the passing of the Government’s Finance Bill. They argued that the reason was to allow a date for the General Election to be fixed. Formally the LPP opposed the Finance Bill, so it made more sense to push for a planned motion of no confidence and make all efforts to avoid the passing of the Bill. This contradictory strategy can only spread confusion among rank-and-file supporters and those likely to vote for the Labour Party. All this seems to indicate that the priority of the LPP is not policy change but getting in office at any price, regardless of the concessions to be made.

These sudden turns don’t go unnoticed among rank-and-file members. A recent U-turn of the LPP party on water charges went against a motion passed at the last party conference, which unanimously rejected them. This infuriated many Labour Party members, which in the end made the LPP to temporary oppose water changers on the grounds that water metering could not be introduced in a ‘timely, fair and affordable manner’.

The sudden policy changes adopted by the LPP, with disregard to motions passed at Labour Party conferences, are populist attempts to win votes led more by media pressure than by the interests of working people. There is an urge to get in office, to hold power, which constitute to most important aim of the professional politicians of the establishment. In that regard, the LPP is part of the establishment and in favour of mild ‘reforms’ only in so far as they can present themselves as a slight different political brand in respect to FG or FF.

Populist tendencies were reinforced two years ago after the reform of the party constitution. Head Office, among other things, wanted to closely control the process of selection of candidates for elections and plan campaigns according to what policies were more likely to be voted. Some argued that Head Office was trying to introduce a centralist Leninist model, but nothing was further from the truth. The aim was to run the party as a private company led by a board of directors exclusively concerned with electoral success.

On the other hand, the legitimacy of the LPP is grounded on individual election teams, normally competing among each other, which in turn are normally based on personal loyalties. Since the 1990s, after the retreat of rank-and-file activism and ‘old reformism’, Labour Party branches and constituencies almost exclusively exist to support TDs and Local Councillors.  Political differences and alternatives, when they exist, are articulated around Local Councillors and their teams to a larger extent than around TDs, who present fewer differences among each other for the time being.

The annual Labour Party conferences have little influence on the party leadership, but in the last few years there has been a growing gap between the policies proposed by the conferences and what the LPP would implement. Motions that are not considered adequate, normally the most left wing, are ‘referred back’, which means that they are killed off.

There are in fact two Labour parties, but while one (the LPP) is highly organised and possesses all the resources, the other one constitutes an amorphous mass that would need of a rank-and-file organising committee to start articulating the discontent that there is among many ordinary members and present an organised alternative to the sell out of the party leadership. The ambiguities of Labour Parliamentary Party reflect the existence of the two parties and the different interests that they represent.

It is highly likely that the Labour Party will go into a coalition government with FG, although we cannot take it for granted. This coalition government will be based on a programme not fundamentally different from that of the previous government. Their hopes are that they will be better ‘managers’ and that the global crisis of capitalism will end soon.  While it is likely that they will be better managers, the perspectives of a quick economic recovery, particularly one involving the creation of jobs, is remote. On the other hand, it is highly probably that the state won’t be able to pay its debt. Therefore, in the future we are likely to see further polarisation between ‘old reformist’ and Keynesian alternatives to stimulate the economy and further and drastic cuts to avoid state default.. The fact that these alternatives within capitalism have shown to fail in the end won’t stop their return.  A new layer of potential activists will have to relearn that the problem is capitalism itself.