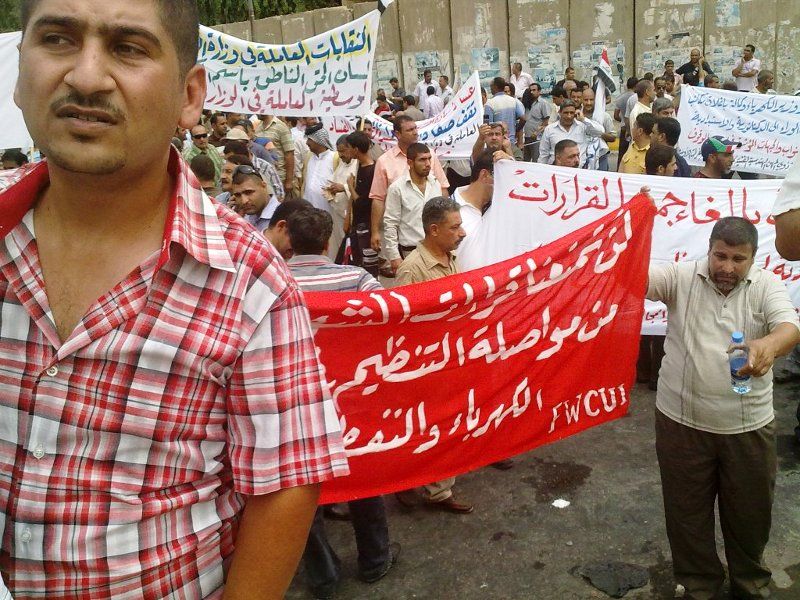 The invasion of Iraq was supposed to establish a western-style “democracy”. But when it comes to basic trade union rights there is no such democracy. Union offices are raided, closed down, union assets are confiscated and union activists are victimized. Here we have the latest example of “democracy” at work in the Ministry of Electricity. But the workers are resisting as the photos provided here demonstrate.

Act NOW! The police raided and shut down the electricity workers’ unions across Iraq in mid-July, carrying out an order from the Minister of Electricity that could have been lifted from Saddam Hussein’s rule book. The order prohibits "all trade union activities at the ministry and its departments and sites" and authorizes the police "to close all trade union offices and bases and to take control of the unions' assets, properties and documents, furniture and computers."

The leader of Britain's Trades Union Congress has called upon the Iraqi government "to withdraw the order, and allow unions to operate freely, underpinned by a fair, just and ILO-compliant labour law."

The Iraqi trade union movement is calling on trade union members everywhere to raise their voices in protest. Hussain al-Shahristani, Oil Minister of Iraq, who was also appointed Electricity Minister, issued a decree that: 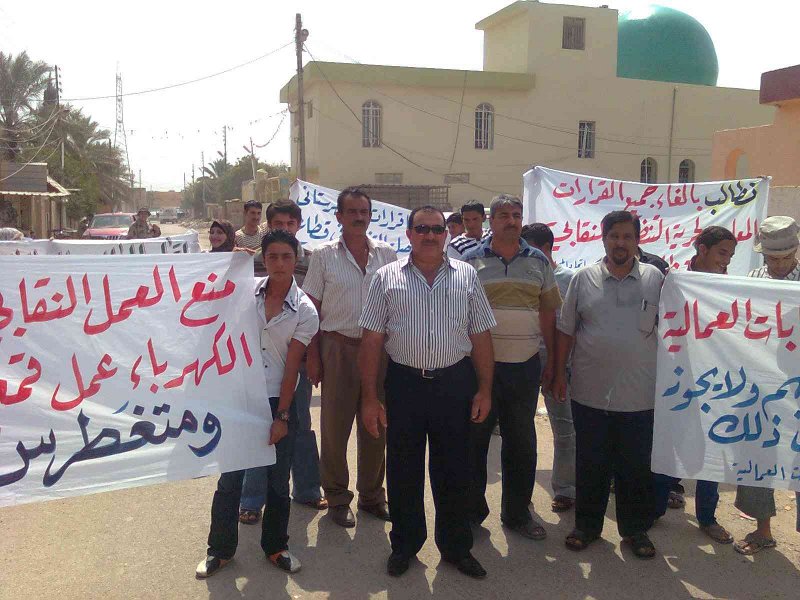 Workers protesting in Samarra. This outrageous action violates all the norms of internationally recognized labor rights. It escalates a broad attack on unions that has been taking place in Iraq since the overthrow of Saddam Hussein that has included:

Here are some photos of the workers’ demonstration against the Ministry of Interior orders to the armed forces across Iraq to be ready to attack or arrest trade unionists in the electricity sector, in case of refusal to evacuating their headquarters, according to the orders of the new Minster of Electricity, Hussein Al Shahrstani (also the Oil Minister).

[Akram Nadir is the International Representative of the Federation of Workers' Councils and Unions in Iraq, FWCUI]

We have been informed about Ministerial Order No 22 244, issued on 20 July 2010, which "prohibits all trade union activities at the ministry and its departments and sites" and orders the police to raid union offices across the country. This order is a clear violation of international labour standards which your government is obligated to uphold, and we call on you to reverse course and stop this assault on Iraqi unions.