We would like to thank all those who expressed their support and solidarity for Nawzad Baban, a leading figure in the current protests in Kurdistan and an FWCUI electricity worker activist in Sulaimania City. He was abducted on Friday, February 25 in Sulaimania with three other activists. Here we republish an interview with him Muayad Ahmad, first published by Hawpshti (Solidarity). 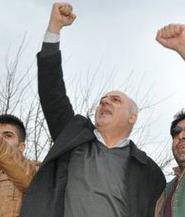 Nawzad Baban On 25th February 2011, four of the leaders and activists of the Suleimania protests were abducted. In order to shed light on this event, we at the Hawpshti (Solidarity) Broadcasting Company, interviewed Muayad Ahmed, one of those abducted. The interview was held on Monday, before the release of Nawzad Baban. You can see a video of Nawzad Baban here: http://www.youtube.com/watch?v=597EEhe1NukandNR=1.

Hawpshti: on the evening of 25th February, you along with Nawzad Baban, Shakhawan Nasih and Khalid Majeed were abducted. Over 24 hours later, you were released. Could you give us a short account of this incident?

Muayad Ahmed: Yes, as you said, on the evening of 25th February the four of us were in a taxi after leaving the protest, when we were suddenly stopped by an unknown force. We did not know who they were. They attacked us in a very uncivilized manner, in fact in a very brutal and aggressive manner. We were blindfolded and driven somewhere; I do not know where. We were driven for about half an hour, first to one place, then to another place where we were kept. We were treated in ways I can only liken to those of the Ba’ath fascists.

We were separated from each other, each in an individual room until we were released at around 11pm tonight. Of course Nawzad is still being held. Only three of us have been freed, when we were promised that all four would be released. As we were being freed, we were blindfolded and were made to believe that we would all be released. However, when we were finally out, we realised that Nawzad was not with us. This was another example of their brutal despotic treatment of us.

Hawpshti: Were you all together or separate while detained?

Muayad Ahmed: Until we arrived at that place we were able to hear each other but were not allowed to talk to each other. Then we were put in dark solitary rooms. It reminded me of what used to occur in the eighties under the previous regime.

Hawpshi: What was their motive for detaining you?

Muayad Ahmed: It is clear that they are trying to silence the protesters. They want to suppress the activists of the movement and those who are representing and expressing people’s concerns and demands, one of whom is Nawzad.

Muayad Ahmed: Nawzad is greatly loved by the protesters. I saw him being carried on people’s shoulders, all chanting slogans of admiration, on the very day that we were arrested.

Muayad Ahmed: Very good. In my view this was an organised operation – it was a planned abduction by a special security squad. In doing this they were trying to silence the protests.

Hawpshti: Do you think they can put an end to the protests using these measures?

Muayad Ahmed: I do not think so. People are on the streets raising certain demands and they expect to gain something from these demands. The sort of repression that the authorities are exercising is only going to increase people’s rage and anger.

The people have legitimate and valued demands that the authorities need to respond to. Instead, they are reacting with brutality, aggression, secrecy and gangster like actions. No one can be fooled by this. They are achieving nothing – they are just increasing people’s fury.

The demands are clear. Under the rule of these parties, society in Kurdistan has been at a standstill for years. We are now witnessing people demanding radical change, not just reform within the same system. They want a change that meets their just demands. They demand freedom, the end to party rule and party militias. The authorities talk about violence amongst the people, but by using such repressive measures, they are the real perpetrators of violence.

Nawzad Baban, who is well respected by the protesters and, as I said, was being carried on people’s shoulders, is being held captive. This shows that they are not listening to the people’s demands.

Hawpshti: Do you think the protests will continue? Because the authorities have been spreading propaganda that the 26th would be the last day of protest, but clearly it isn’t.

Muayad Ahmed: What I am seeing is that there is a great deal of public rage and discontent. Through these demonstrations, people have achieved great things and they have managed to secure a certain degree of freedom. However, the ruling parties are even trying to reduce the little freedom there is. The protesters have made huge leaps in their struggle for freedom and liberation.

Anyone who cares about the plight of Kurdistan, who cares about freedom, about abolishing the rule of these parties and party militias and their armed apparatus, in my view will not back down in the slightest and will defend these gains with their lives. People feel very strongly about this.

Of course this needs a lot of work; it needs good leadership and good co-ordination. But what is important is that these are all legitimate and just social and political demands that have a social base. The other side want to suppress these demands and people feel very passionate about all this and they want to turn it into a sacred victory.

Hawpshti: What is your final word?

Muayad Ahmed: First of all, the authorities must listen to the peoples’ demands and will. People are not on the streets to pass the time, it is not a hobby. They have genuine demands and issues affecting their daily lives.

People want freedom, prosperity, they want an end to poverty in a society full of resources, and they are rising up against inequality, against corruption that you see all around you. People detest corruption.

These are the essential issues. The authorities have no alternative but to comply with these demands and there is no other way for the people but to move forward and not back down.

We have all seen what happened in Egypt and elsewhere. People in Kurdistan, workers and toilers and freedom lovers and anyone who has the slightest interest in prosperity and a better life, have to seize the opportunity in order to play a vital role and I wish them success.