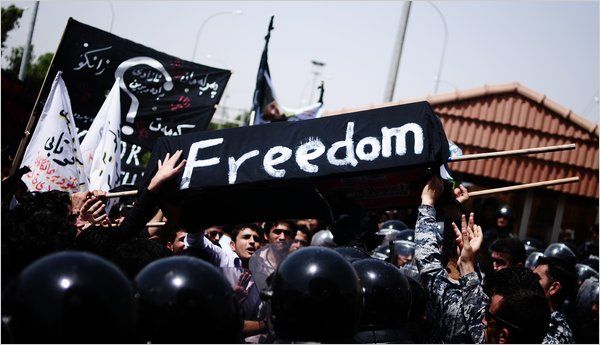 Last month’s killing of the journalist Sardasht Osman in the city of Mosul in northern Iraq was clearly aimed at silencing dissent under the Barzani regime that controls the Kurdish area of the country. It also highlights the limits of this bourgeois regime and the need for a socialist perspective in the region.

The killing of Sardasht Osman has raised the spectre of a resurgent Kurdish people in northern Iraq. The regime headed by Masoud Barzani is being held accountable, and discontent (already at an acute level in the region), has led to protests. Given the fragile measure of stability which the coalition of PUK and KDP in the Democratic Patriotic Alliance of Kurdistan (DPAK) has established, resting on the open and pervasive presence of armed militia, Iraqi and US troops, the situation is tense.

Early in May Sardasht was kidnapped in front of his school, tortured and executed and dumped 50 km away in Mosul. An outspoken critic of the President of the Kurdish Regional Government (KRG), Masoud Barzani (also head of the KDP faction in the DPAK), it is widely believed that Sardasht was targeted by the regime. The contradiction between the supposed “Democracy” of President Barzani and the open intimidation and violence of the state is radicalizing a layer of youth. From a few hundred students, journalists and activists in Erbil protests grew into the thousands in Sulaymaniya.

The protests of the students and journalists have been to the “Gorran” electoral front by the regime. But any support “Gorran” (meaning “Change”) receives is accidental. Standing on a program which cynically opposes the corruption and anti- democratic rule of the Barzani regime they represent nothing different. A split off from the PUK, their leader is the former number two in the PUK leadership, next in line to Talabani. Any criticism against Barzani from “Gorran” is to be seen in the historical animosity of the KDP and PUK, which despite an alliance are still vying with each other. Only the working class organized independently of the interests of the ruling class in the DPAK regime can solve the problems of “freedom” and “democracy” in the Kurdish region.

The official unions are state controlled; lacking real democracy the same leaders appointed in 1992 remain in power. Any independent move by the workers to organize is met by heavy repression from the regime. The majority of so- called workers’ parties are participating in the government, from the Communist, to Socialist and Social Democratic. The response of the state has been to issue a statement deploring the killing; and to form a committee headed by the Ministry of the Interior to investigate with the full assets of the state at its disposal. Security in the Kurdish region has as a result been tightened even further by the KRG.

Protestors and activists are questioning how, in such a tightly controlled security environment, with armed militia, Iraqi and US troops, private security firms and with security right at the gate where Sardasht was kidnapped, this could happen without the complicity of the state. Sardasht Osman was particularly vocal in his opposition to the Barzani regime, its corruption, nepotism and the growing wealth of a layer of parasitic local capitalists. He spoke out against the conditions of the poor and the unemployed youth. With a population mostly under the age of 25 discontent amongst the students represents a very real threat to the stability of the regime because of its potential to reach into the working class. 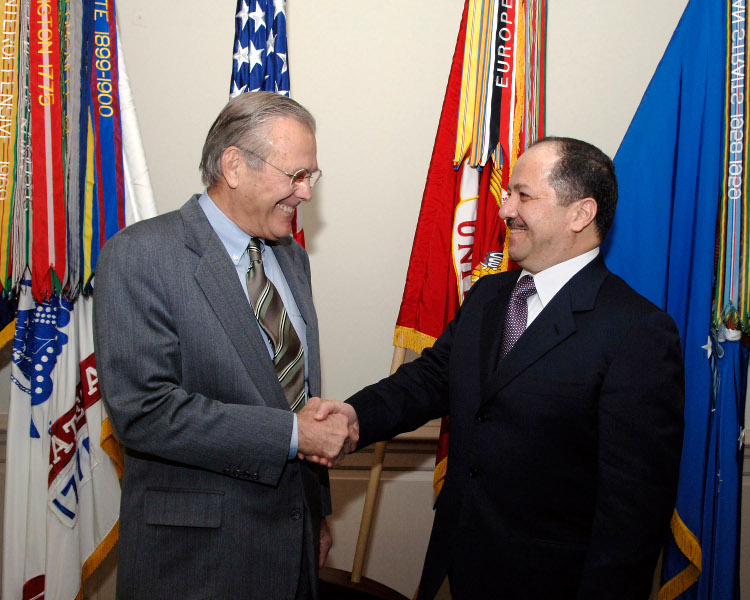 Former US Defence Secretary, Donald Rumsfeldt and Mesud Barzani. Photo by Dod/ Helene C. Stikkel. If indeed the Barzani regime is responsible for the murder of Zardasht, (and history shows violence, intimidation, and murder are typical methods for this regime), it reveals only the weakness of the state, and the lengths that it will go to in order to preserve itself.

In polite bourgeois society the press ostensibly enjoys freedom from direct interference. Of course this is an illusion, as control over the media is established through capitalist barons owning newspapers and TV channels. At bottom it is economics that determines the relative amount of “Freedom” and “Democracy” even in the wealthiest countries. So far, in the main industrialised countries it has not been common practice for journalists to be killed for their political views. However, in countries like Russia, the Philippines and Iraq (to name only a few of the places) the death toll amongst journalists keeps going up.

Capitalism, and class society, ultimately relies on armed and organized violence to maintain the dominance of the ruling class. Liberal “Freedom” and “Democracy” are thin veils for the dictatorship of the bourgeoisie, more useful in wealthy advanced capitalist countries where the threat of mass revolutionary action is a distant concern – for now. In Iraqi Kurdistan and other places where capitalist contradictions have piled up so as to create an intolerable situation for the majority, the bourgeois do not have the same luxury to allow the press its “Freedom”, or the people their “Democracy” and have to maintain their rule through open repression and violence. The ultimate way forward to real freedom and democracy can only be found through class struggle.

Problem of capitalist development in the region

Jalal Talabani, head of the Patriotic Union of Kurdistan and President of Iraq, boasts that since 2003 the number of millionaires in Sulaymaniya (one of the largest cities in the region, with over a million inhabitants) has gone from 12 to 2000; in a city of over 1 million. While a select few have gotten fat, the majority live in atrocious conditions. Figures from the United Nations Office for the Coordination of Humanitarian Affairs (July 2009) graphically illustrate the disparity. For Sulaymaniya alone the figures are as follows: Unemployment - 26% women, 10% men; Illiteracy - 43% women, 20% men; Less than primary education - 64% women, 49% men. Furthermore, in Sulaymaniya 88% of the population faces more than 11 hours of power cuts per day, or no connection to the electricity network, and 38% are not connected to the sanitation network. The numbers are either slightly below this mark, or significantly higher for the other centers of Erbil and Dohuk.

Trotsky long ago explained how in Russia the local bourgeoisie had arrived too late on the scene to play their historical role. The development of local production came through the export of capital from countries like France and Britain; Russia was a colony without having been colonized. Not generally in control of Russian capital, the local bourgeoisie was forced to cast their lot in with the Tsar, for fear of awakening the proletariat to independent mobilisation. The lessons of 1905 were important in order to understand the bankruptcy of the Russian bourgeoisie, and their complete inability to resolve any of the tasks posed to them by history. Trotsky's theory of Permanent Revolution came from this experience, and was validated entirely by the revolution in 1917 when Lenin came to draw similar conclusions. A modern nation state within the model of bourgeois democracy, the overthrow of feudalistic relations and land reform could not be achieved on the basis of the semi-feudal, semi-capitalist set as the bourgeois could not play an independent role from western Imperialists, who were quite happy to exploit the Russian workers without having to compete with Russian Capitalism in any serious way. Only when the workers seized power through the soviets in October 1917 were the bourgeois tasks completed as the socialist tasks were begun.

The same process would generally hold true in Iraqi Kurdistan. The reasons for the invasion and occupation of Iraq are well understood amongst the most class conscious elements on the political left. A glance at the business pages will show that even the most class conscious capitalists do not delude themselves with the idea that they are in Iraq to do anything but take the wealth out of the country. Jobs will, and are, being created. But wages alone do not resolve the problems of society; the problem of a progressive development of the Kurdish economy and society require a massive investment of resources into education, infrastructure, etc. This is not something that capitalists are generally interested in doing, as it cuts into the rate of profit they take.

The real solution to these problems cannot be found in capitalist development, which is tied by a million threads to the economies of the region. The past 20 years’ experience in the region shows this. Barzani’s regime has had enough time to prove otherwise, and there can be no illusion as to whose interests the DPAK and Barzani represent. Along with rival Jalal Talabani, they continue to wage an aggressive struggle within the Iraqi Federation on nationalist lines. This has international implications particularly in Turkey and Iran, but also in Syria. The Kurdish Region enjoys more autonomy than other federal regions in Iraq. It is now allowed to export its oil directly and is involving itself in International affairs, normally the preserve of the federal government in Baghdad. A strong Kurdish state in Iraq would embolden the nationalists in Iran and Turkey. And while Barzani has been trying to build a relationship with Turkey, Iran has sent in troops to set up a second post just across the border.

The struggle for “Freedom and Democracy”

Lenin always defended the most advanced freedoms possible under Tsarist rule, and supported the bourgeois democratic demands for “Freedom” and “Democracy” challenging the bourgeois to put action to words. In 1905, and again in February-October 1917, the Russian bourgeois showed their inability to follow through on the tasks history demanded of their class. Tied as they were to Imperialism and the reactionary Tsarists the threat of the workers and revolutionary youth was met with police state repression until the workers seized power leading the masses of poor peasants in the October revolution of 1917, while the corpse of the constituent assembly was put to rest with power in the hands of the Soviets. The Russian bourgeoisie were as bankrupt and incapable of resolving any of the problems of society as Barzani and the DPAK are in the Kurdish Region of Iraq today. 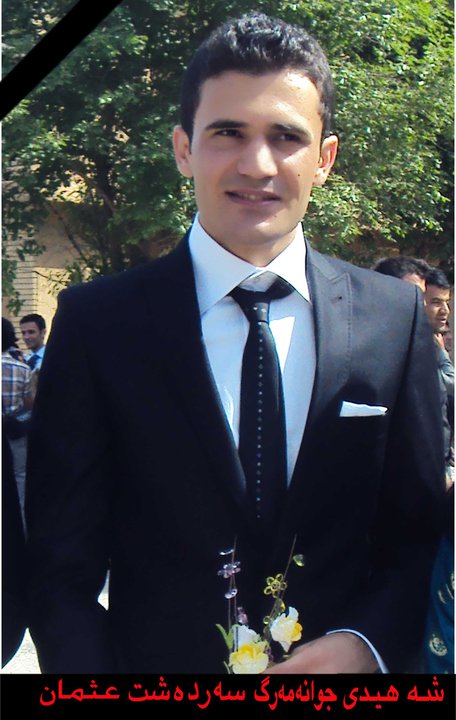 Sardasht Osman Freedom of speech and expression are important conquests for the workers, without them the independent perspective of the working class is forced into obscurity and conditions of illegality. More press freedom would lead to a vibrant discussion amongst the working class and revolutionary youth on issues of political economy, culture, etc. Of course this kind of “liberal” freedom of the press cannot be guaranteed when it threatens the continued rule of a minority. Real political freedom will start when the working class has achieved sovereignty from the dictatorship of the bourgeois by taking hold of the economy and political power and beginning a democratic management and distribution of resources within the context of a nationalized economy. This is a transitional stage in the direction of Socialism, achieved by the conquest of power by the people led by the working class.

The execution of Sardasht Osman as a voice of opposition is an important episode in the resolution of class conflict in Iraqi Kurdistan. A growing intolerance of this rotten capitalism is evident. Given the historic crisis of capitalism on a global scale no lasting measure of peace can be achieved by the workers and poor people in the region. The class struggle will become even more acute, and voices raised against the ruling class will meet ruthless opposition. As the oil wealth is developed, a powerful working class will develop with it, and the worker and their families will enter mass struggle again, taking up the tradition of the Shuras of 1991. An independent, internationalist party of the working class and revolutionary youth, basing itself on the most advanced democratic demands combined with a socialist program will be indispensable in similar conditions.